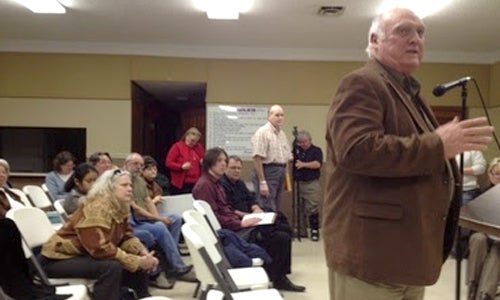 Outnumbering Peabody Energy supporters more than four to one among those willing to make public comments, outraged residents, farmers and former miners expertly broke down the inconsistencies and errors in the Illinois Environmental Protection Agency’s (IEPA) tentative determination to issue a water quality permit at a packed strip mine hearing on Tuesday in the heart of Illinois’ coal country.

It was a historic evening in Harrisburg, Illinois—only a few miles from where Peabody Coal sank its first coal mine in 1895—and for first time in decades, southern Illinois residents brought the spotlight to issues of civil rights and the state’s spiraling crisis from a poorly regulated coal mining rush.

After tolerating the reckless fallout of nearby blasting, toxic coal dust and threatened waterways of the adjoining Cottage Grove strip mine—which has left only a cemetery in the ruins of a once thriving rural community—residents and their supporters drew the line in the sand for Peabody’s request to expand its strip mine and effectively wipe out the close-knit farm community of Rocky Branch.

“They are ringing the bell for the death of Rocky Branch,” said Rita Karns, whose family has farmed and lived in the famed Shawnee Forest area for generations, “and we’ve got to stop it.”

“We the people of Rocky Branch,” declared resident Jennifer Dumberis, “we will decide what happens to us and our civil rights–not Peabody.”

Among the long line of residents speaking out against the strip mine expansion, compared to a handful of Peabody employees, Karns held up a jar of discolored tap water already affected by mine discharges, which would effectively expand into area drinking water sources and tributaries leading to the Saline River under the present permit plan. 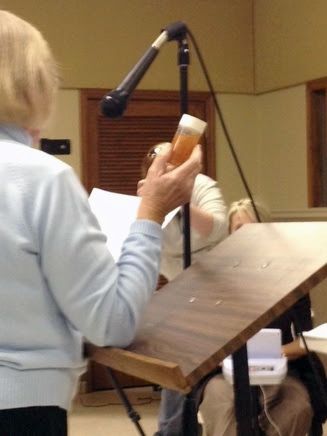 Karns holds jar of contaminated tap water taken from her home before the hearing. Photo courtesy of Jeff Biggers.

Ranging more than 1,000 acres, the mine would destroy more than 35,000 feet of natural streams, and discharge waste into area waterways.

But on the heels of a disappointing Department of Natural Resources (DNR) hearing in December, where residents say Illinois agency officials refused to accept documentation and photographs of blasting and pollution violations, Tuesday’s hearing revealed unanswered questions and troubling errors in the EPA permitting process, including incorrectly labeled streams. Only one of the the five-member IEPA panel admitted to having visited the nearby strip mine location.

And IEPA official Dean Studer repeated an earlier comment on the record that his agency had never rejected such a permit for a coal company in recent memory.

Last month, due to the Department of Natural Resources inaction, federal official were called in to make sure state officials halted illegal logging by Peabody in the proposed mining area.

At the Illinois DNR hearing in December, residents also questioned whether Peabody had already built a haulage road exit onto Rocky Branch, without proper Illinois Department of Transportation permits. 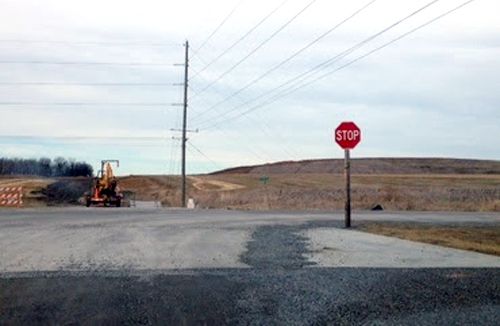 “These hearings seem to be a farce,” said Judy Keller, who sits on the Cottage Grove town council. “When there are this many questions, without any answers, it makes you wonder what’s going on behind closed doors. We call on Governor Quinn and Attorney General Madigan to come to Saline County for themselves, to see the price we are paying for this mine.”

Given the mounting administrative inconsistencies, residents now wonder if the time has come for Illinois Attorney General Lisa Madigan and her investigators to intervene in the Saline County strip mine, just as she did three years ago for the failed Banner strip mine proposal in Fulton County.

“The facts indicate that a strip mine at this location will be harmful to the local environment and the people that live nearby,” Madigan said in a statement in 2009 on the Banner mine proposal. “I am asking the court to hear the many voices from the Banner area who have expressed their concern and to reevaluate the facts regarding this permit.”

Will Madigan bring a similar justice to Rocky Branch?

Besieged residents reminded Peabody officials that their “good neighbor” policy was lacking, and challenged the company’s claims of reclamation yields on their land, water quality plans, as well as the mine’s economic impact. A study released last year actually found that the state’s antiquated tax policies, subsidies and maintenance racked up a $20 million annual deficit to support the coal industry.

Peabody, in fact, laid off 400 coal miners at the nearby Willow Lake mine in the fall of 2012, after the death of a coal miner and an MSHA ruling on safety problems. Last year, retired coal miners descended on Peabody headquarters in St. Louis to protest the loss of health benefits from a bankruptcy scheme.

That same sense of outrage dominated the hearing in Harrisburg on Tuesday. 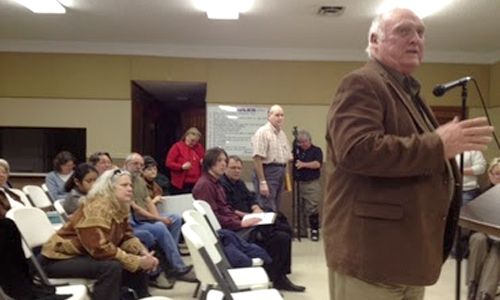 Allan Porter and other Rocky Branch residents line up to speak against the Peabody strip mine proposal. Photo courtesy of Jeff Biggers.

“The IEPA no longer has the luxury of pleading ignorance,” third-generation miner and Shawnee Forest resident Sam Stearns said.

Recalling past damages by strip mining, Steve Karns challenged the discharge allowances, and asked—without any answer—if the state or Peabody had prepared any emergency contingency in “case of acts similar to what happened in West Virginia.”

In an area historically rich in indigenous artifacts, dating back to nearby prehistoric mounds and settlements, Shawnee Vinyard Indian Settlement spokesperson Barney Bush questioned why the state was allowing mining in probable Native village sites. It was unclear if Peabody had properly carried out an archaeological survey,

“Before we totally destroy the whole thing,” said Rocky Branch farmer Allan Porter, calling on the state and federal officials to recognizing the community’s civil rights, “if we don’t consider the human side of this, we’re going to miss the whole thing. The greatest environment we need to protect is human life. Let’s consider there’s more to it than water down a stream.”