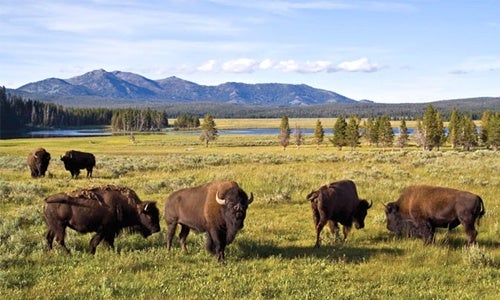 The National Park Service is scheduled to capture and facilitate the killing of up to 900 bison inside Yellowstone Park starting on Feb. 15. During the capture and kill operation, the park service closes parts of the park to public access.

Past accounts of similar bison killing operations have provided evidence of brutal treatment of the animals. The centerpiece of the park’s role in the slaughter is the Stephens Creek Capture Facility, which is located entirely within the national park. The bison are driven into the facility, held in pens, tested and eventually forced into trucks and transported to slaughter. In recent years, the park service reversed its previous policy that allowed members of the public to witness and document the operation—the park service itself shot video and photographs—and now proposes to offer only three supervised tours, including one when the trap facility at Stephens Creek was not in operation.

Yellowstone’s public information office also used to offer information on how many bison were captured, shipped to slaughter or injured each day. During the past two bison kills, however, the park delayed release of that information for two weeks.

“If the First Amendment right of access is to mean anything,” Marceau went on to say, “it means that citizens and journalists should have reasonable, non-disruptive access to their publicly-funded national park to observe and memorialize one of the most controversial uses of national park land imaginable.”

“No one wants their federal tax dollars to be used by park service rangers to abuse and kill the very animals the service is responsible for protecting,” Seay said. “The park service doesn’t want the public to see these shameful activities.”

Ketcham has written about the bison controversy for VICE, Harper’s and other magazines and websites. “I want full access to the operations,” he said, “so I can effectively report on the issue. I want to be able to see the suffering of these animals up close and thus bring readers up close.”

Although there were once tens of millions of bison throughout most of North America, today wild bison are ecologically extinct throughout their native range, with fewer than 5,000 living in and around Yellowstone National Park, the last continuously wild, migratory herds left in the nation. The animals are currently managed under the controversial Interagency Bison Management Plan; thousands of bison have been abused and killed through hazing, hunting, scientific experiments and capture-for-slaughter operations.

The purported reason for the enactment of the plan is that bison threaten to infect local cattle populations with brucellosis, a non-fatal disease originally brought to North America by European cows. Wild bison, however, have never transmitted the disease to cattle. In fact, no transmission from bison to cattle has ever occurred outside of a laboratory setting.

“Denying access to the park during this controversial publicly-funded wildlife slaughter campaign is very similar to the intent of ag-gag laws,” ALDF Executive Director Stephen Wells said. “Such laws ‘gag’ would-be whistleblowers, journalists and activists by making it illegal to record and disseminate photos or footage taken in agricultural operations. ALDF has successfully proven ag-gag laws are unconstitutional under the First Amendment and we are confident we will do the same in this case.”

The coalition of law professors, non-profit lawyers and private attorneys are joined by a team of top law students at the University of Denver and they are all eager to aggressively litigate the free speech rights of journalists seeking to document the trapping of bison within national park lands.