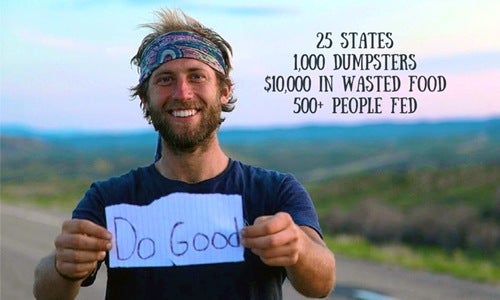 It took diving through a dirty dumpster for me to realize that food waste in the U.S. is an absolute fiasco. 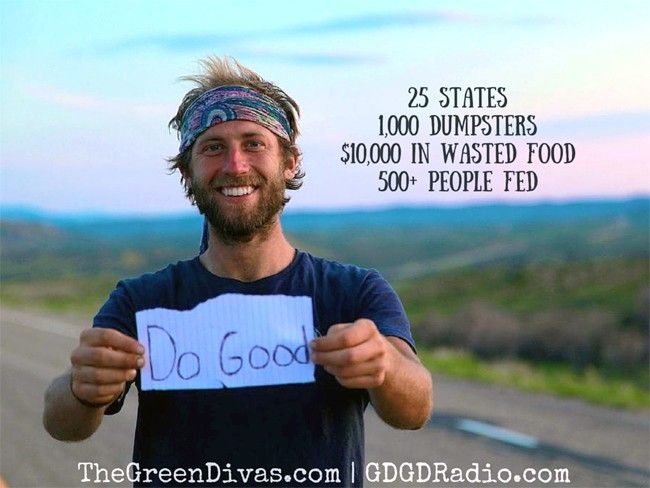 Rob Greenfield went dumpster diving in about 1,000 dumpster in 25 states across America.

You may have already heard a few appalling facts about wasted food, but just in case you haven’t, here are a few tidbits of information to catch you up on the issue:

1. We throw away 165 billion dollars worth of food per year in America.

2. Thirty one percent—or 133 billion pounds—of the 430 billion pounds of the available food supply at the retail and consumer levels in 2010 went uneaten. Grocery stores were responsible for throwing out 10 percent of that.

4. To create just the amount of food that ends up in the landfills we waste enough water to meet the domestic water needs of every American citizen.

Even with these mind-blowing statistics, you probably still need to see it to believe it. That’s where I come in.

I’ve been in the bottom of around 1,000 dumpsters in 25 states across America to show people what Americans are throwing away. And it’s good stuff. 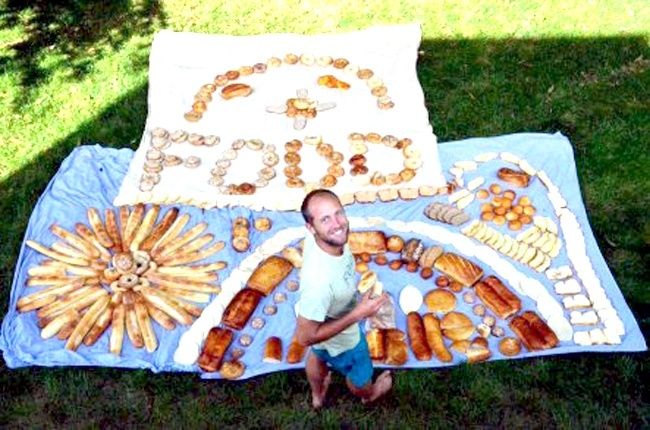 This is what a typical dumpster score looks like.

In major cities across America I have hosted “Food Waste Fiascos” in which I went out dumpster diving, usually just for one night, and set up my find in a public park the next day. Many people were shocked by what I showed them and even more were angry, not at me, but at the waste of our society when millions of Americans are hungry. I had just a few days at most in each city to pull these fiascos together. 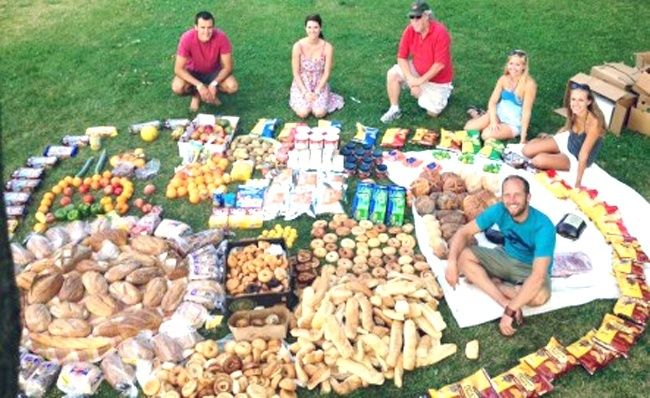 Here’s what my friend Dane and I managed to scrounge up in Madison, Wisconsin in two days.

I found a volunteer via social media with a vehicle to help in each city since I couldn’t carry all of the food on my bicycle. 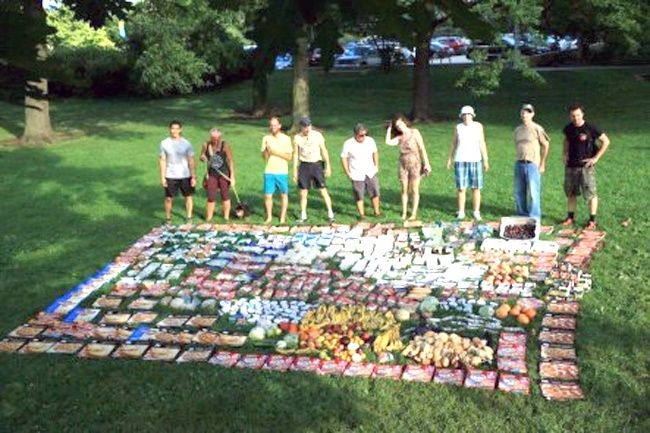 This was is what we gathered in Chicago, Illinois.

None of the volunteers even had dumpster diving experience and I was completely new to the dumpster scene in each city. 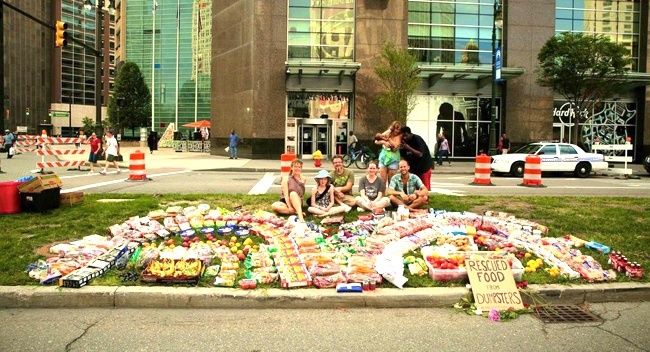 In Detroit, Michigan we started diving in the morning and the car was filled with this in two hours.

In Cleveland, Ohio we spent seven hours at the dumpsters the night before the event and brought this food to Cleveland Public Square. It was 90 degrees that day so much of the food we found in the dumpsters was spoiled. 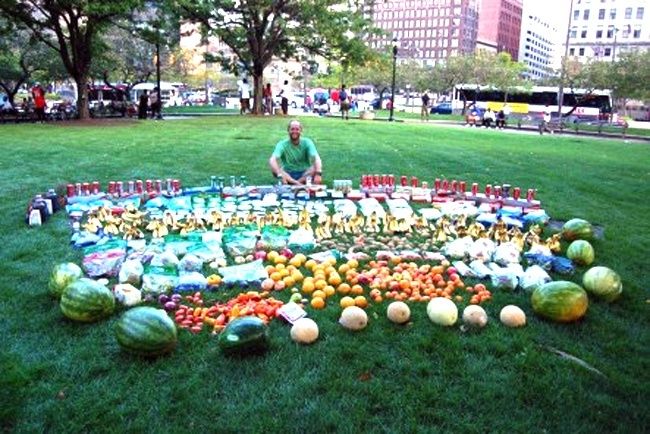 This is just the good stuff that we pulled out of Cleveland dumpsters.

In Lancaster, Pennsylvania we had two vehicles and we hit about 10 dumpsters between the two teams. 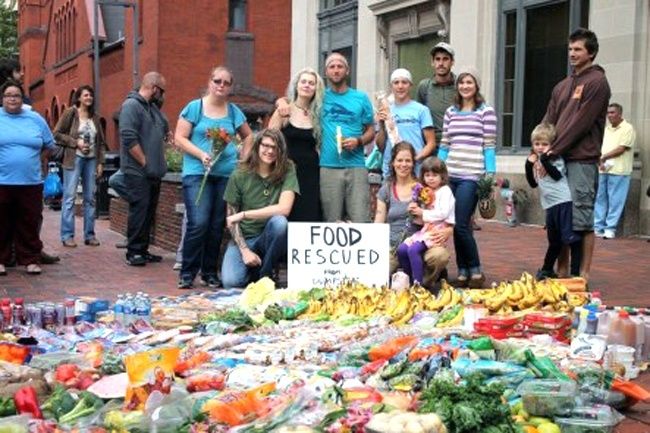 This is what we took home in four hours in Lancaster.

In New York City, I was greeted by the people behind Freegan.info. 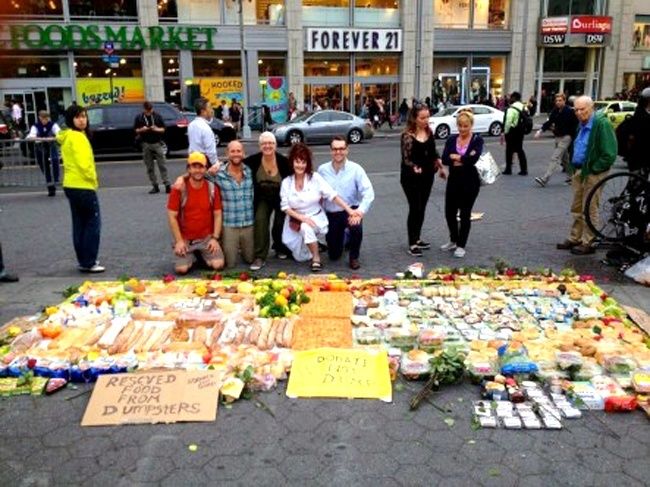 In one night of walking around the streets of Manhattan we scrounged together this fiasco.

Amazingly in one of America’s most environmentally friendly cities I turned up as much wasted food as anywhere else with minimal effort. 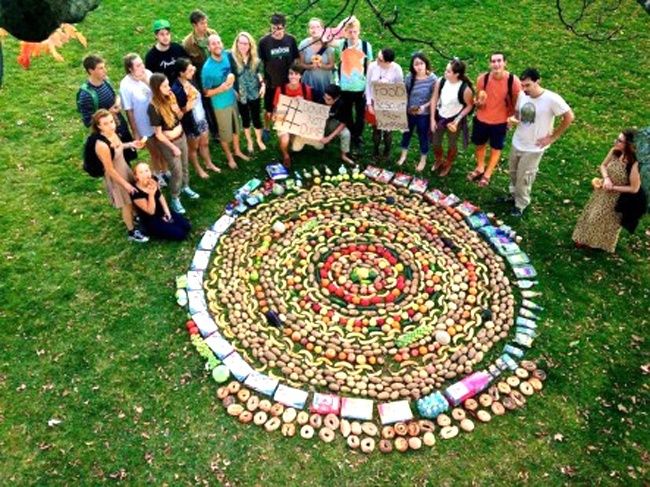 The food was still very high quality stuff but I never intended to even give it away. I just wanted to show people what’s being wasted. But then people started to take the food and that made the mission all the better. Between all of the demonstrations that I hosted we ended up giving away more than $10,000 worth of food and fed well more than 500 people. To me that’s proof of how good the food is that we’re throwing away.

I’ve learned that I can roll up in nearly any city across America and collect enough food to feed hundreds of people in one night. The only thing that limited me was the size of the vehicle I had to transport it. My experience shows me that grocery store dumpsters are being filled to the brim with perfectly good food every day in nearly every city across America, all while children at school are too hungry to concentrate on their studies.

A win-win for grocery stores to donate, not dump.

And the crazy thing is, it’s a win-win situation for grocery stores to donate this food to non-profits rather than dump it. They are protected from lawsuits by the Good Samaritan Food Act, they get tax write offs, they spend less on dumpster fees, and most importantly they are doing what is right for their community when they donate their excess food.

The most common excuse for not donating is that they fear liability but they’re protected and, according to a University of Arkansas study, not a single lawsuit has ever been made against a grocery store that has donated food to a food rescue program.

Thousands of food rescue programs, such as City Harvest, Feeding America and the Food Recovery Network are already feeding people across America and thousands of stores are already donating to these non-profits and food banks. However, it’s a very small fraction of what could be done. We need more stores donating more often and we need them to compost what they can’t donate rather than sending it off to the landfill.

I believe that we are at a tipping point for ending food waste and with citizen action we can solve this. The excitement inside me tells me that my generation will drastically reduce food waste in our time.