Scotland Restores Its Peatlands to Keep Carbon in the Ground 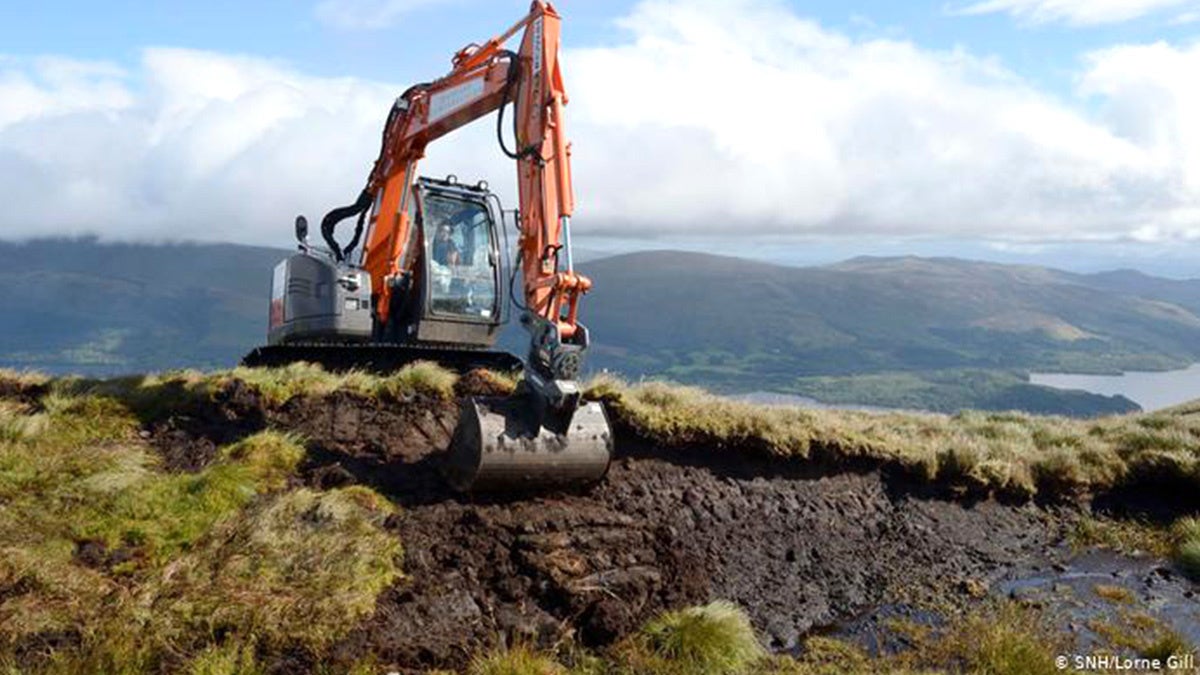 The burning Amazon rainforests, with their jaguars, monkeys and colorful birds, have grabbed global attention in a way the destruction of the world’s mossy peatlands never has.

Yet protecting the world’s peatlands, which store at least twice as much carbon as forests, is critical in the fight against climate change.

Peatlands, also known as bogs, are created when the remains of plants are submerged in waterlogged lands, turning them over time into peat with the plants’ carbon still stored inside. They cover around 3% of the world’s land and are found in 175 countries, mostly in northern Europe, North America and Southeast Asia.

Scotland has a particularly high coverage, with bogs amounting to 20% of its land (roughly 1.7 million hectares) mainly in its lesser-populated north and western islands.

However, the Scottish government estimates that roughly a third of the country’s total — roughly 600,000 hectares — have been degraded. Scotland’s peatlands, created mostly in areas left water-logged from the melting of Ice Age glaciers, lay untouched for thousands of years until farmers began to drain the land, building ditches so the water would run downhill into rivers.

While such ditches date back to Roman times in parts of Britain, their building intensified in Scotland in the 1950s with the advent of new machinery and government grants aimed at improving grazing. 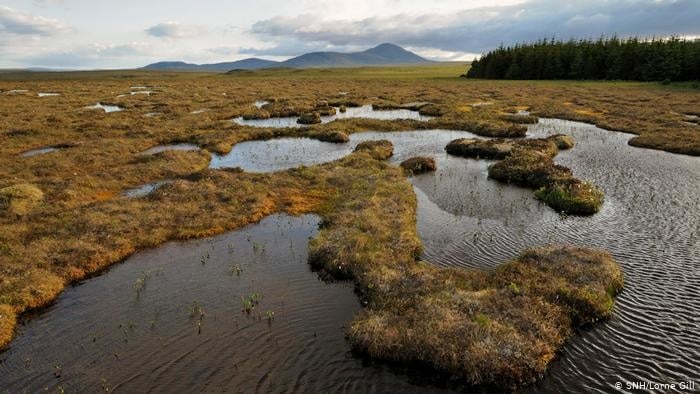 Peatlands in Scotland cover roughly 20% of its land.

Without the bogs’ acidic water there to preserve them, the dead plants in the peat start to degrade, releasing their carbon into the atmosphere as carbon dioxide. The degradation is sped up by the sun and wind they are exposed to without their water coverage.

To correct past mistakes, landowners are being offered grants by the Scottish government to block the drainage ditches their predecessors were encouraged to dig. A total of €16.3 million ( million) has been made available this year. The hope is that 50,000 hectares will have been restored by the end of 2020, and 250,000 hectares by 2030.

The restoration happens in two ways according to Andrew McBride, who works for Scottish Natural Heritage, the government agency responsible for handing out grants. It can either involve a ditch being filled in with peat from nearby, or a wooden dam being built inside the ditch to slow down the loss of water and spread it across the bog.

When the ditches are blocked, rainwater increases the water level, erosion stops and within two years, plants such as moss return. Within five to fifteen years, the bogs are back to fully functioning, McBride said.

“We want to do things as quickly as possible,” he told DW, “because obviously there’s a climate emergency.”

McBride says that landowners are often keen for restoration on their property as the farming benefits of drainage were not as great as previously thought. It only really improved the land right next to the bog, he says, adding that the drainage of ditches cause its own problems. On large estates, wandering sheep often fall into the ditches and can’t get out. 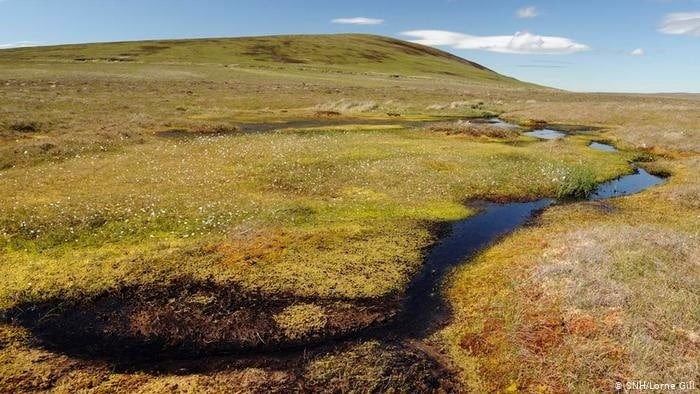 Peatlands can store up to twice as much carbon as forests.

Scotland is also trying to restore bogs by cutting down trees. In the 1980s, the UK government introduced tax incentives encouraging landowners to drain bogs to plant trees. This was a double hit — first drainage dried the land and then the trees sucked out even more of the moisture.

Although the trees absorbed carbon as they grew, that didn’t cancel out the amount of carbon released into the atmosphere by the peatlands’ destruction.

Protests from conservationists eventually ended the tax incentives and now even the Scottish government agency Forestry and Land Scotland is aiming to transform 2,500 hectares of forest back into peatland over five years.

Sheep and deer that eat and trample the plants are the third major threat to peat bogs. With natural predators such as wolves and lynx, long exterminated, deer have overrun much of Scotland, damaging many of its ecosystems. To try and control their numbers, deer management groups have been set up across Scotland.

The groups are set up by neighboring landowners who work to keep deer numbers down, mainly by shooting the older animals. “Increasingly, deer management groups are expected to coordinate peatland projects and woodland extension projects as a contribution to the climate change agenda,” said Richard Cooke, chair of the Association of Deer Management Groups. 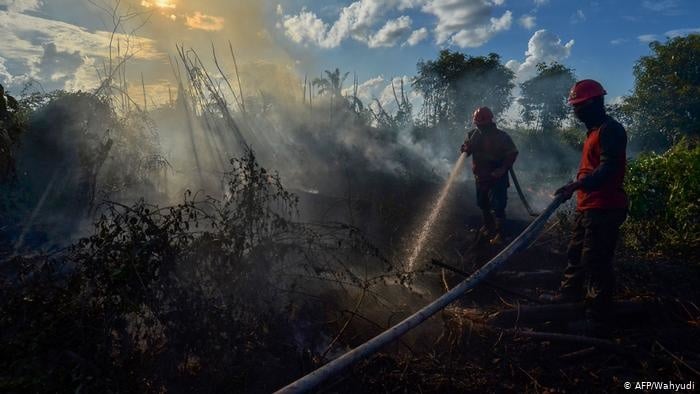 Firefighters dealing with peatland fire in Indonesia earlier this year.

In April 2019, Scotland declared a ‘climate emergency’ and its government aims to reach ‘net zero’ emissions by 2045. Emissions from peatlands are not currently included in the UK’s official estimates but they will be in the future so unless they are restored, reducing Scotland’s emissions will be much harder.

Bogs across the world, and particularly in Europe, face similar problems to Scotland. Hans Joosten, a leading researcher on peat bogs, told DW about half those in Europe have been drained, particularly in the densely populated western, central and southern regions.

Across the world, countries are trying to restore their bogs like Scotland. In South Africa, conservation has been combined with poverty relief as the government’s €56.6 ( million) ‘working for wetlands’ program has created 15,000 jobs in rewetting and controlling the erosion of 20 bogs. 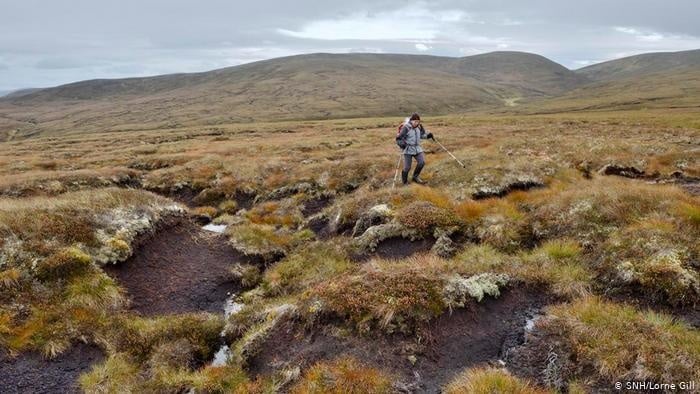 While there has been no major new drainage in Europe since 1990, it continues elsewhere. Malaysia and Indonesia now account for half of the world’s peatland emissions. Their tropical bogs have been drained so that products like palm oil can be grown, leading to frequent wildfires. In Uganda and Peru’s Western Amazonia, peatlands are also increasingly being drained for agriculture.

Joosten dedicates his life to restoring bogs but is keen to emphasize that natural solutions will only ever be part of the solution to climate change. “Peatlands are not going to save the world,” he said. “We have to reduce our emissions ourselves, that will never be compensated by peatlands or by other ecosystems.”