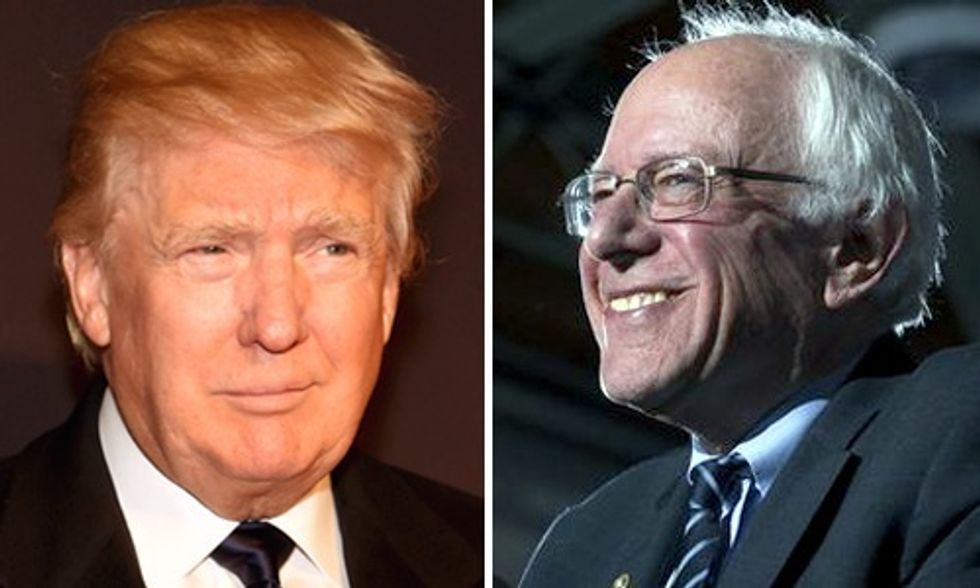 New Hampshire resoundingly rejected the two major party’s mainstream candidates in its presidential primary Tuesday, with Bernie Sanders decisively beating Hillary Clinton on the Democratic ticket and Donald Trump overwhelming a pack of governors and U.S. senators who cannot seem to stop him.

Sanders’ 21-point victory over Clinton, though not unexpected after surging in recent polls, was a monumental achievement for a candidate who started out with less than 5 percent of the vote (trailing by 44 percent at one point last year) and calling for a revolution to fundamentally address economic and political inequality.

“We won because we harnessed the energy and the excitement that the Democratic Party will need to succeed in November,” Sanders said. “What the people here have said is that given the enormous crises facing our country, it is just too late for the same old, same old establishment politics and establishment economics: the people want real change.”

“What the American people are saying,” he continued—“and by the way, I hear this not just from progressives, but from conservatives and from moderates—is that we can no longer continue to have a campaign finance system in which Wall Street and the billionaire class are allowed to buy elections. Americans, no matter what their political view may be, understand that that is not what democracy is about. That is what oligarchy is about!”

But Sanders was not the only candidate striking populist notes. In her concession speech, Clinton spoke passionately about tackling much the same agenda as Sanders—not just economic and social justice, but taking on Wall Street and campaign finance reform.

“People have every right to be angry,” Clinton said, “but they’re also hungry—they’re hungry for solutions. What are we going to do? And that is the fight that we are taking to the country. What is the best way to change people’s lives, so we can all grow together? Who is the best changemaker? And here’s what I promise: I will work harder than anyone to actually make the changes that make your lives better."

That question, who is the best change agent, will surely be a centerpiece of Clinton’s campaign as she moves on to the next states. But she also sounded different, not talking about fine-print solutions but speaking emotionally while saying she knows how best to take on Republicans.

“In this campaign, you’ve heard a lot about Washington and about Wall Street,” she said. “Now Sen. Sanders and I both want to get secret, unaccountable money out of politics. And let’s remember, Citizens United, one of the worst Supreme Court decisions in our country’s history, was actually a case about about a right-wing attack on me and my campaign … So yes, you’re not going to find anybody more committed to aggressive campaign reform than me.”

Whether Clinton and her team will seriously embrace the core economic message that the Sanders campaign has been riding on—inequality, health care and reining in Wall Street—remains to be seen. Clinton also acknowledged in her speech that she is not winning among the vast majority of younger voters, who are drawn to Sanders and said she would try to win their support. And early in Sanders' victory speech, he signaled the possibility he might come up short in the nomination contest, saying it was critical that all Democrats were united in the fall, “because the right-wing Republicans we oppose must not be allowed to regain the presidency.”

Trump’s victory was also not surprising given his months-long lead in the polls. But after placing second after Ted Cruz in ultra-religious Iowa, Trump won across all Republican demographics in the media’s New Hampshire exit polls, including among more highly educated voters, one of the demographics Trump wasn't supposed to win. Even though he won with 35 percent of the vote, that shows his base of support is widening, which is more than disconcerting to the GOP’s Washington-based establishment.

Traditionally, outsider candidates split a small slice of a party’s electorate and remain in the single digits while a more mainstream presidential candidate draws increasing support as the nominating season unfolds. But exactly the opposite is happening in 2016 for the Republicans, as their pack of governors and U.S. senators hover in the teens or less, percentage-wise and will soon have to decide if they will stay in the race.

As it stands, the GOP frontrunners are the party’s outsiders, Trump and Ted Cruz, who won Iowa’s caucuses. The second-place New Hampshire winner, Ohio Gov. John Kasich, roughly garnered one in six votes, 16 percent, which will boost his campaign as the next contests appear in Nevada and South Carolina. Kasich raised a fraction of the other establishment candidates, but rose in the polls on a very positive message and an impressive TV debate performance. Cruz, Jeb Bush and Marco Rubio gathered 11.5 percent, 11.2 percent and 10.4 percent, respectively, with about three-quarters of precincts reporting.

Trump’s victory speech also struck populist notes, but of a decisively right-wing nature except for his attack on the money, power and influence of special-interest lobbyists. But that didn’t stop Trump from going after Sanders, after congratulating him on his victory.

“First of all, congratulations to Bernie; in all fairness, we have to congratulate him,” he said. “We may not like it. But I heard part of Bernie’s speech. He wants to give away our country, folks. He wants to give away—we’re not going to let it happen. We’re not going to let it happen. I don’t know where it’s going with Bernie. We wish him a lot of luck.”

Then Trump congratulated himself for not relying on fundraising from wealthy donors and lobbyists, saying, much like Sanders and Clinton, that those fixtures of the political culture are inherently corrupt and anti-democratic.

“I think one of the things that really caught on—it’s very important—self-funding my campaign,” he said. “This is on both sides, the Republican side, the Democratic side, money pouring into [negative] commercials. These are special interests, folks. These are lobbyists. There are people that don’t necessarily love our country. They don’t have the best interests of our country at heart. We’re not going to let it happen. We have to do something about it.”

Sanders doesn’t have a super PAC, which would allow donors to flout legal loopholes to get around individual campaign contribution caps and give millions. He said he has more than 1 million donors who have given 3.7 million times, averaging $27.

On the Republican side, the contest gets trickier. In South Carolina, there’s a sizeable evangelical population that’s akin to Iowa, which appears to favor Ted Cruz. And in Nevada, Trump, whose fortune comes in part from the casino business, is a well-known figure, especially in Las Vegas.