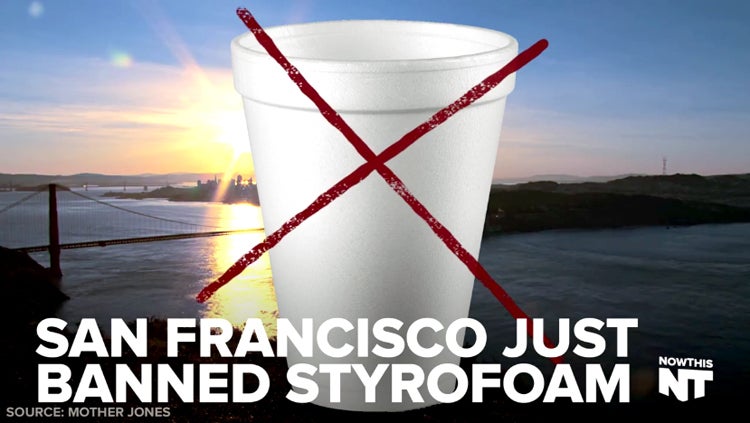 San Francisco residents will soon have to drink their to-go cups of coffee out of something else, because those soft Styrofoam cups will be no more.

The San Francisco County Board of Supervisors unanimously passed a ban last week on the sale of polystyrene foam, popularly known by the trademarked name Styrofoam. Foam packing, cups and mooring buoys will be prohibited starting Jan. 1, 2017. 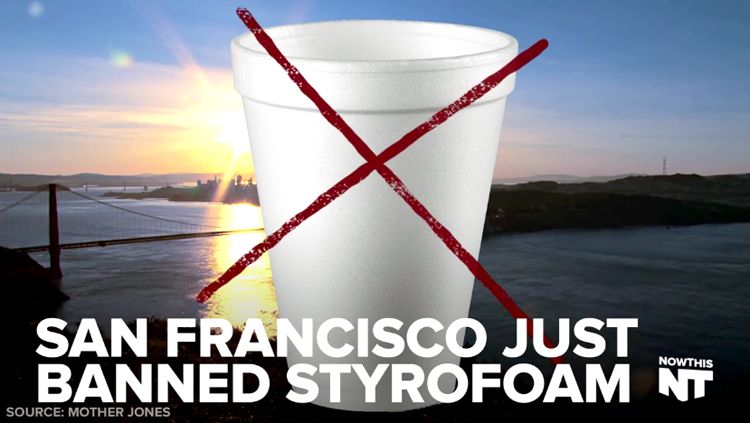 “I just passed the toughest anti-Styrofoam law in the country and we did it unanimously,” Board of Supervisors President London Breed wrote on her Facebook page after the vote. “This is a huge step for our environment and health. San Francisco is on our way to leading the country on environmental policy—again!”

Breed spearheaded the latest ban, extending a 2006 ordinance that ordered prepared-food merchants to stop using all polystyrene containers. Plastic foam products for crafts and insulation will not be affected by the ban.

“The reason why this was passed is that it’s not practically recyclable, causes a unique harm in the environment and there were better alternatives,” Jack Macy, commercial zero waste senior coordinator for San Francisco’s Department of the Environment, told TakePart.

Polystyrene disintegrates slowly in landfills, taking centuries to break down entirely. There are a few polystyrene recycling centers in San Francisco, such as GreenCitizen and Recology, but they can only make a small dent in the 25 billion polystyrene to-go cups Americans throw away annually.

While there’s been promising research on worms that eat polystyrene, scientists need to study their waste to make sure whatever is processed is safe. Environmentalists are also concerned about polystyrene foam ending up in the water, where the material falls apart and can look like fish eggs to hungry predators.

“The main challenge posed by Styrofoam is that it breaks into tiny little pieces, especially outside in the sun when it photodegrades,” Allison Chan, the Clean Bay Campaign manager for the Oakland, California–based organization Save the Bay, told TakePart. “It looks more and more like food and makes them feel full and really, they’re malnourished and they can die from that condition.”

Critics of the ban said it will hurt supermarkets that use polystyrene trays for meat by not giving them enough time to make a switch to other food-safe packaging. The Board of Supervisors granted grocers a six-month waiver, however, to find eco-friendly packaging for meats and fish.

The American Chemistry Council disagreed with the wording of the ban, which it believes ignores the positives of using the foam and makes an assumption that substituted packing materials will be recycled at a higher rate.

“We share the city’s dual goals to increase the amount of material diverted from landfill disposal and reduce materials that may be inadvertently littered in the environment,” the council wrote in a letter to Breed. “However, we respectfully oppose the ordinance as drafted.”

The council also wrote that the Food and Drug Administration “has approved polystyrene for food contact applications and the food safety benefits of plastic foodservice packaging, including polystyrene, are undisputed. Its inherent insulation properties maintain food temperatures and help keep food fresh, hot or cold and ready-to-eat.”

The polystyrene ban is part of San Francisco’s comprehensive zero-waste plan. Taxing cigarette purchases to fund cleaning cigarette butts off sidewalks and requiring new buildings to have water-bottle filling stations are some of the city’s other environmental policy initiatives. More than 100 cities, including Seattle, St. Louis and Miami, have banned polystyrene foam packaging partially or completely.

This article was reposted with permission from our media partner TakePart.