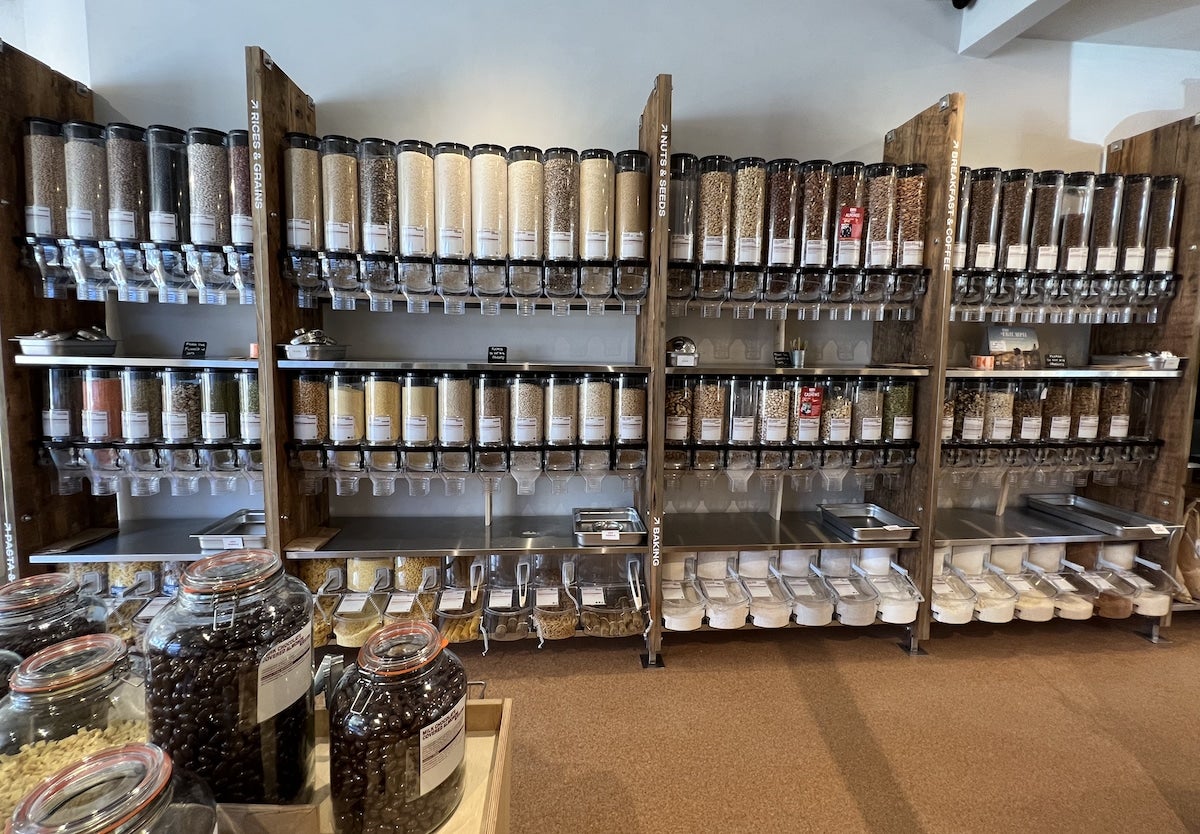 Dried beans, grains, pasta, nuts, and coffee are beside bins of cooking staples like flour, baking soda, baking powder, and sugar. A refrigerator on the wall opposite holds industrial-sized jars of olives, racks of eggs, and metal trays of fresh produce, and a freezer is stocked with plastic bins of frozen fruit and vegetables. Prepared snacks like dried mangos, wasabi peas, gummy bears, and chocolate-covered nuts fill glass jugs on the center tables.

The back of the store has shelves of metal dispensers filled with oil and liquid condiments – like soy sauce and vinegar – glass jars of loose spices, and a table of multi-gallon pump bottles of laundry detergent, shampoo and conditioner, body lotion, and other personal care products.

Each of these large containers indicates the price per pound of the product inside, as well as its ingredients and origins – and, most notably, there is no packaging in sight. Customers come to the store toting their own containers – empty pasta sauce jars, coffee canisters, kombucha bottles, plastic yogurt jugs, and cloth produce bags – to fill with groceries.

Maison Jar is one of many zero-waste “refilleries” popping up across the country, where customers can use their own vessels to fill with goods, rather than using single-use plastic containers provided by the store or selecting from pre-weighed, pre-packaged bulk products.

Before opening the store this March, founder and owner Larasati Vitoux had worked for a natural ingredient manufacturer and earned a certificate in sustainability and food systems. After returning home to France for a visit, Vitoux – who has lived in New York City for 10 years – noticed a change in how the French were doing their grocery shopping.

“I saw there were more and more package-free grocery stores,” she told EcoWatch in an interview.

While a relatively new concept in the U.S., refilleries like Maison Jar are far more common in Europe: Glaskiste in Freiburg, Germany opened in 2017, and Negozio Leggero – which began in Turin, Italy in 2009 – now has more than a dozen locations across the country. This trend in waste-free shopping has arisen in response to our plastic pollution crisis, with plastic now found in the depths of the ocean, on remote islands, atop the highest mountains and even within our own blood.

Packaging accounts for a quarter of all landfill waste, according to the U.S. Environmental Protection Agency, much of which is food packaging. While there are no national bans on single-use plastics in the U.S., individual states and municipalities have been cracking down on this waste.

California, Connecticut, Delaware, Hawaii, Maine, New York, Oregon, and Vermont all have some form of plastic bag ban, as do several larger cities like Boston, Chicago, Los Angeles, San Francisco, and Seattle. New Jersey is instating a sweeping plastic ban to begin in May, which will include both plastic bags and carryout containers. Individual franchises are also making changes; supermarket giant Wegmans has committed to banning plastic bags from all of its stores nationwide by the end of the year.

At Maison Jar, customers must bring their own containers (and bags, of course), or purchase one of the reusable jars sold at the store. A box by the counter also holds donated and sanitized containers if you leave your own at home.

Small scales are stationed on tables around the store, where customers weigh their container – a process that’s sometimes called “tareing” at bulk food retailers – and write the number on a piece of masking tape affixed to the outside. They then fill the container with whatever product they wish, using the provided scoops and funnels, and note the name of the product on a sticker.

At the checkout counter, the weight of the empty container is deducted, and the customer is charged for the product by the pound.

Maison Jar follows in the footsteps of other refilleries in the Tri-State area, like The Refill Room in Hastings-On-Hudson, New York, and the Good Bottle Refill Shop in Montclair, New Jersey (which also buys back bottles from goods sold online to be refilled and reused in future orders).

Many zero-waste shops are finding ways to innovate and make their products more widely available, including Refillery LA in Western California, which has a mobile van that sells personal care products and household cleaning supplies along its route.

While eliminating plastic packaging is a major aspect of Maison Jar’s environmental ethic, Vitoux emphasizes that their efforts go far beyond this. Every morning, she rides her bike to a local bakery to pick up bread (which they also sell by the pound), and the store sources almost entirely from local vendors, like the nearby Brooklyn-based Variety Coffee Roasters, and Café Grumpy, which supply freshly roasted coffee beans.

“We have some closed-loops systems,” says Vitoux. “For instance, for our coffees: they come with their buckets, we put them in the silos, we give them back the empty ones.”

Much of the store’s dry goods come in 25-pound packages, wrapped in an air-tight plastic liner to keep the product fresh, which is then recycled with Terracycle.

“One of the most important things is the selection of our products,” she says. “We really focus on having organic – produce especially. I really think it’s a better way of harvesting and cultivating today.”

Vitoux does, however, consider cost when choosing her products.

“I really try and be careful with price,” she says. “I want to be as accessible as possible.”

She says that, if the organic alternative to a product is prohibitively expensive, she will often choose the conventional variety to make the product more accessible, allowing customers to view the store as a one-stop shop for all of their grocery needs.

“It really makes a difference that you don’t need to buy some almonds to have three-quarters of it sit for a month and half.”

While Maison Jar only opened its doors a month ago, Vitoux is already considering the future of the store, which could include delivery options and workshops with sustainability professionals.