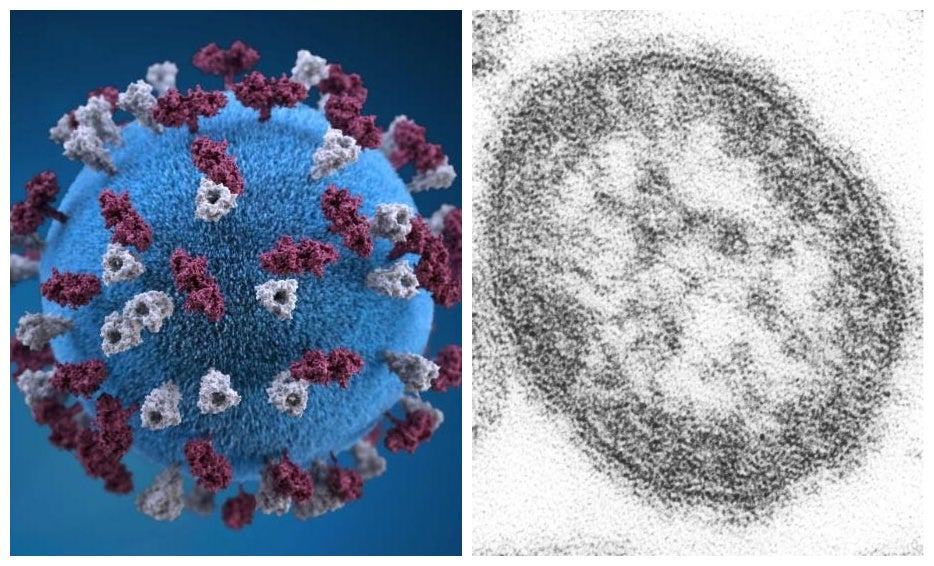 (L) 3D graphical representation of a spherical-shaped, measles virus particle that is studded with glycoprotein tubercles.
(R) The measles virus pictured under a microscope. PHIL / CDC

The Pacific Island nation of Samoa declared a state of emergency this week, closed all of its schools and limited the number of public gatherings allowed after a measles outbreak has swept across the country of just 200,000 people, according to Reuters.

In declaring the health emergency, officials said they were anticipating the worst to come, according to a post on Facebook, as the New York Times reported.

The tiny country that is just south of the equator in the Pacific ocean, half way between New Zealand and Hawaii, has seen at least 716 suspected cases of measles, over 40 percent have required hospitalization. The six deaths were mostly infants under two, according to Reuters.

Nearly 100 people remain hospitalized with 15 in intensive care. The National University of Samoa, the island’s only university, told students to stay home and indefinitely postponed exams, according to the New Zealand Herald.

The government announced that official plans for compulsory measles, mumps and rubella (MMR) immunizations would be published on Monday, according to Deutsche Welle.

“MMR vaccinations for members of the public who have not yet received a vaccination injection is now a mandatory legal requirement for all of Samoa,” it said.

Also, on Friday, the Samoan government declared that measles vaccinations would be mandatory. It also planned to limit exposure by prohibiting children under 17 gathering in public or entering medical centers unless they are sick, according to the New York Times.

However, vaccinations rates in Samoa are extremely low. The numbers plummeted after two nurses incorrectly mixed a vaccine with an anesthetic, which killed two infants, the Australian Broadcasting Corporation reported. The immunization rate fell to as low as 30 percent last year from about 60 percent in 2016, according to figures from the World Health Organization, as The New York Times reported.

Those numbers stand in stark contrast to the nearby islands of Fiji, Tonga and American Samoa where outbreaks have been reported, but nearly 90 percent of children have been immunized, which is near the requisite number needed to prevent an epidemic, as the New York Times reported.

“The way it is going now and the poor (immunization) coverage, we are anticipating the worst to come,” said Samoa’s Director General of Health Leausa Take Naseri, as Reuters reported. He added that the children who died had not been vaccinated.

Experts have criticized the Samoan government for a slow and inadequate response to the outbreak.

“It’s as bad as you’re seeing and probably worse,” said Dr. Helen Petousis-Harris, a vaccinologist at the University of Auckland in New Zealand, as the New York Times reported. “This is very much out of control.”

Nearby countries have offered nurses and vaccinations to help stop the outbreak. Winston Peters, the New Zealand foreign affairs minister, said today that his country would send 18 more vaccination nurses, upping their total to 30, along with 3,000 units of the vaccine.

“Measles is highly contagious, and the outbreak has taken lives in Samoa,” Peters said in a statement, as Reuters reported. “It is in everybody’s interests that we work together to stop its spread.”

Australia also sent medical aid and 26 practitioners with supplies and a portable intensive care unit. American Samoa announced that travelers coming from Samoa must provide proof of measles vaccination or they will be denied entry, according to the New York Times.