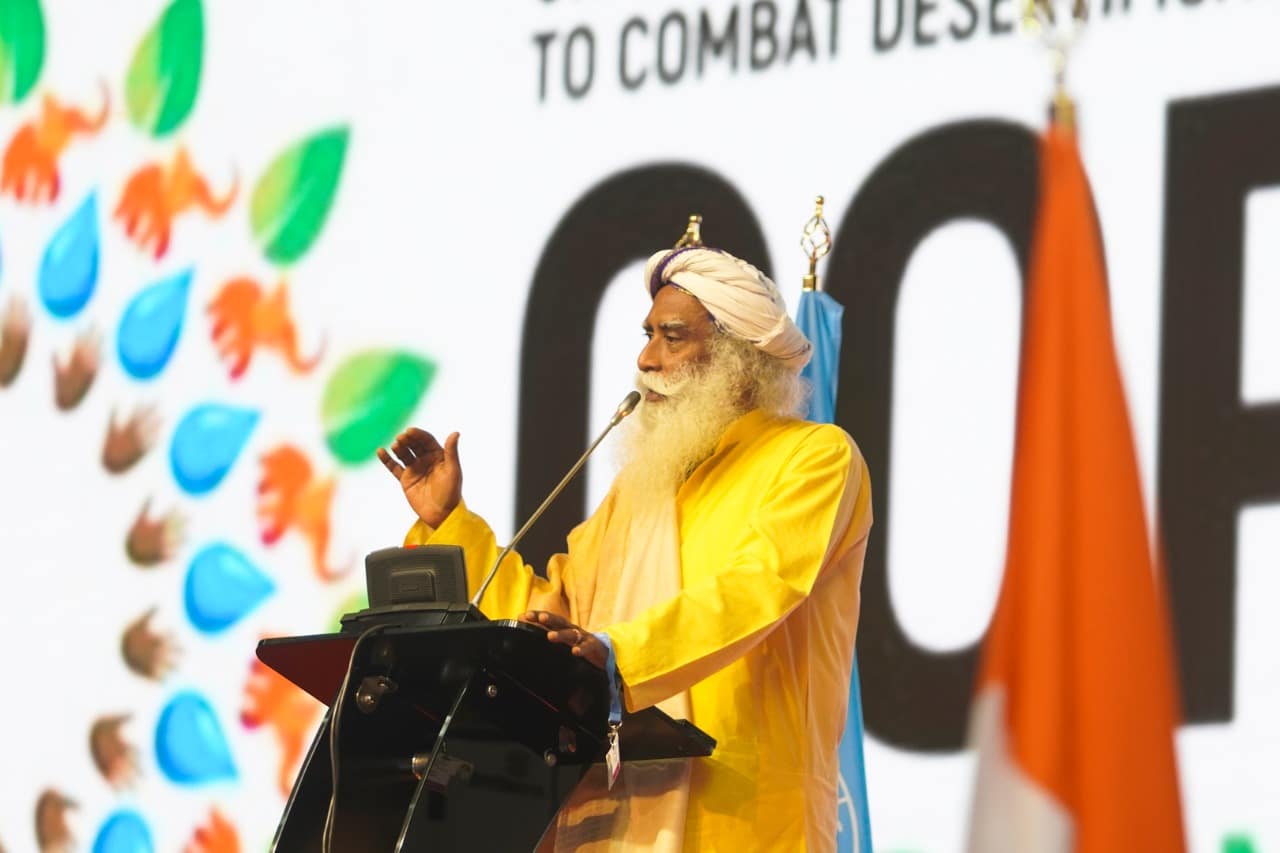 In 1987, the world’s leaders came together and agreed to phase out the use of ozone-depleting chemicals.

The resulting Montreal Protocol has been hailed as the “world’s most successful environmental protection agreement,” and yogi, mystic, visionary and soil activist Sadhguru knows why: It was able to unite the world around a single goal.

“I think a time has come where that kind of action is needed for soil,” he said at the  15th session of the Conference of Parties (COP15) to the United Nations Convention to Combat Desertification (UNCCD) in Cote d’Ivoire on Tuesday.

Sadhguru is a spiritual leader who has spent the last 24 years leading a global people’s movement to save the world’s soil. His Conscious Planet: Save Soil movement aims to turn the world’s attention to soil; encourage around 3.5 billion people, or 60 percent of the global electorate, to push for soil-healthy policies; and ensure that soil has an organic content of three to six percent.

“If you add organic content to sand, sand will turn into soil,” Sadhguru said in a video explaining his movement. “If you remove all organic content from the soil, soil will become sand.”

The minimum organic content for agricultural soil should be between three and six percent, but that is not currently the case. Soil in Southern Europe has 1.1 percent organic content, U.S. soil has 1.25 to 1.4 percent, Indian soil has 0.68 percent and African soil has on average 0.3 percent, Sadhguru said at COP15.

“If you look at this across the world, not a single nation has a minimum of three percent, not even a single nation. So why can’t we set this objective?” he asked.

Sadhguru outlined a three-pronged plan for restoring the organic content of soil:

“These agricultural products of fruit and vegetable and grain should find a different shelf in the marketplace,” he said.

Sadhguru’s remarks come at a crucial time for the world’s lands. A major UN report released ahead of UNCCD’s COP15 found that more than 70 percent of the Earth’s land has been altered by human activities and as much as 40 percent of it is degraded. Fifty-two percent of agricultural soils are also degraded, according to Conscious Planet: Save Soil, and scientists have warned that we only have 40 to 50 years worth of agricultural soil remaining. Each year, 27,000 species of soil organisms are going extinct, Sadhguru said during his talk, which means that in 30 to 35 years, we will reach a “point of no return” for soil.

“But right now we have this challenge, and also a privilege, that we are that generation,” Sadhguru said as he addressed UNCCD’s COP15. “If we act now, we can be that generation, we turn back from the brink of a disaster.”