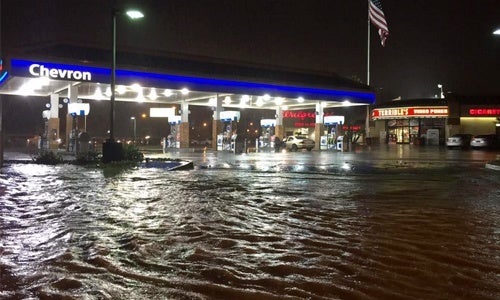 As South Carolina faces the aftermath of its historic flooding, Las Vegas, Nevada got rocked by its own intense flooding. “Strong thunderstorms with high rainfall rates moved through Las Vegas on Monday evening, causing flash flooding in the Valley,” says the Washington Post. “Roads and parking garages were swiftly filled with rushing water as the storms passed over.”

Vegas Parking Garage Turns into a RiverDON’T BET ON A DRY DAY IN VEGAS! This isn’t a river….it’s a parking garage! The garage, located on The Strip, between Harrah’s and The Venetian! AMHQ with Sam Champion

Posted by AMHQ with Sam Champion on Tuesday, October 6, 2015

“Throughout the day, it’s been pretty much bananas,” Las Vegas Fire and Rescue Battalion Chief Jon Stevenson told Las Vegas Now. “We’ve had swift water rescues; obviously the traffic accidents that take place because people have a tough time driving on wet roads; but in addition to that, we run the regular medical calls, and that, by itself, can keep us busy. Add to the fact that we’ve had these smoke and odor investigations; some of them might have been caused by lightning strikes, but that will be determined at a later date. That’s just a really common phenomenon.”

Lightning, hail and heavy rain were reported throughout the day in the Las Vegas Valley and surrounding areas, according to the Las Vegas Sun. The downpour brought 0.62 inches of rain on Monday (measured at McCarran International Airport), beating the previous record of 0.31 inch in a 24-hour period set in 2006, according to the National Weather Service. Though this is far less than the more than two feet of rain that has submerged parts of South Carolina, Las Vegas often doesn’t even see that much rain in an entire month, so the rainfall is very significant for the area.

Meanwhile, the death toll from the flooding in South Carolina rose to 15 on Tuesday, according to Reuters, as more than two feet of rain has inundated parts of the state since Friday. “Residents braced for more evacuations in areas near dams and swollen waterways across the state,” says Reuters.

So far, 11 dams have failed and 300 state-maintained roads and 160 bridges remain closed.

Though the floodwaters have begun to recede in places, officials have warned residents to be careful. “We are still in the mode that the next 36 to 48 hours will be volatile,” Gov. Haley told a news conference. “Don’t let the sunshine fool you.”

The state is now bracing for a second round of flooding as rivers crest above flood stage, and about 1,000 residents were told to evacuate this morning near the compromised Beaver Dam.