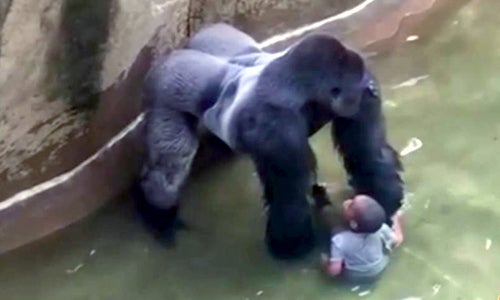 Officials at the Cincinnati Zoo shot and killed a rare gorilla Saturday after a four-year-old boy slipped into its enclosure.

The zoo said the situation was “life-threatening” so it took action and shot the 400lb gorilla.

“Tranquilizers do not take effect for several minutes, and the child was in imminent danger,” Thane Maynard, director of the Cincinnati Zoo & Botanical Garden, said in a statement.

“On top of that, the impact from the dart could agitate the animal and cause the situation to get much worse. We are heartbroken about losing Harambe, but a child’s life was in danger and a quick decision had to be made.”

Footage shot by a witness shows Harambe, the 17-year-old male gorilla, standing near the boy, who went under a rail, through wires and over a moat wall to get into the enclosure, according to the zoo. The footage later shows Harambe dragging the child through the water as the clamor of the crowd grows louder and increasingly panicked.

Zookeepers then shot the 450-pound western lowland gorilla with a rifle, rather than tranquilizing him.

The boy, who has not been identified, was taken to Children’s Hospital and released later Saturday evening.

“We are so thankful to the Lord that our child is safe,” the family of the boy said in a statement. “He is home and doing just fine. We extend our heartfelt thanks for the quick action by the Cincinnati Zoo staff. We know that this was a very difficult decision for them, and that they are grieving the loss of their gorilla. We hope that you will respect our privacy at this time.”

The shooting and killing of the gorilla has sparked outrage on the Internet as many are questioning the zookeeper’s decision to shoot the animal. According to the zoo, western lowland gorillas are critically endangered in the wild, numbering fewer than 175,000 with an additional 765 gorillas in zoos worldwide.

PETA, with this tragedy in mind, is encouraging people to choose cruelty-free entertainment. They suggest people take a hike in the woods and watch wildlife in their natural habitat.