Scott Pruitt Has Betrayed the Mission, the National Interest and the Public Trust 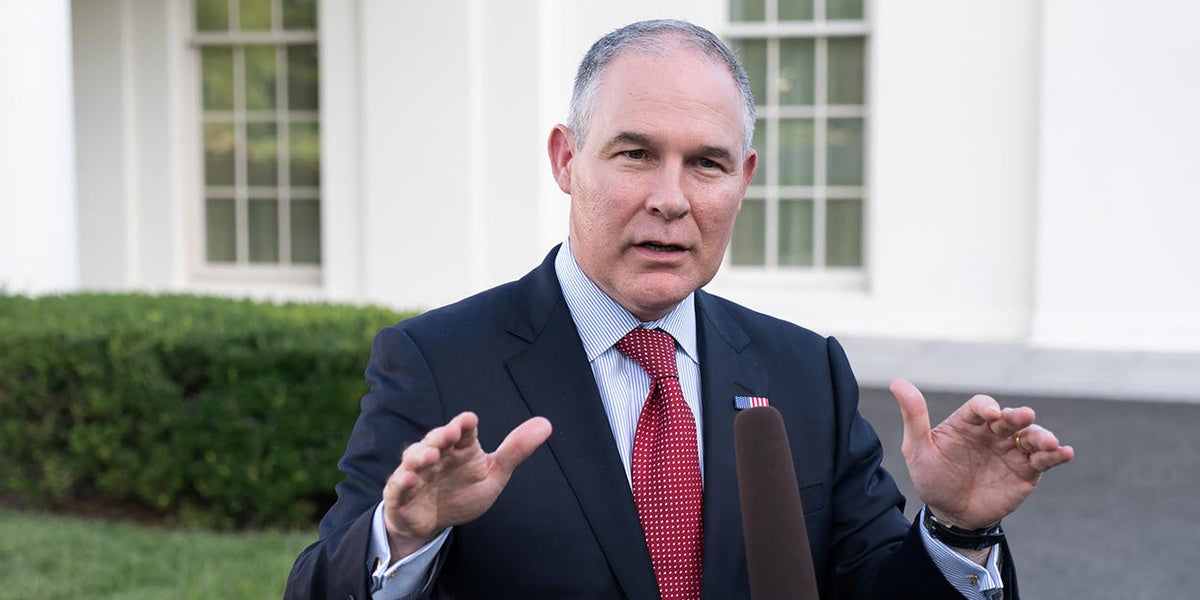 As Americans, we have a right to expect that the people we entrust with public service will work toward good governance, put the national interest first, advance the mission they’re given, and do so with integrity.

Scott Pruitt has betrayed that solemn trust on every count. He’s shredding public confidence in our government with every moment he remains in office. It’s time for him to go.

As administrator of the U.S. Environmental Protection Agency (EPA), Pruitt has a single overriding responsibility: to protect the environment and public health. Instead, he’s protecting big polluters as he moves to delay or weaken needed safeguards at the direct behest of one industrial lobbyist after another.

As a senior official in the executive branch, he has an obligation to work on behalf of the people. Instead, he’s setting the public interest aside, putting special interests first, and making the public pay the price.

And in his role overseeing the work of some 15,000 professional staffers, he has a duty to set an example of good judgment and ethical conduct. Instead, he’s become the administration’s poster boy for repeated lapses in both.

There’s his sweetheart condo deal with the wife of a fossil fuel lobbyist. And his insistence on flying first class when the taxpayers are buying the ticket, citing security concerns that somehow vanish when Pruitt pays the fare for personal flights home to Oklahoma. On Tuesday we learned that an inquiry by the EPA’s own Homeland Security office could find no evidence of any security threat that might justify the estimated $3 million in taxpayer money spent so far on Pruitt’s security detail.

Small wonder he’s become a late-night punchline. There’s nothing funny, though, about the damage he’s trying to do to the EPA and its capacity to protect the public from the real threats of toxic pollution and industrial ruin.

Pruitt’s greatest affront to the country is his single-minded effort to weaken, delay or do away with the EPA standards and rules that defend our air and water, protect us from toxic pesticides and chemicals, and enable us to fight the growing dangers of climate change.

Those commonsense safeguards are grounded in sound science, the public interest, and the rule of law, as Pruitt is finding out in our courts. That hasn’t stopped him from trying to gut those protections, and this is more than reason enough to fire him.

The way Pruitt conducts himself in office, though, warrants termination on ethical grounds. On Monday evidence emerged that Pruitt can’t be taken at his word, when two EPA staffers told The Atlantic of an email showing that Pruitt personally authorized a $56,765 raise for a favored aide after the White House rejected the increase as inappropriate. Pruitt last week blamed the incident on “my staff,” claimed he did not know who was responsible, and told Fox News that “the officials that were involved in that process should not have done what they did.”

In response to the contradictory email, EPA chief of staff Ryan Jackson put out a carefully worded statement, saying “Administrator Pruitt had zero knowledge of the amount of the raises, nor the process by which they transpired. These kind of personnel actions are handled by EPA’s HR officials, Presidential Personnel Office and me.”

The issue here, of course, isn’t process. It’s integrity. We’re being asked to imagine Pruitt was somehow unaware that one of his closest aides was getting a ludicrous raise over White House objections. Even in Washington, that’s not how it works.

The email controversy broke just hours after it was reported that the senior ethics official in the U.S. government―appointed by President Trump―had sent a scathing letter to his EPA counterpart, demanding to know whether Pruitt’s long trail of ethical controversies had compromised his ability to serve with “impartiality” and whether Pruitt “is using his public office for private gain.”

In the letter, David J. Apol, acting director and general counsel of the U.S. Office of Government Ethics, cited what he called “extremely concerning reports” that at least five EPA staffers who objected to Pruitt’s imperious requests for lavish spending and special privilege were later demoted or reassigned or sought different jobs.

EPA deputy chief of staff Kevin Chmielewski was placed on leave without pay for pushing back on Pruitt’s requests for spending on things like a $100,000-a-month fee to share a private jet or $70,000 for office furniture, including a bulletproof desk for the armed security agent stationed at all times within Pruitt’s office suite.

Eric Weese was demoted from his position as head of Pruitt’s security detail after refusing Pruitt’s demand that he turn on emergency lights and a siren on a government-owned SUV to whisk the administrator to the airport and to dinner at his favorite French restaurant.

“If true,” wrote the ethics chief, “it is hard to imagine any action that could more effectively undermine an agency’s integrity than punishing or marginalizing employees who strive to ensure compliance with the laws and regulations that safeguard that integrity.”

For Pruitt, destroying the integrity of the EPA has been job one since day one.

Pruitt came to office with zero credibility as an environmental advocate. Indeed, he built a career taking the EPA to court in an effort to hobble the agency on behalf of oil, gas, and coal companies. Now he’s an embarrassment―if not to Trump, then to the entire country.

In his letter, Apol may have put it best. “The success of our Government,” he wrote, “depends on maintaining the trust of the people we serve.”

Scott Pruitt has betrayed that trust. He cannot earn it back. It’s time we bought him one last ticket home to Oklahoma―in coach.