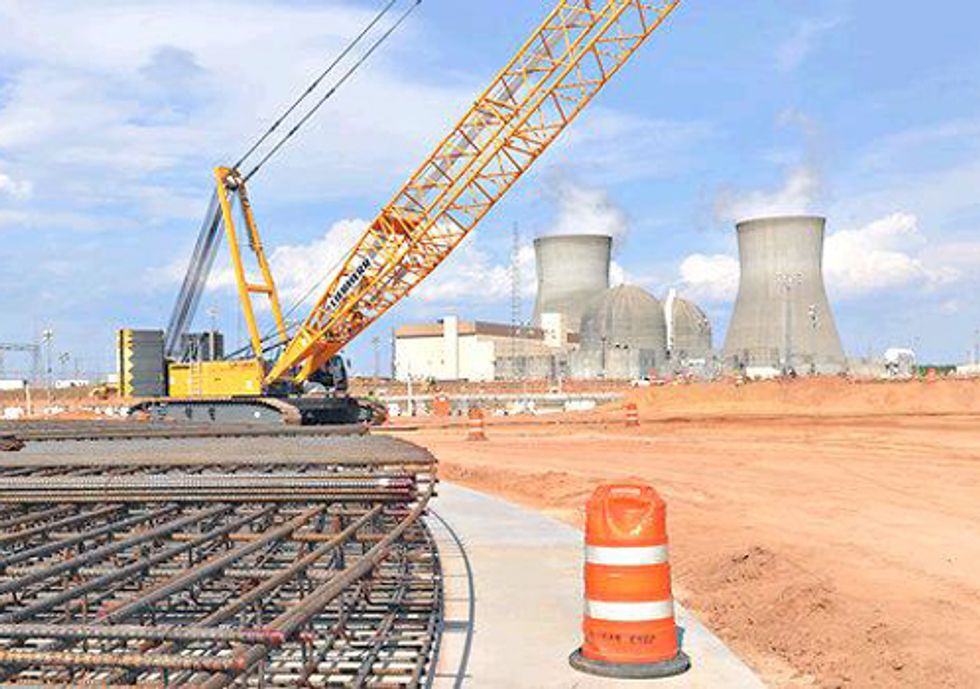 Will you pay for it? The future of new atomic power in the U.S. hangs in the balance.

A national grassroots campaign is now working to stop tax/ratepayer handouts and kill the project.

Construction there is defined by faulty concrete and non-spec rebar steel that threaten public safety and could delay completion dates beyond those projected even before construction began.

South Carolina's V.C. Summer, the only other new U.S. reactor project now under construction, is meeting fierce ratepayer resistance in two states. From Iowa to Brazil, Japan to France, the global reactor industry is collapsing in tandem. But what other nations will it bankrupt and irradiate before it's finished?

President Obama has tagged $8.33 billion in loan guarantees for Vogtle's construction. And Georgia ratepayers are being forced to pay for it in advance.

But the Office of Management and Budget is still dickering over terms with the Southern Company. Vogtle's prime builders want to put up little or no money. They want interest rates lower than what you would pay to buy a new house. They expect you to take primary liability for future disasters. They can't say what will happen to the radioactive waste.

The real price tags for both Vogtle and Summer are suspect. Original estimates have been as low as $2 to $4 billion per reactor. But Florida's Progress Energy has just admitted its proposed reactors for Levy County, near Tampa, would go as high as $9.5 to $12 billion each.

Given their delays and structural defects, there's no reason to believe Vogtle or Summer could come in cheaper. At those prices, they cannot begin to compete with new renewables or efficiency.

So where does that leave Vogtle's federal loan guarantees? George W. Bush set aside $18.5 billion at the Department of Energy for new reactor funding, but made no grants. Despite fierce lobbying, industry attempts to add to the fund have been defeated by national grassroots campaigns.

Obama designated the first $8.33 for Vogtle in 2010. But closed-door negotiations between his OMB, the DOE and Southern have been inconclusive.

The $535 million failure of Solyndra Solar loans has cast a shadow over the entire federal guarantee system. The proposed Vogtle guarantee is 15 times bigger. At least three national petitions are circulating to kill it.

Southern has hinted it might seek better terms from private lenders. But Wall Street has long scorned atomic investments. And Georgia ratepayers are already being soaked for hundreds of millions to pay in advance for reactors sinking in debt and increasingly unlikely to ever operate. In both South and North Carolina, ratepayers are revolting against skyrocketing rate hikes to build Summer.

In a major defeat for the nuclear industry, the Iowa legislature adjourned without voting advance rate hikes to build nukes there. Similar legislation is stalled in Missouri and under attack in Florida. Brazil has announced it will build no more reactors. Despite fierce federal attempts to reopen them, all Japan's commercial reactors remain shut.

New President Francois Hollande has pledged to phase down France's dependency on atomic power. A construction project at Flamanville (like one in Finland) is sinking in devastating overruns and delays. Whether Hollande will proceed there or at any other remains to be seen.

But France's new nuclear hesitancy may kill new reactor projects in Great Britain. They have been posited on support from Electricite de France, now under attack from Hollande and a skeptical banking system being hammered by Europe's financial crisis.

In India, many of the 350-plus women committed to a fast-unto-death against the Koodankulam reactors have entered critical life-threatening stages. Police-state tactics have escalated the mass confrontation at the site.

Only China still seems a hold out for large-scale new construction. As grassroots anti-nuclear campaigns there begin, the central government has not yet announced its post-Fukushima decision on whether to proceed with some 30-plus proposed new reactors.

But at Fukushima itself, we still face a potentially catastrophic situation at Unit Four's spent fuel pool, still perched 100 feet in the air. Tons of horrifically radioactive rods remain at the mercy of an earthquake that could send them crashing to the ground, spewing releases that can only be termed "apocalyptic."

In California, a failed $960 million "upgrade" at California's San Onofre has led to steam generator tube failures shutting two reactors with no firm reopening date. More than a $1 billion spent by Progress Energy at Florida's Crystal River may also doom it to long overdue burial.

So far there have been no balanced national hearings on the future of Votle's loan guarantees, or continued construction at Summer. But this latest $900 million price jump casts yet another deadly shadow over America's nuclear future.

It's time to kill this loan—and this industry—and put our money into green-powering our planet.

Our economic and ecological survival depend on it.