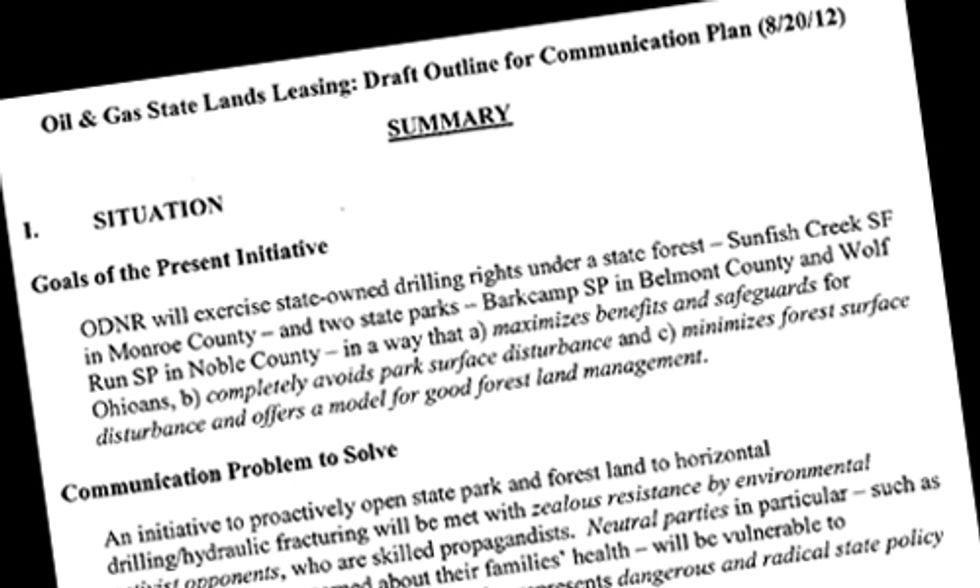 Public documents reveal a plan by the Ohio Department of Natural Resources (ODNR), the agency responsible for regulating fracking in Ohio, to work with "allied" groups to promote the controversial drilling technique in state parks. The "allied" groups named were both fracking industry and state regulatory bodies alike, drawing new criticisms to what many people have been calling Gov. Kasich's agenda to have his own way with the state's public funds and resources.

The document, Oil & Gas State Lands Leasing: Draft Outline for Communication Plan, was uncovered by Program Coordinator for the Ohio Chapter of the Sierra Club Brian Kunkemoeller after making a public records request. It outlines a PR initiative from August 2012 to "encourage support" to stakeholders and the public for fracking in state parks and forests, and proactively counter "zealous resistance by environmental activist opponents, who are skilled propagandists."

After reading the 13-page document, Kunkemoeller was gravely concerned as the ODNR seemed to be acting like a marketing firm for the oil and gas industry instead of the agency charged with regulating oil-and-gas drilling in Ohio to protect human health and the environment.

"This is an unprecedented collusion between oil and gas companies and the agencies that regulate them. This isn't just bad news for our parks and forests, it's bad news for our democracy," said Kunkemoeller.

The document refers to stakeholders and key influencers, and refers to adversarial opinion leaders as "'eco-left' pressure groups" and goes on to say under the communications obstacles and constraints header, "opponents will attempt to create public panic about perceived health risks" and "opponents' proxies in the media will slant news coverage against us."

The third of three communication objectives in the document states, "Marginalize the effectiveness of communications by adversaries about the initiative."

The ODNR goes as far as saying in the PR document that "this initiative could blur public perception of ODNR’s regulatory role in oil and gas,” and will require “precise messaging and coordination” to eliminate confusion.

“Clearly we need answers to find out if the public trust has been compromised on behalf of big gas and oil," Rep. Antonio said upon a first look at the documents. "I take my responsibility to be a steward of Lake Erie and clean and safe parks very seriously. I am stunned to find that perhaps the fox is actually in the henhouse.”

The PR memo refers to allied parties as "supporters/participants of economic/oil & gas development in Ohio" and states it will "minimize impact of adversaries on neutral audiences (e.g., neutralize adversaries' public health risk claims)."

The document states that the ODNR would lead the efforts and coordinate with the governor's office, with JobsOhio focused on the job-creation angle.

According to the Columbus Dispatch, the PR plan was never officially implemented and Kasich spokesman Rob Nichols said that the governor’s office had never seen the plan.

Sources say, additional documents are to be released at a ProgressOhio press event on Monday revealing the Governor's involvement in the communications document and how Gov. Kasich's department conspired with industry on drilling in state parks.

A second press event will take place at the Ohio Statehouse on Tuesday where Representatives Hagan and Antonio will discuss how the Kasich administration’s cozy relationship with the oil and gas industry is putting corporate interests over the public concerns of safety and job opportunities with regard to fracking in state parks.

“As a state legislator, it is my duty to advocate for the safety and health of our constituents and to respond to their concerns by raising questions and demanding answers,” Rep. Hagan said.

“The oil and gas industry would love nothing more than to sweep those concerns under the rug, and it appears that they have enthusiastic partners in Governor Kasich and the ODNR.”