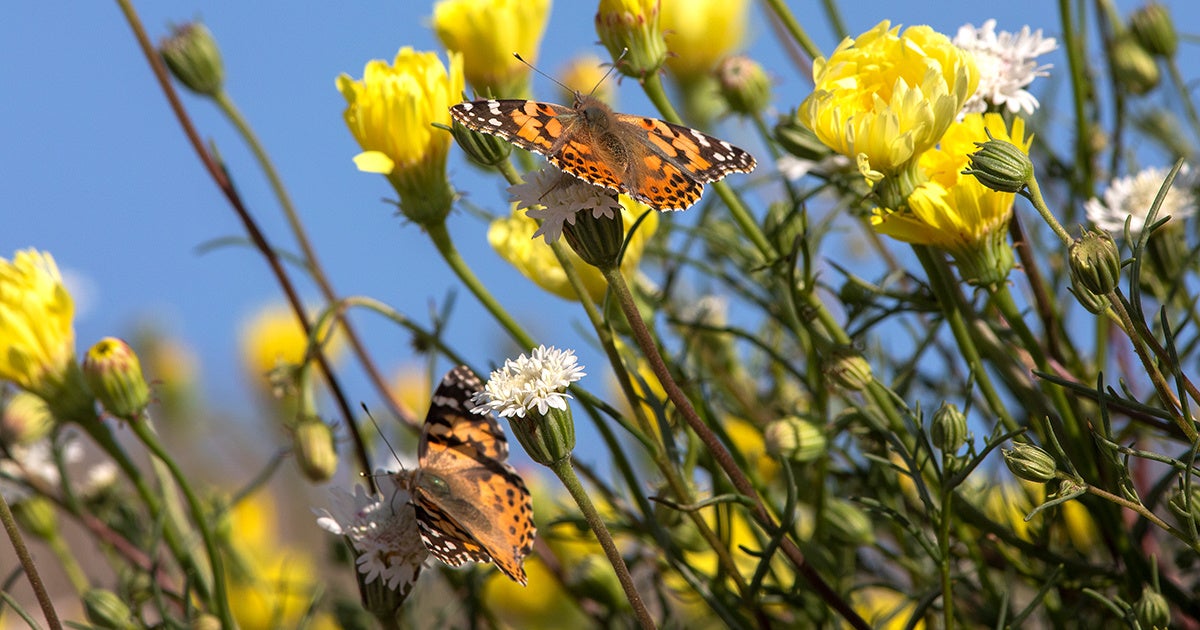 Southern California is in the midst of a “magical” surprise: unusually large swarms of Painted Lady butterflies filling the skies from San Diego to Pasadena.

“Everyone was posting about the butterflies all over Instagram,” a woman told CBS Los Angeles Tuesday. “I saw so many, it was kinda like a swarm of them. It was pretty insane.”

The butterflies are passing through as part of their yearly migration from the deserts of Southeast California to the Pacific Northwest, but this year they are doing so in numbers not seen since 2005, when they totaled around one billion.

“When they are scarce nobody notices them,” University of California (UC) Davis ecologist Art Shapiro told The Los Angeles Times. “When they are abundant, everyone notices.”

I’ve never seen so many Butterflies in my life! They keep coming and are all heading north. It’s absolutely stunning! #Butterflymigration pic.twitter.com/aiZQGJyCrS

Southern California friends: I just sat on the beach in the South Bay for two hours while 1,000s of butterflies flew around and past me. What kind are they? What is happening? #butterflies pic.twitter.com/n1IrEaBy0D

For Shapiro, who has been monitoring California’s butterflies for almost 50 years, it’s a welcome change. He only counted 25,200 Painted Ladies in 2018, down from 315,997 the year before, an alarming trend in a state that is seeing butterfly populations decline across the board.

But this year, that trend has reversed and then some.

“They were flying parallel to me, just bobbing along as I rode past the date palms,” The Living Desert Zoo and Gardens Conservation Director James Danoff-Burg told The Los Angeles Times. “It was absolutely magical. I felt like a Disney princess.”

The reason for the population’s explosion has been California’s unusually wet winter.

“The average annual rainfall in the Coachella Valley is 3 inches,” Danoff-Burg said. “This year, we had 3½ inches on Valentine’s Day alone.”

The rain led to a desert wildflower bloom, giving the caterpillars more to eat and a greater chance of surviving. Anza-Borrego Desert State Park, for example, has reported excellent wildflower viewing this year, NBC News reported.

However, the Painted Lady rebound doesn’t necessarily mean that other California butterflies will recover.

“They are a boom-bust species,” University of Nevada, Reno ecologist Matt Forister told The Los Angeles Times. “In some ways, they are the most successful butterflies on the planet.”

California’s overall butterfly population reached historic lows in 2018. A monarch butterfly count found numbers of the iconic species were down 85 percent compared to the year before, and Forister said at least 20 other species were declining even faster than the monarch.

Scientists think land use and farming changes that lead to less open space and fewer butterfly-friendly plants, an increased use of pesticides and climate change could all be contributing to a decrease in butterflies.

“There is not one cause for the butterfly decline — that’s not how population extinction happens,” Forister said. “It’s more likely a suite of factors that are pushing on all these species.”

Painted Ladies, though, are tough.

“They can pace cars at 25 miles per hour,” Shapiro told NBC News.