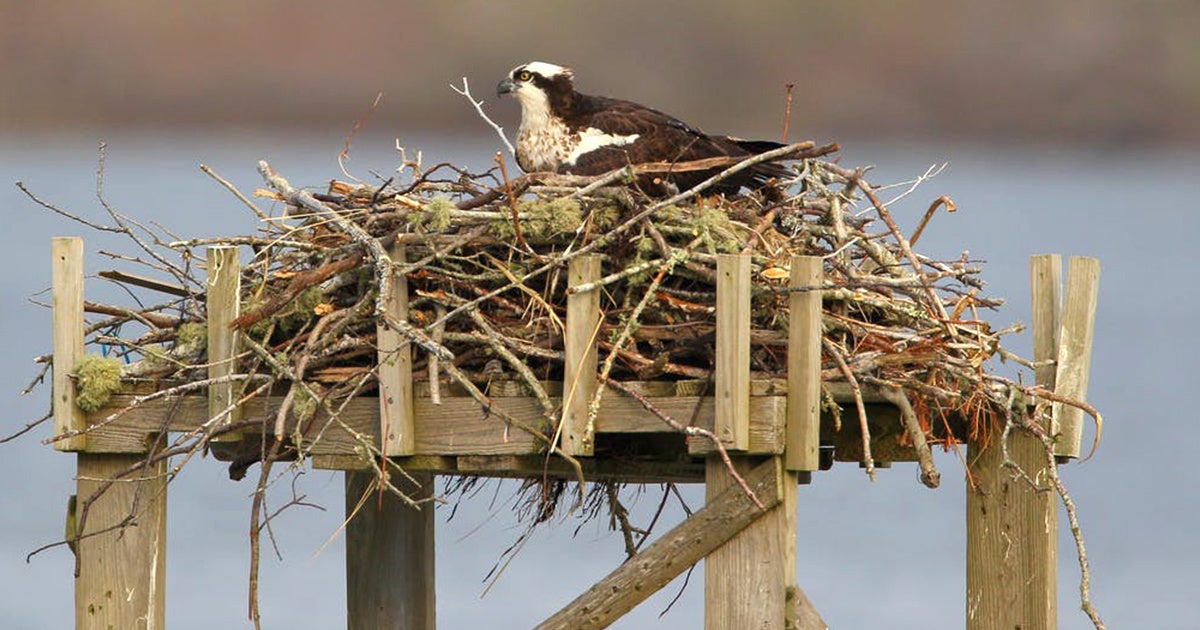 A hundred years ago, a person wandering the back roads of coastal New England might have come across an odd sight: at the edge of a farmyard, cheek by jowl with pigs and chickens and cows, a tall pole topped with a massive stick nest. And standing guard in the nest, a large brown-backed, white-headed wild bird of prey — an osprey (Pandion haliaetus).

Farmers in this region knew that nesting ospreys were vigilant watchdogs, quick to chase “chicken-hawks” and other predators away. But as fish eaters, ospreys were no threat to farm animals. And they were trusting enough to live comfortably near humans. So farmers lured them by building them places to nest — generally, an old wagon wheel atop a bare pole, mimicking the dead trees in which ospreys had nested for millennia.

Although these clever farmers didn’t know it, they were pioneering methods that would help to bring ospreys back from the edge of extinction decades later. As I recount in my new book, Ospreys: The Revival of a Global Raptor, these birds have made a spectacular recovery from chemical pollution, guns and traps, thanks to many dedicated conservationists and an amazing ability to thrive in close quarters with humans.

Gone in the Blink of an Eye

Up to 1950, ospreys were one of the most widespread and abundant hawks in North America. Few rivers, lakes or ocean shorelines lacked a nesting pair. In certain favorable spots, such as islands along the Atlantic coast, wooded swamps in Florida and western states, and shallow-water lagoons bordering the Gulf of Mexico and Baja California, hundreds of nests were often clustered together in just one or two square miles.

But the bottom dropped out after World War II. Insecticides developed for military use — particularly DDT — flooded onto the civilian market to control farm and forest pests and mosquitoes in towns and villages. These chemicals accumulated in food chains, so ospreys received large doses from the fish they consumed. In their bodies, DDT thinned their eggshells, causing a disastrous drop in the number of eggs that produced live chicks. In addition, other insecticides poisoned nestling and adult ospreys.

By the mid-1960s, the number of ospreys breeding along the Atlantic coast between New York City and Boston had fallen by 90 percent. And, as I document in my book, most other populations in the U.S. and Canada had declined by half to two-thirds. 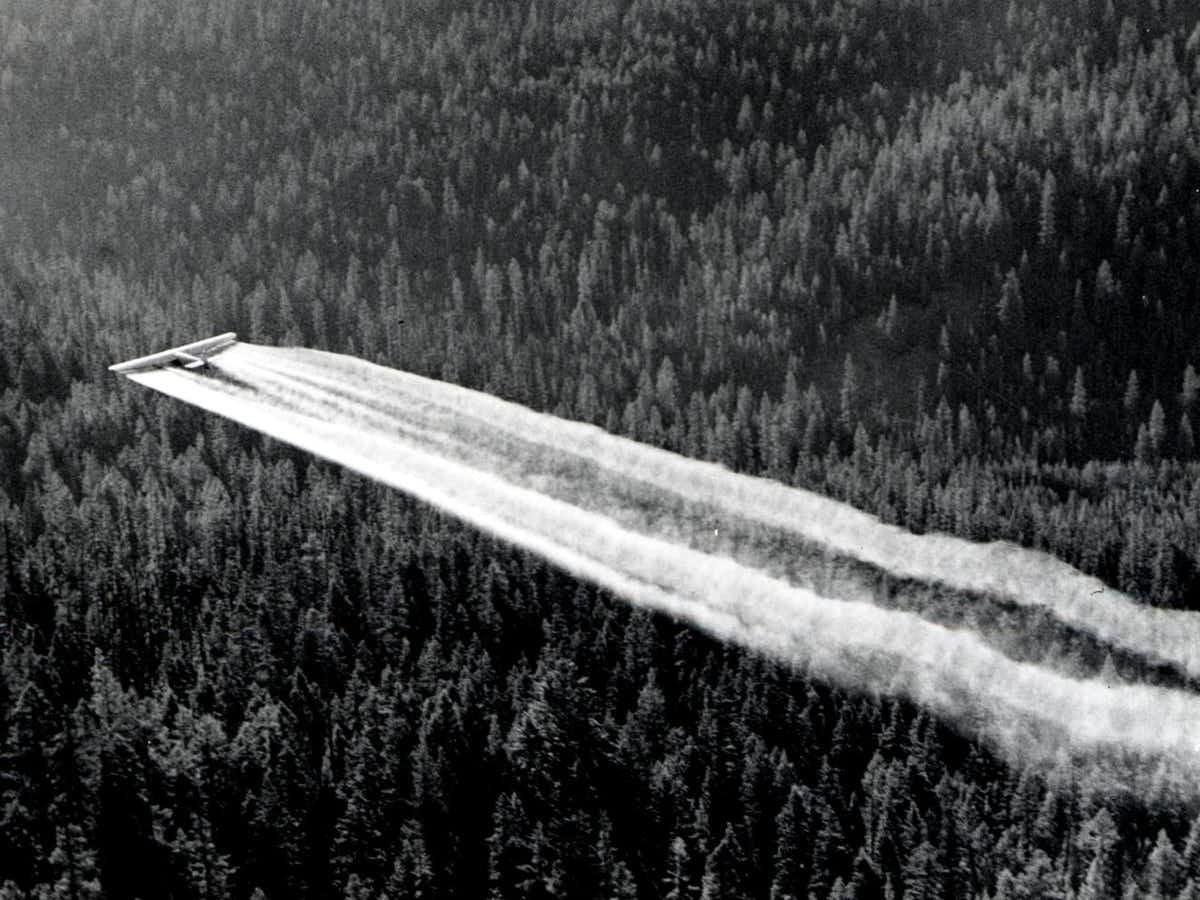 This was the era of Silent Spring, biologist Rachel Carson’s blockbuster exposé, which sounded one of the first alarms about the hidden environmental costs of pesticides.

Ospreys played a lead role in this drama. Their well-documented crash provided concrete data for court cases brought to block indiscriminate spraying. Sanity prevailed: The most lethal and persistent insecticides were banned by the 1970s, giving ospreys and other birds, including the Bald Eagle and Peregrine Falcon, a respite in the nick of time.

A Seismic Shift in Nesting Sites

But restoring robust numbers of ospreys to regions where most or all of the breeders were gone required more than just curbing the flow of environmental contaminants. Nest sites were increasingly scarce along shorelines as development consumed old pastoral landscapes. With fewer safe places to raise young, osprey recovery prospects appeared dim, no matter how clean the environment or how abundant local fish populations were.

But concerned naturalists took a cue from those old farmyard nest poles and began to erect new poles in the 1970s and ’80s, especially along the broad ribbon of salt marshes hugging the Atlantic seaboard. Ospreys adapted remarkably, zeroing in to nest on these poles, as well as on a kaleidoscope of other artificial sites springing up along U.S. coasts and rivers: power and lighting structures, channel markers and buoys, and more recently, even megatowers supporting cellphone and other electronic communications equipment. Other nesting birds of prey make occasional use of such sites, but ospreys have been the champion colonizers.

No one could have predicted such a dramatic shift a generation ago, or what a boost it would give to osprey numbers. Within just a few miles of where I live along the Massachusetts coast, more than 200 ospreys now nest each year, lured in by abundant nest poles we’ve built on wide-open marshes. Fewer than 20 ospreys were found here in the 1960s.

This is not an isolated phenomenon. Thousands of pole nests now dot the coastal landscape from Maine to Florida — testimony to persistent work by hundreds of dedicated people. In Florida, at least 1,000 pairs of ospreys have made cell towers their nesting homes. Along the shores of the Chesapeake Bay, nearly 20,000 ospreys now arrive to nest each spring — the largest concentration of breeding pairs in the world. Two-thirds of them nest on buoys and channel markers maintained by the U.S. Coast Guard, who have become de facto osprey guardians.

These new nests have powered quick growth in numbers, with more ospreys in the U.S. and Canada today than ever before. Many are colonizing new areas.

And this revival extends well beyond the Americas. Ospreys have a global reach, from Scotland to Japan and from the Mediterranean to Australia. Particularly in Europe, where most ospreys were eliminated by guns and traps rather than by insecticides, we are seeing extraordinary recoveries.

Traveling to Europe in the summer of 2016 to research my book, I discovered flourishing new osprey populations. Artificial nest sites — supports built mostly in trees to stabilize existing nests and encourage new ones — were plentiful and packed with young ospreys ready to fledge. In Germany, shallow wire baskets secured atop enormous power pylons provided foundations for hundreds of new nests that had taken hold in areas long-abandoned by ospreys.

Some researchers complain that providing these birds with nest sites is making them “prisoners of platforms” — creating artificial populations where none were meant to be. But rampant coastal development, plus industrial farming and forestry in surrounding regions, have badly degraded the landscapes in which ospreys once thrived. To have robust numbers of this species back again is a reward for all who value wild animals, and a reminder of how nature can rebound if we address the key threats.

Alan Poole is a research associate at Cornell University and the author of Ospreys: the Revival of a Global Raptor.
Disclosure statement: Johns Hopkins University Press provides funding as a member of The Conversation US.
Reposted with permission from our media associate The Conversation.