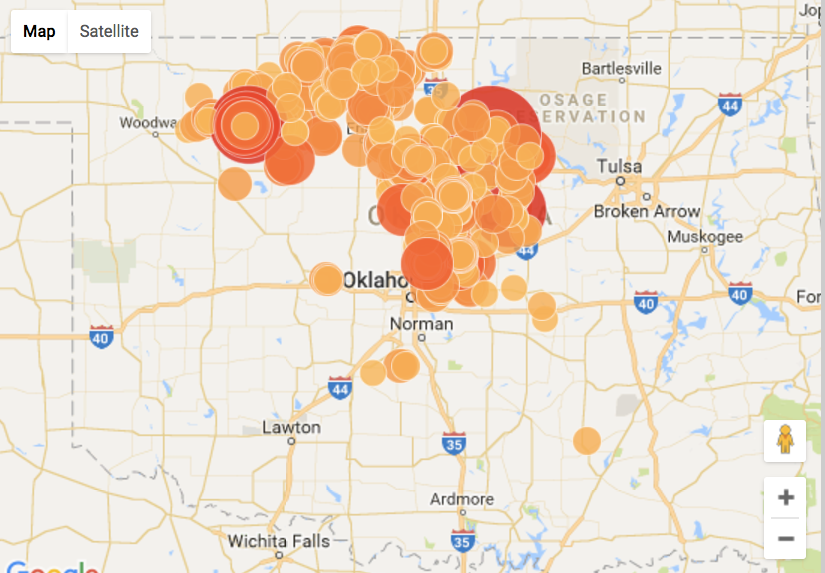 Despite a crackdown on wastewater injection volumes, Oklahoma has once again been named the state with the highest risk of human-induced earthquakes, according to new seismicity maps released Wednesday by the U.S. Geological Survey (USGS). 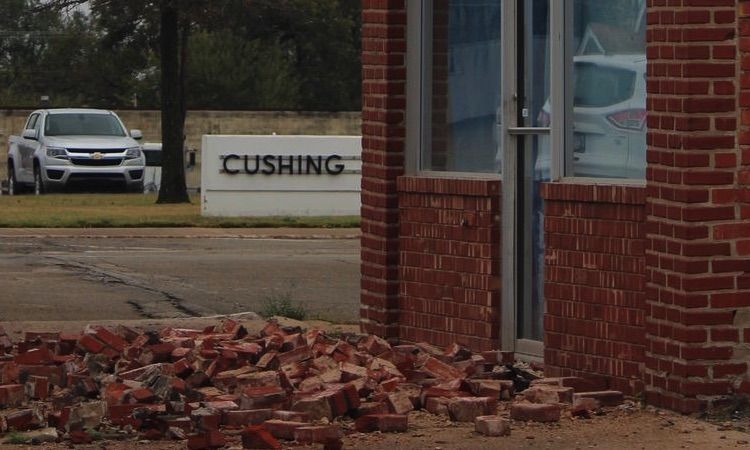 Damage to buildings in Cushing, Oklahoma from a 5.0-magnitude earthquake on November 6, 2016. Dolan Paris, USGS

Geologists believe that these man-made quakes are triggered by wastewater from oil and gas operations being injected into deep underground wells. These fluids can cause pressure changes to faults and makes them more likely to move.

This process has been blamed for the Sooner State’s alarming rise in seismic activity. Between 1980 and 2000, Oklahoma averaged only two earthquakes greater than or equal to magnitude 2.7—the level at which ground shaking can be felt—per year.

The USGS said that the decline in 2016 quakes could be due to injection restrictions implemented by the state officials. According to Bloomberg, “State regulators aiming to curb the tremors have imposed new production rules cutting disposal volumes by about 800,000 barrels a day and limiting potential for future disposal by 2 million barrels a day.”

Some of the biggest quakes include a 5.0-magnitude temblor that struck Cushing, one of the largest oil hubs in the world, on Nov. 6. And the largest quake ever recorded in the state was a 5.8 that hit near Pawnee on Sept. 3.

Even with a decrease in wastewater injection volumes, the USGS determined that the 3.5 million people who live and work in areas of the central and eastern U.S. (CEUS) face significant potential for damaging shaking from induced seismicity in 2017. The majority of this population live in Oklahoma and southern Kansas.

Remarkably, man-made temblors have put this area’s earthquake risk on par with another notoriously earthquake-prone state.

“The forecasted chance of damaging ground shaking in central Oklahoma is similar to that of natural earthquakes in high-hazard areas of California,” the USGS said.

The researchers also found that an additional half million people in the CEUS face a significant chance of damage from natural earthquakes in 2017, bringing the total number of people at high risk from both natural and human-induced earthquakes to about four million.

“The good news is that the overall seismic hazard for this year is lower than in the 2016 forecast, but despite this decrease, there is still a significant likelihood for damaging ground shaking in the CEUS in the year ahead,” said Mark Petersen, chief of the USGS National Seismic Hazard Mapping Project, in a statement.

“The forecast for induced and natural earthquakes in 2017 is hundreds of times higher than before induced seismicity rates rapidly increased around 2008,” said Petersen. “Millions still face a significant chance of experiencing damaging earthquakes, and this could increase or decrease with industry practices, which are difficult to anticipate.”

The USGS also identified the Colorado/New Mexico area known as the Raton Basin as another high hazard area in 2017.

“Most of the damage we forecast will be cracking of plaster or unreinforced masonry. However, stronger ground shaking could also occur in some areas, which could cause more significant damage,” Petersen said. 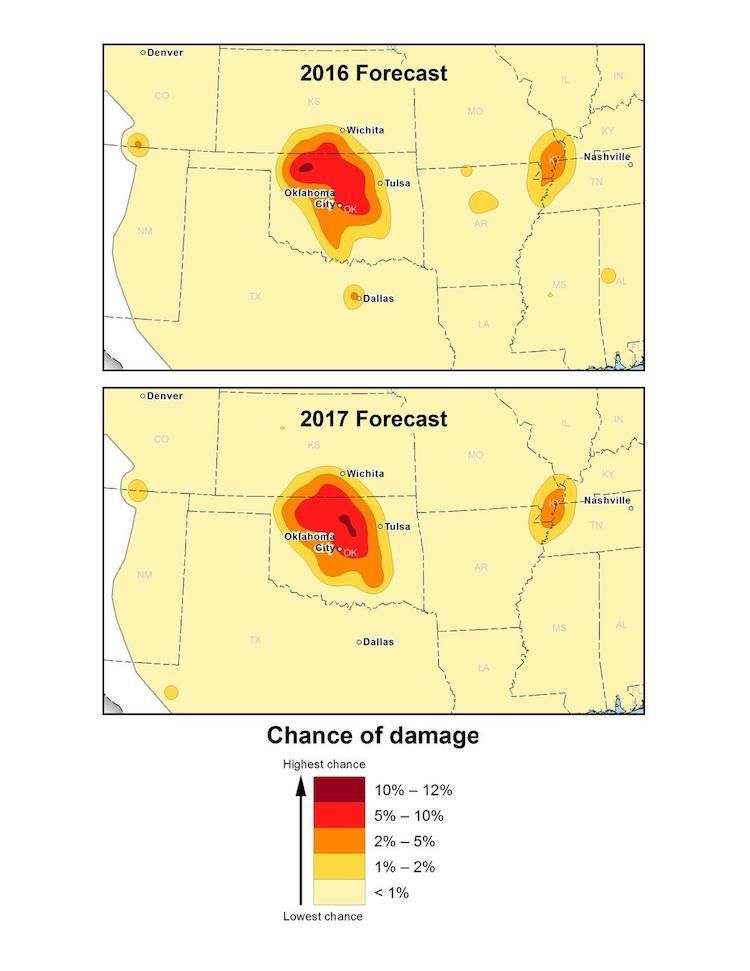 In a statement published in the Los Angeles Times, Oklahoma Geological Survey’s director Jeremy Boak said that both regulatory actions as well as falling petroleum prices “should result in further declines in the seismicity rate and limit future widespread seismic activity.”

The Oklahoma Corporation Commission, which regulates oil and gas wells in the state, credited disposal rules for the drop in quakes, telling Bloomberg that it “serves to confirm the validity of the work done in Oklahoma to reduce earthquake risk, as well as the need for the effort to continue.”

Katie Brown, a spokeswoman with a research and education program of the Independent Petroleum Association of America, told the Los Angeles Times that the reduced number of earthquakes “is a clear sign that the collaborative efforts between industry, scientists and regulators are working.”