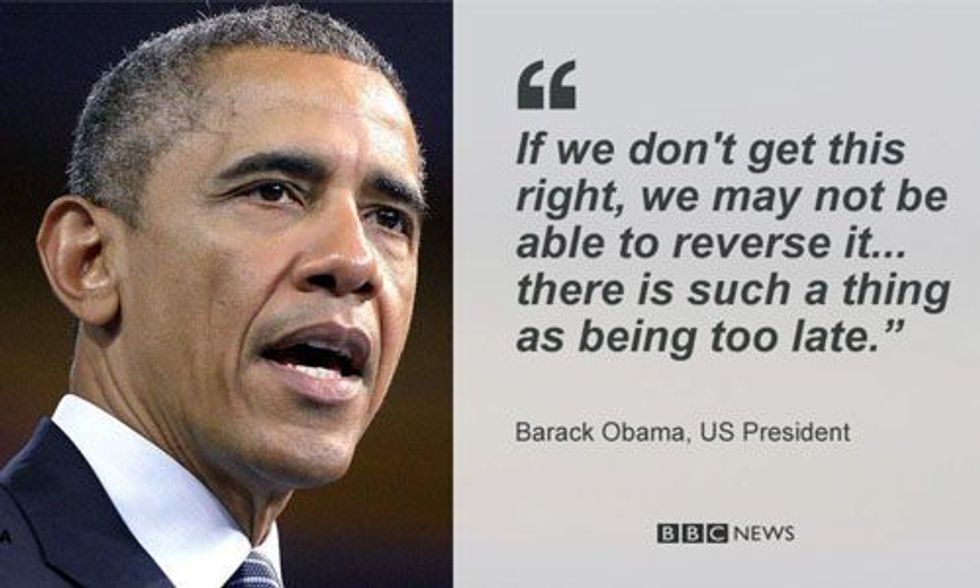 President Obama’s determination to reduce U.S. carbon emissions by 32 percent below 2005 levels by 2030 sends a message to the rest of the world’s leaders that the UN climate talks in Paris could succeed in saving the planet from overheating.

Past talks have foundered on a range of political excuses, but now that the world’s two largest polluters, China and the U.S., have committed to far-reaching changes in their energy production to keep the world below the dangerous threshold of a 2°C temperature increase, the door is open for all the rest to follow.

The stumbling block to U.S. action so far has been the refusal of die-hard members of the Republican Party to accept that climate change is happening and the well-funded fossil fuel lobby’s legal and political campaign to block any legislation.

But President Obama’s use of an existing law—the Clean Air Act of 1970—has allowed him to bypass Republican opposition simply by issuing new regulations.

The law says that the U.S. Environmental Protection Agency must regulate any pollutant that is deemed a danger to human health and wellbeing. And the Supreme Court upheld the agency’s finding that carbon dioxide in large amounts did qualify as a dangerous pollutant.

The fact that President Obama’s regulations are backed by a number of power companies that see the regulations as an opportunity to invest in renewables and by corporate giants such as Coca-Cola, Walmart and Google, shows there is increasing support for him across America.

Of course, the Republicans will continue to challenge the new regulations in the courts and they will be an issue in the next presidential elections. Democratic front-runner Hillary Clinton has already endorsed the Obama proposals.

The Republican opponents who say it will cost jobs in the coal industry will also have to explain whether they are in favour of the asthma, the premature deaths and the danger to the planet that coal plants cause.

The U.S. political battle will come to a head long after the Paris talks have succeeded or failed. At the moment, the policy of both the U.S. and China is far more forward-thinking and their actions more far-reaching than even the optimistic could have hoped for two years ago.

China has been under huge pressure from its increasing middle class to take action on air pollution and so phasing out dirty coal power plants has become a national priority.

This will take a long time because the plants are so numerous and China needs more power, but a start has already been made and the country has a massive renewable energy program, where it is already the world leader.

In the World Resources Institute list of the top 10 polluter countries, the European Union's (EU) 28 member states—ranked third behind China and the U.S.—are classed together, since the EU has a joint reduction target.

However, this masks massive differences in government approaches. For example, Germany is going for renewables in a big way and is phasing out nuclear power, while the UK is intent on building nuclear and is no longer encouraging on-shore wind and solar energy.

Further down the list are India in fourth place, Russia fifth, Japan sixth and then Brazil, Indonesia, Mexico and Iran.

India is still trying to provide its vast population with access to regular electricity supplies, or in some cases any electricity at all, so its priority is still development, rather than curbing pollution.

That said, the Indian government, like China’s, is under heavy pressure because of the killer smogs that regularly envelop its major cities. The government is currently investing heavily in solar power, along with coal plants. It remains to be seen whether its targets to make a contribution to reducing emissions will improve in Paris.

The remainder of the top 10 are more difficult to assess. Russia remains an unknown quantity, Japan is still struggling with the closure of its nuclear power plants following the Fukushima accident in 2011 and the others are, like India, dominated by concerns for development more than environment.

The Obama intervention, four months before the Paris talks, does demonstrate to every world leader that, in the world’s largest economy, the future is renewables and that no new coal-powered plants will be built. If this is the way forward for the richest nation, then the rest of the world should at least take note.

Canada and Australia, at 11 and 13 in the table of top carbon polluters, will come under pressure to at least accept some targets to cut greenhouse gas emissions. Both at the moment have ditched reduction targets in favour of exploiting fossil fuel resources.

Australia seems intent on denying climate change and providing the world with coal, but it may now find its exports suffering.

Obama’s announcement certainly tilts the balance towards a good outcome in Paris.

Michael Brune: The Power Is in the Plan