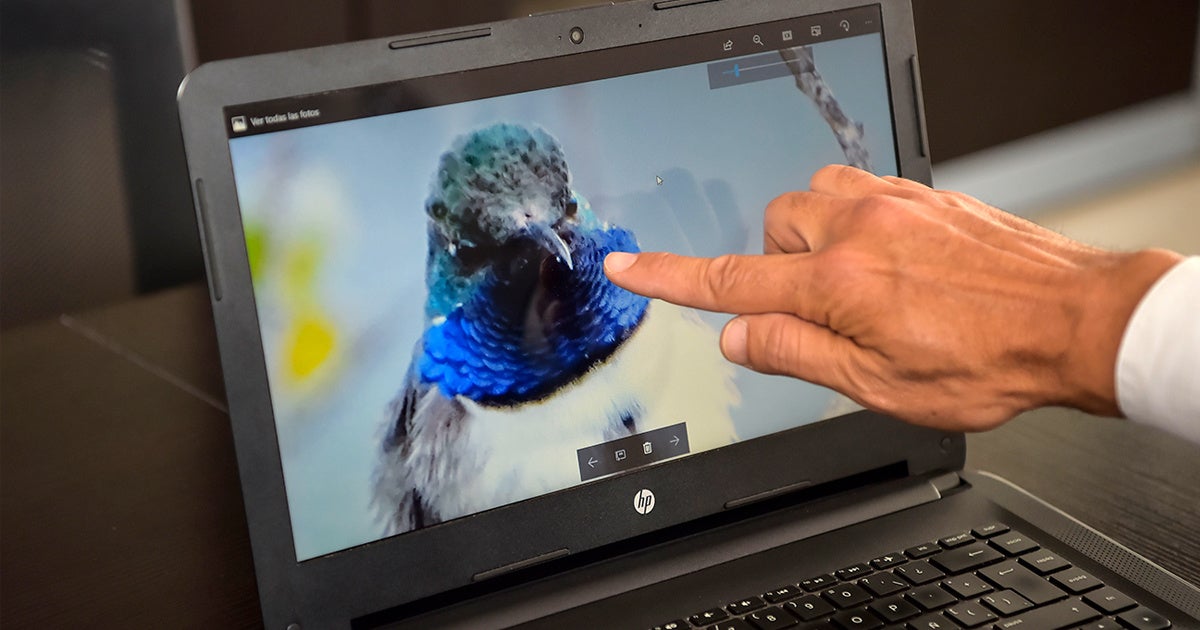 Somehow the striking blue-throated hillstar, a hummingbird with an emerald-feathered head and sapphire splash across its neck, managed to elude us for a very long time. Scientists just recently discovered Oreotrochilus cyanolaemus, describing the species for the first time in The Auk: Ornithological Advances.

Perhaps we humans didn’t notice the bird before because it’s tiny, at just four inches long. Or maybe it was because it lives high up in the Ecuadorian Andes, or because it hibernates long stretches of each day. Who am I kidding? Like many new (to us) species, only a handful of these hummingbirds are left. That’s likely the reason we missed it.

Population estimates for the blue-throated hillstar range between 500 and 750. Making matters worse, all of them live within a narrow band of just 38 square miles—none of which is protected and much of which lies within gold mining concessions.

“This is large-scale mining we are talking about,” said Elisa Bonaccorso, an evolutionary biologist at the University of San Francisco, Quito, in Ecuador, who worked on the study. When the steam shovels roll in, she says, we won’t be talking about a few holes here and there, but about widespread habitat destruction. That the mining wastes would then pollute the area’s soil and water would be “almost guaranteed.”

Huge mines also bring new roads and, according to another of the study’s authors, Juan Freile, operate without properly planning for how they might mitigate their impacts on the natural areas they carve through. While Ecuador’s Ministry of Environment oversees such operations, it rarely declines a new project, said Freile, an ornithologist with the Ecuadorian Committee of Ornithological Records, “even if they overlap with ecologically sensitive or biodiverse regions.”

But there’s an even more immediate threat to the blue-throats: fire.

The hummingbirds live on a treeless plateau, called a páramo, some 11,000 to 12,000 feet above sea level. Winds whip over this landscape, forcing the birds to spend most of their time taking shelter among the shrubs and flowering chuquiraga plants that line the plateau’s creek beds. People live up here, too—people with cattle and goats that they raise for milk, meat and wool. Unfortunately, burning the páramo from time to time to clear out old, dry grasses and spur the growth of young shoots that are more nutritious for livestock has become common practice. 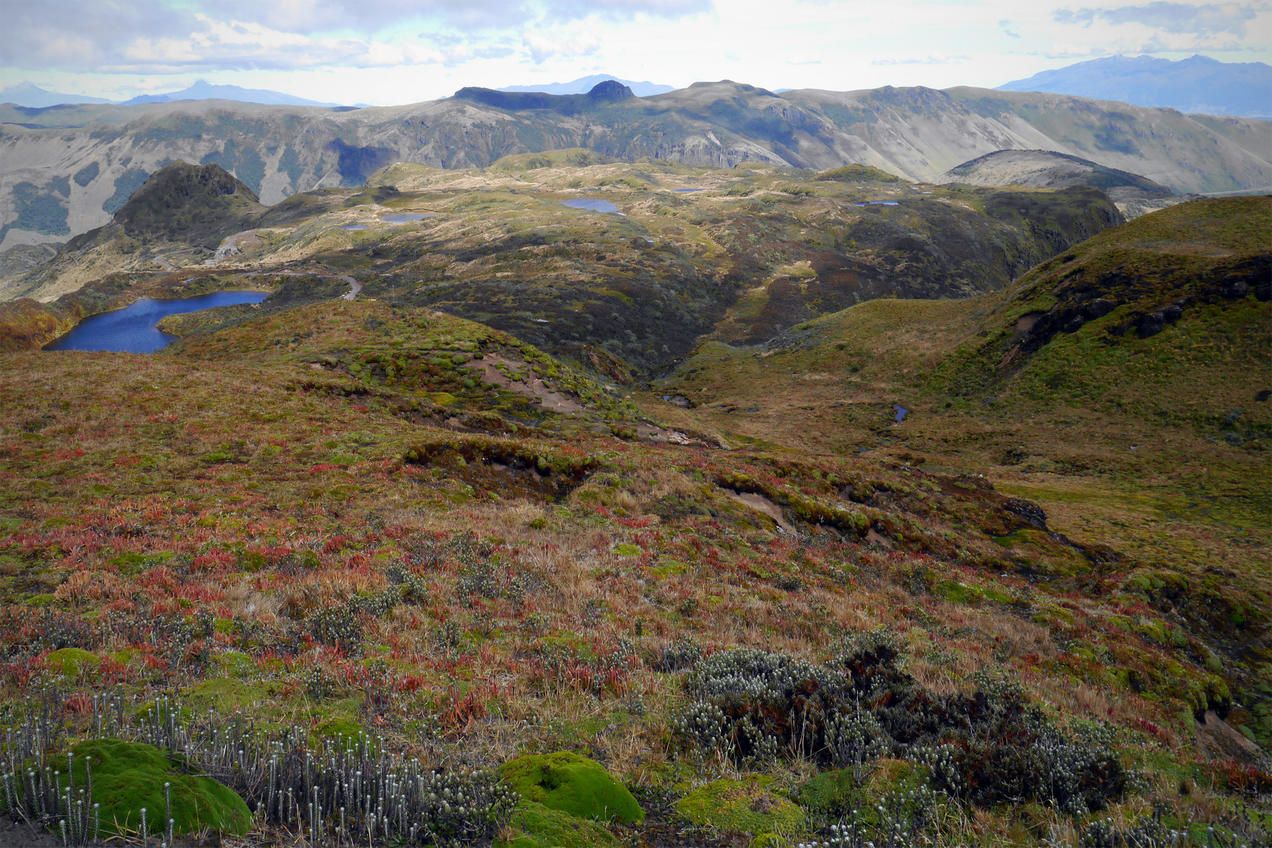 The landscape of the Ecuadorian Andes.jpc.raleigh / Flickr / CC BY-NC 2.0

“Páramos that have been burned recover very slowly and lose biodiversity,” said Freile. A smattering of grass species then takes over and the shrubs disappear.

Some farmers also clear the grasslands for fields of potatoes, onions, beans, and grains. About 15 to 20 years ago, when communities brought nonnative pines to the plateau to harvest pulp for paper, the pine plantations began pushing the páramo ecosystem farther and farther from its natural state.

Suffice it to say, the threats to the blue-throats are piling up—and it’s unclear whether the species will be able to handle them. Hummingbirds already push the limits of what’s possible in terms of energy in and energy out. They are flying acrobats that beat their wings so fast the human eye can’t see them, and their little hearts surpass 1,200 beats per minute. But they must replace the calories they burn, and rapidly, or risk death by exhaustion.

There isn’t much room for error in such an energy equation—and it becomes even more complicated at more than two miles above sea level. Here on Ecuador’s high plateaus, temperatures plummet to levels just above freezing each night. The blue-throated hillstars have evolved a work-around for this hostile environment.

For starters, they’re slightly bigger than the hummingbirds you might see at your backyard feeder. This helps them hold onto heat more easily, as do their denser, more insulated nests. The birds are also very frugal with the energy they spend. For instance, instead of hovering in midair like tiny avian helicopters, as do most hummingbirds, the blue-throats hop along from branch to branch while snatching insects and sipping nectar.

And each night, the birds perform something of a magic trick in which their body temperature drops, their heart rate slows, and their metabolisms grind to a halt. It’s only through this torpor that the birds are able to survive, since shutting down allows them to not waste precious energy staying warm. While other hummingbird species may use torpor to get through the winter, hillstars do it on the daily.

Whether it’s gold mining, fires or a lack of native plants, each disturbance to the hummingbird’s adapted lifestyle is like a withdrawal from a bank account that never had much money in it in the first place. The closer you get to zero, even small charges can bring an overdraw.

According to Bonaccorso, the blue-throated hillstar will have little hope of sticking around unless the Ecuadorian government immediately declares all or part of the bird’s range as a nationally protected reserve. The conservation plan must take into account the needs of local communities, too. Ecotourism is one option that could mutually benefit páramo inhabitants, whether farmhands or feathered.

That scientists have now officially described the blue-throated hillstar hummingbird is, of course, the first step in all of this. After all, you can’t save a species that you don’t know is there.