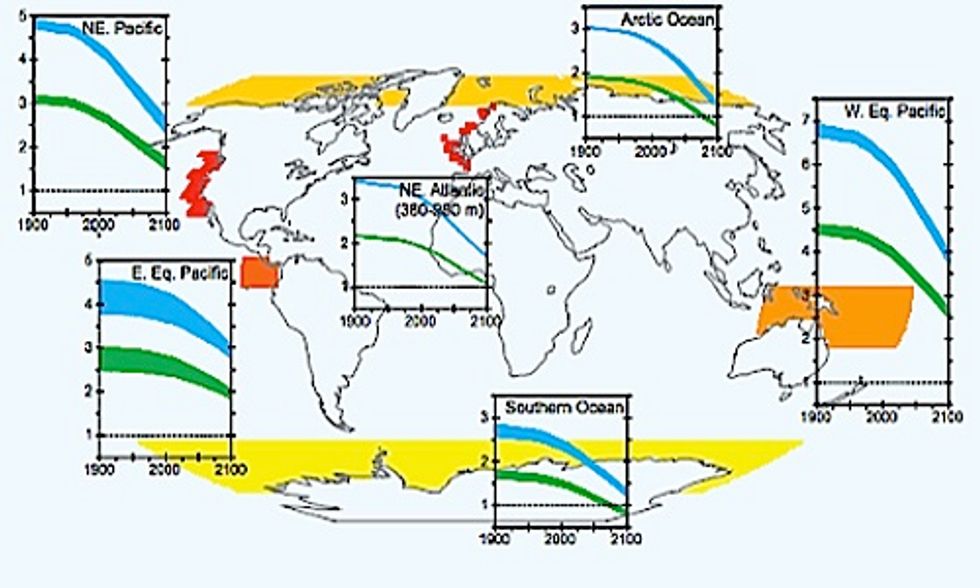 A new study, Valuing the Ocean from Stockholm Environment Institute, takes an in depth look at the various challenges that threaten the health and stability of our ocean’s health. The study has divided the threat to the oceans into six categories: acidification, warming, hypoxia, sea level rise, pollution, and the overuse of marine resources.

Acidification is direct consequence of increased carbon dioxide (CO2) emissions, as the ocean has absorbed 25-30 percent of these emissions over the last 200 years. Surface ocean acidity has increased by 30 percent since the industrial revolution and will continue to increase by 150-200 percent by 2100 at our current rate of emissions, a rate of change 10 times faster then any other event experienced in the ocean in 65 million years. Acidification exposes sea organisms to harmful effects and increased acidification will decrease the ocean’s ability to be a carbon sink, allowing more carbon to exist in the atmosphere.

Warming is another threat as the ocean has absorbed 80 percent of the heat added to the climate system in the last 200 years. Warming negatively effects the ocean’s ecosystems such as shifting fish range habitats and bleaching coral. Ocean warming also is linked to more severe weather event from increased precipitation to drought and tropical cyclones.

Hypoxia—or deoxygenation—is another hazard facing the oceans. Largely caused by the over-enrichment of waters with nutrients and organic matter from fertilizer run-off, sewage and industrial waste; hypoxia prohibits the growth and reproduction of organisms in the ocean. There are now more than 500 known hypoxic dead zones in the oceans endangering important ecosystems.

Sea level rise is caused by melting glaciers, ice caps, ice sheets and thermal expansion of the ocean and changes in terrestrial storage. Sea level rise has accelerated from approximately 1.8 mm per year over the last five decades to 3.1 per year in the 1990s and 2.5 mm per year from 2003-2007. It is a major threat to island nations and communities based along shore lines with some island nations projected to disappear completely with even modest increases.

The overuse of marine resources is the last major danger identified by the study. Over fishing is threatening the long term sustainability of the ocean’s resources. The Food and Agriculture Organization of the UN estimates that 85 percent of fish stocks are fully exploited, over exploited, depleted or recovering from depletion.

The study notes that the impact of these multiple stressors that are often interconnected creates an impact greater then the sum of its parts known as synergistic response. It also looks into the economic costs that will result from these hazards to the world’s oceans.

The ocean covers 70 percent of the planet. It is a major source of food and regulates the planets weather. It’s safety and health is invaluable for the world’s human population.