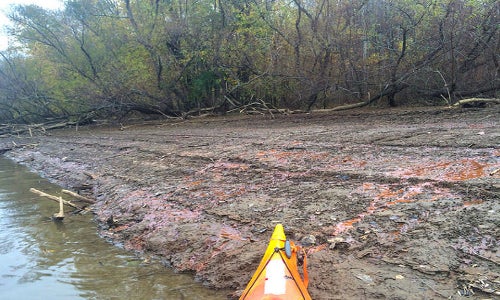 Back in mid-November, two environmental groups—Waterkeeper Alliance and Yadkin Riverkeeper—spotted a gusher of orange goop below the normal waterline of the Yadkin River, pouring from the unlined coal ash impoundments at Duke Energy’s Buck Station in central North Carolina, located next to the river. Naturally they were curious to know what toxins were flowing into their waterway this time, so they had the stuff tested. 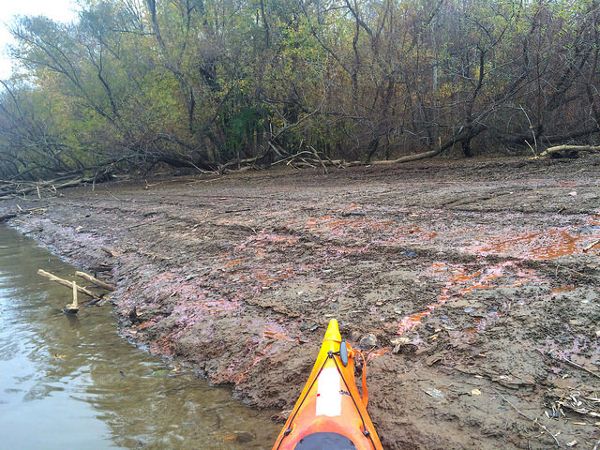 Today the two groups, along with the Southern Environmental Law Center, which is representing them in their ongoing battle over unsafe coal ash storage and pollution at the now-closed Buck Station facility, revealed that the testing showed high levels of arsenic, lead and selenium, along with barium, cadmium, manganese and chromium, all at levels exceeding safe standards for human health. It found known or suspected carcinogens like cadmium at eight times the level allowed for groundwater and surface water. It found arsenic at three times the legal limit and barium at 6,000 times the level deemed safe for human health. These chemicals are routinely found in coal ash.

“This new evidence confirms the extent and magnitude of the coal ash pollution leaking into the Yadkin River,” said John Suttles, senior attorney at the Southern Environmental Law Center. “The volume and level of pollution from Duke’s leaky coal ash lagoons will require more than a band-aid solution to protect the river and nearby communities.”

The leakage was only spotted because the Yadkin River’s water level was lowered to 14 feet less than normal to accommodate a state Department of Transportation project. At normal levels, the flow of coal ash into the river is hidden from view. That suggested to the Waterkeeper Alliance and Yadkin Riverkeeper observers that there may be even more contamination lurking out of sight. 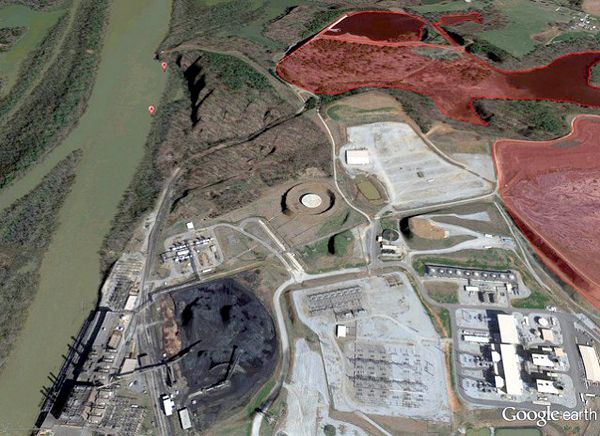 Duke Energy stores coal ash in unlined pits (outlined in red) next to High Rock Lake, an impoundment of the Yadkin River. The two small points to the left represent where the environmental groups found high levels of many toxic heavy metals found in coal ash. Photo credit: Waterkeeper Alliance

“It was deeply unsettling to find that known coal ash contaminants have been leaking directly into the Yadkin river below the waterline for an undetermined period of time,” said Yadkin Riverkeeper Will Scott. “We hope that Duke Energy will take these new leaks as evidence that the only way to protect the Yadkin River from further contamination is to move the ash from Buck to safe, lined storage.”

“Riverkeepers across North Carolina have found dozens of toxic leaks from Duke’s coal ash ponds that you can actually see flowing right out of the impoundment walls and into nearby rivers and streams,” said Pete Harrison, an attorney for Waterkeeper Alliance. “We’ve also been concerned that the contaminated ground water might be leaking into the rivers below the water’s surface, where nobody can see it. These latest tests don’t just confirm our fears, they show that the toxic loading into the water is actually far worse than we’d imagined.”

Although Duke Energy retired its coal-fired units at the Buck Power Station in April 2013, there is still coal ash stored on site. Duke doesn’t appear concerned or feel urgency about taking action, since it has neither announced a closure timetable for the impoundments nor publicly acknowledged any leakage from the coal ash ponds.

A Duke Energy spokeswoman pooh-poohed the environmental groups’ claims saying the river was well-protected, and telling ThinkProgress, “By the way, the orange color is often caused by iron bacteria, a naturally-occurring and non-harmful bacteria that occur commonly in this area because of iron-rich soils.”

How Breathing Coal Ash Is Hazardous to Your Health