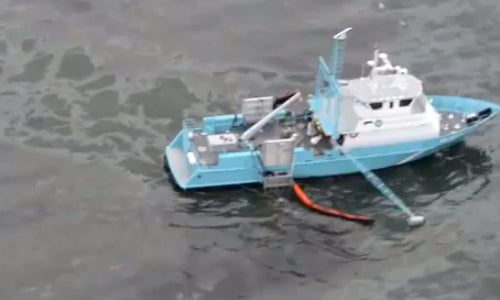 The rush is on to clear up nearly 170,000 gallons of oil that spilled into the busy Houston Ship Channel in Texas City, TX over the weekend after a collision between a barge and ship.

The spill occurred after a barge carrying more than 900,000 gallons of oil collided with a 585-foot ship on the channel, which is one of the world’s busiest waterways, according to The Associated Press. Today marks the third day that the channel has been closed. It connects the Galveston Bay and the Gulf of Mexico and handles as many as 80 vessels per day.

According to Texas Gov. Rick Perry’s office, the barge has been moved to a ship yard away from the scene of the spill.

“This is an extremely serious spill,” said Capt. Brian Penoyer of the U.S. Coast Guard told the Houston Chronicle. “It is a persistent oil.”

The Coast Guard said 24 vessels will continue working to clean 4,000 barrels worth of oil today, about 45 miles from Houston. Winds have spread out the oil, further complicating containment efforts. About 90,000 feet of boom had been set up along the Texas City dike over the weekend. The U.S. Coast Guard says no ships will be allowed to leave port until the oil spill is fully under control.

No timetable has been set for the channel’s reopening, but it is clearly impacting businesses of all sorts, including fishing tackle shops, ferries and tourism.

The spill could impact the bird population as thousands of shorebirds are still in the area. The Bolivar Flats Shorebird Sanctuary is just east of the spill site. It is known to attract 50,000 to 70,000 shorebirds to its muddy, flat terrain.

The Coast Guard said it found and transferred fewer than 10 oiled birds to a wildlife rehabilitation center by Sunday afternoon.

More than 30 vessels, including two cruise ships, were waiting to enter the channel from the Gulf of Mexico as of Sunday night. A cruise ship and 35 vessels were waiting to leave Galveston Bay, according to Lt. Sam Danus told the Houston Chronicle.

Geoff Roberts was fishing Saturday with his wife and friend around the time of the collision. He said he found oil on his own 21-foot-boat and his fishing gear.

“You could see a big oil slick as far as the eye could see,” he said.

Just last week, about 10,000 gallons of oil spilled from a Sunoco pipeline into a nature preserve area near Cincinnati, OH.