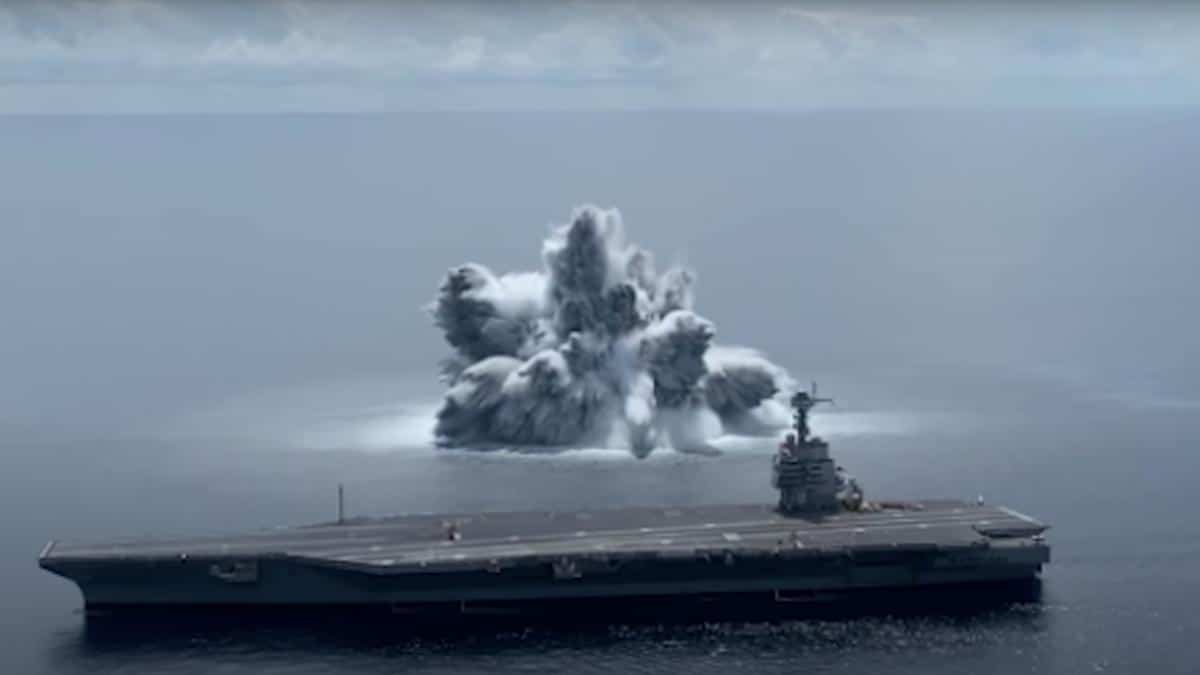 Marine mammal experts this week expressed deep concern over the potentially devastating effects of the U.S. Navy’s recent detonation of 40,000 pounds of explosives off the Atlantic coast of Florida on sea life, while progressive observers blasted what they called the government’s misplaced spending priorities.

The Navy set off the massive blast — which registered as a magnitude 3.9 earthquake on shore — on June 18 about 100 miles off Palm Coast as the first in a series of full ship shock trials on the USS Gerald R. Ford, a $12.8 billion nuclear-powered aircraft carrier commissioned in 2017.

“The U.S. Navy conducts shock trials of new ship designs using live explosives to confirm that our warships can continue to meet demanding mission requirements under harsh conditions they might encounter in battle,” the Navy explained in a press release.

The statement claimed the explosion occurred “within a narrow schedule that complies with environmental mitigation requirements, respecting known migration patterns of marine life in the test area.”

The region is home to various marine mammal species including bottlenose dolphins, humpback whales, and North Atlantic right whales. While whales are not typically seen off the northern Florida coast in June, marine experts nevertheless expressed alarm over potential harm to mammals and other sea life.

“The Navy’s own modeling indicates that some smaller species of marine mammals would be expected to die within one to two kilometers of the blast, and that some marine mammal species would suffer injury including hearing loss out to 10 kilometers of the blast,” Michael Jasny, director of the Natural Resources Defense Council’s (NRDC) Marine Mammal Protection Project, told The Guardian. “That gives some sense of the power of the explosives we are talking about.”

Hey I don’t think this is good for sea creatures @POTUS https://t.co/P7dfnuTcrQ

“A large whale might need to be within a few hundred meters of the blast to die, while a small mammal could be a couple of kilometers away,” added Jasny, who said that even if the animals survive the blast, potential hearing loss still poses a grave risk to species which use that sense to locate food and their companions.

The U.S. Navy has previously come under fire for its use of undersea sonar, which can injure and kill marine mammals. In 2015, the Navy agreed to limit its use of underwater sonar and explosives in particularly sensitive areas for scores of vulnerable species.

While numerous observers worried about the effects of blast testing on marine life, others expressed concerns about misplaced government priorities, with the advocacy group Public Citizen tweeting that “94% of public school teachers spend their own money on school supplies.” Some social media users responded to CBS News’ tweet about the explosion lamenting that the United States still does not have universal healthcare.

Janet Weil, an activist with the peace group CodePink and the Portland, Oregon branch of Extinction Rebellion, called the text a “waste of tax dollars and resources.”