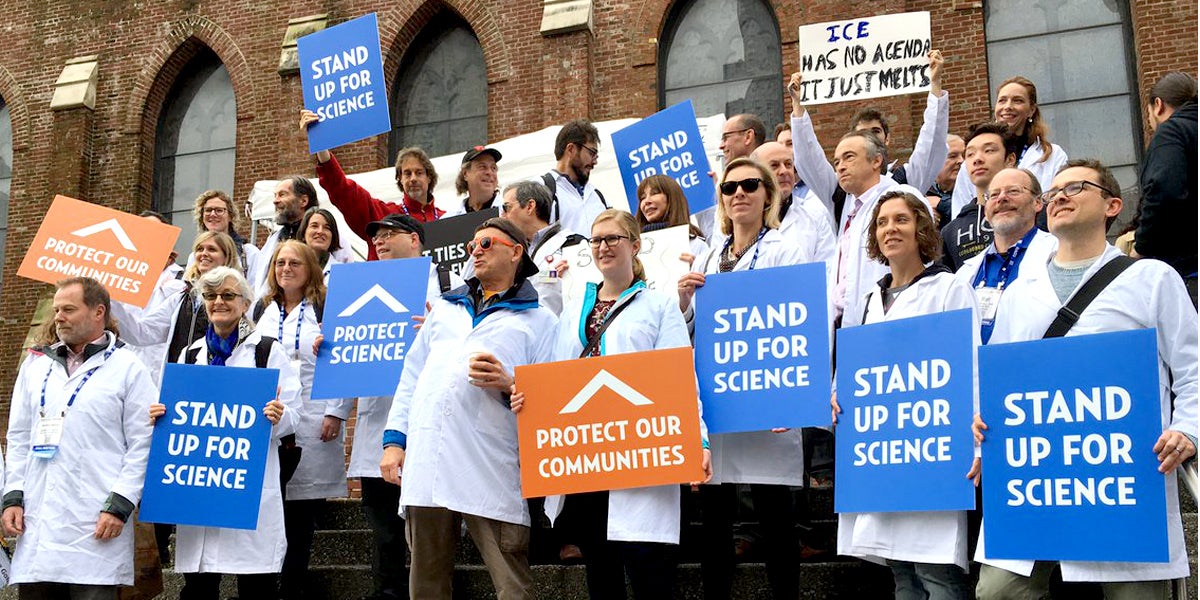 The Department of Energy has refused to respond to the Trump transition team’s chilling 74-question document seeking the names of anyone who has worked on climate change in the department. Climate scientists are also acting feverishly to preserve data after a senior Trump campaign adviser suggested eliminating funding for NASA’s climate research programs.

Scientists are rushing to copy decades of critical climate information that could be altered or destroyed under a hostile Trump Administration.

Two university professors are calling for a hackathon in collaboration with the Internet Archive’s End of Term 2016 project, which will archive federal online pages and data that they fear could disappear after Jan. 20, 2017. Separately, the ad-hoc Climate Mirror project seeks to store key datasets and keep them publicly available.

The Climate Science Legal Defense Fund (CSLDF) has published a 16-page guide for government researchers whose work may be suppressed.

Sentiment is shared at the DOE, which is why they are refusing to share names with Trump’s transition team.

“We are going to respect the professional and scientific integrity and independence of our employees at our labs and across our department,” Energy Department spokesman Eben Burnham-Snyder said in an email to The Washington Post.

The gravest danger to these federal employees may be that they will lose their jobs in an anti-climate purge. “Rather than keep people on the payroll under instructions not to fulfill their position descriptions, it’s likely that such positions would be declared surplus,” PEER’s executive director, Jeff Ruch, told Sierra.

“The election of Donald J. Trump as president puts federal employees administering and enforcing environmental and public health protections squarely on the front lines of a battle—a battle they did not choose,” stated Public Employees for Environmental Responsibility (PEER).

In response, scientists are speaking out. “We cannot normalize science denial,” the Union of Concerned Scientists stated.

On Nov. 30, more than 2,300 scientists published an open letter to Trump urging him to allow them to “conduct their work without political or private-sector interference.” And, a Dec. 6 letter from 800 Earth scientists, also to the president-elect, stated:

“You have the support of the majority of companies, military leaders, scientists, engineers, and citizens to respond to the threats posed by climate change by reducing carbon pollution and expanding clean energy. Many of America’s largest cities and states are already committed to doing so. We urge you to decide if you want your Presidency to be defined by denial and disaster, or acceptance and action.”

The hashtag #StandUpForScience has become a top Twitter trend and is seen on signs held by demonstrators at the American Geophysical Union meeting underway today in San Francisco.

Concerns over preserving climate data and protecting Department of Energy jobs is far from the only environmental issue raised by the incoming Trump Administration.

President-elect Donald Trump has named Scott Pruitt to head the U.S. Environmental Protection Agency (EPA). Pruitt, Oklahoma’s attorney general, is a party to a 28-state lawsuit seeking to to overturn the Obama Administration’s Clean Power Plan. He has sued the EPA eight times.

Trump has also named ExxonMobil CEO Rex Tillerson as Secretary of State and former Texas Gov. Rick Perry to lead the Department of Energy, which he once vowed to shut down.