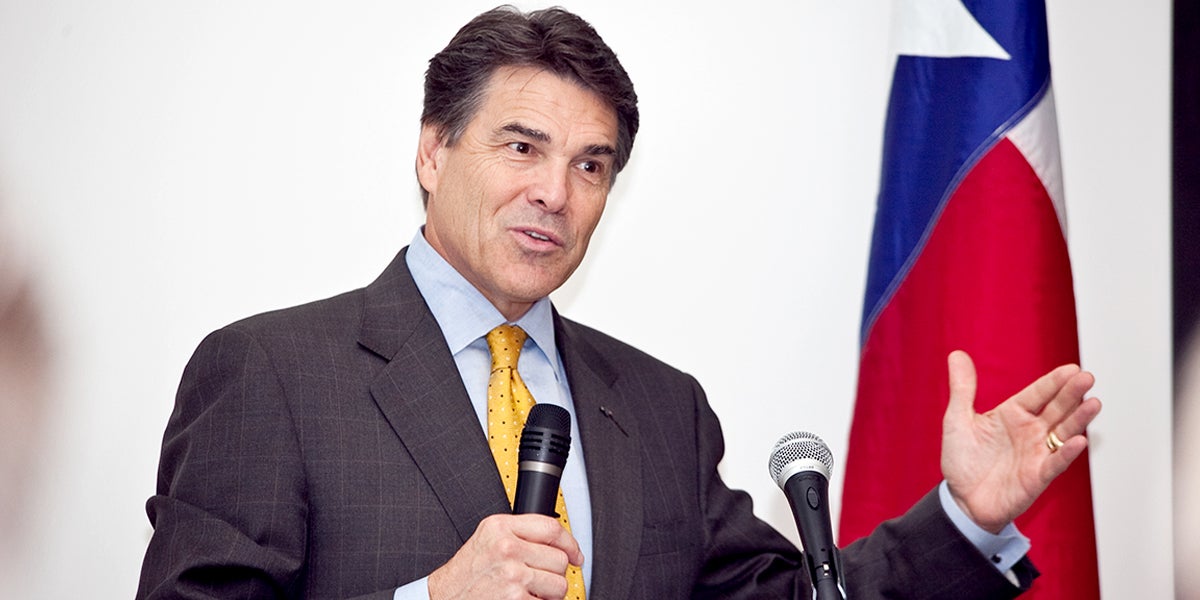 Perry, the former chairman of the Interstate Oil and Gas Compact Commission (IOGCC), ran for president as part of the Republican Party primaries in 2015, but his campaign ended quickly. He announced his run for the Oval Office in 2015 while facing felony charges for official state corruption in Texas. As reported by DeSmog at the time, at a 2015 town hall meeting in Iowa during his short-lived presidential run, Perry was asked by someone in the audience about his Energy Transfer Partners board position. Perry said that he thought his ties to DAPL were “irrelevant, frankly” in response to the question.

“All of our sources of energy in this country will be important,” Perry said at the town hall. “If America is going to be energy secure, we’re going to have to have infrastructure. I happen to think it’s important for us as a country to have these sources of energy.”

One of Perry’s donors for his short-lived presidential run was Kelcy Warren, CEO of Energy Transfer Partners, who also served as a major donor to Trump’s presidential campaign. Warren also sat on the advisory board for Perry’s 2015 run for president.

After Trump’s election, Warren expressed a sense of elation over the future of the hotly-contested DAPL, which has erupted into the largest and most prolonged grassroots direct action mobilization against a pipeline in U.S. history at the Standing Rock Sioux Tribe’s reservation in North Dakota.

In a recent interview with Fox News’ Chris Wallace, Trump said that when he takes office on Jan. 20, 2017, he plans to move forward and approve the currently stalled DAPL. Until recently, Trump owned tens of thousands of dollars worth of Energy Transfer Partners stock. Trump’s energy adviser for his presidential campaign and major donor, Harold Hamm—CEO and founder of Continental Resources—also will see some of his company’s oil flow through DAPL.

Ironically, the U.S. Department of Energy (DOE) Perry will now head up is an agency he said he would get rid of during his run for the presidency during the 2012 election cycle. In a 2011 GOP primary debates, in a now unforgettable gaffe, Perry actually forgot the name of it when he proclaimed he’d throw it by the wayside.

Perry, a vocal supporter of slashing regulations as applied to the oil and gas industry, is also a climate change denier.

He does have some experienced heading up an energy-related agency, or at least a quasi-agency which functions much more like a lobbying organization: the IOGCC. IOGCC serves as an interstate compact of the 30 oil and gas states.

Under Perry’s leadership, IOGCC pushed through a model resolution in multiple states which called for the maintenance of what is often referred to as the “Halliburton Loophole.” That provision tucked into the Energy Policy Act of 2005 created a U.S. Environmental Protection Agency (EPA) enforcement exemption, as applied to hydraulic fracturing (“fracking“) for oil and gas, for the Safe Drinking Water Act and Clean Water Act.

At the time, a bill called the FRAC Act was moving through Congress, which called for the lifting of the exemption. Trump’s choice to head the U.S. Department of Justice, U.S. Sen. Jeff Sessions (R-AL), as reported by DeSmog, introduced the first “Halliburton Loophole” bill back in 1999.

In a press statement reacting to Trump’s nomination of Perry to serve as Energy Secretary, the environmental advocacy group Friends of the Earth said that Perry is “uniquely unqualified” for the job.

“Rick Perry might be uniquely unqualified to run the Department of Energy,” said Friends of the Earth Executive Director Ben Schrieber. “He has so little regard for the agency that he has pushed for it to be eliminated during his presidential race.”

“Governor Perry also has serious conflicts of interest that should disqualify him from the job. Perry is on the payroll of the company that attacked Indigenous people in an effort to forcibly construct the Dakota Access Pipeline.”

The future of DAPL is somewhat up in the air and those on the ground in Standing Rock have pledged continued resistance through the winter as necessary. But at least in so far as the Trump Administration goes, with the naming of Perry to head the DOE, the old adage applies: personnel is policy.