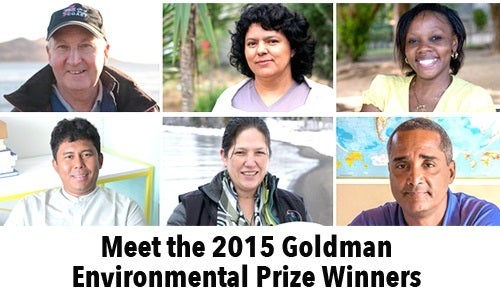 Just as in past years, this year’s winners persevered in the face of extreme adversity. Photo credit: Goldman Environmental Foundation

The prize “recognizes fearless grassroots activists working against all odds to protect the environment and their communities.” The winners of the prize “often work in countries where violence and death threats against environmental defenders are on the rise, as documented in a report from Global Witness released today,” says the Goldman Environmental Foundation.

The prize was established by late San Francisco civic leaders and philanthropists Richard and Rhoda Goldman. Prize winners are selected by an international jury from confidential nominations submitted by a worldwide network of environmental organizations and individuals. The winners will be awarded the prize at an invitation-only ceremony tonight at 5:30 p.m. PDT at the San Francisco Opera House (this event will be live streamed online). A ceremony at the Ronald Reagan Building and International Trade Center in Washington, DC will follow on April 22 at 7:30 p.m. EDT.

This year’s winners are:

After learning her own breast milk was making her baby sick—and realizing her child wasn’t the only one suffering from lead poisoning—Phyllis Omido galvanized the community in Mombasa to shut down the smelter that was exposing people to dangerous chemicals.

Facing heavy government scrutiny and restricted use of tools like email or social media, journalist and activist Myint Zaw launched a national movement, which included the use of art exhibitions, to successfully stop construction of the Myitsone Dam on Myanmar’s treasured Irrawaddy River. The dam would have displaced over 12,000 indigenous people and destroyed the watershed while exporting 90 percent of the energy generated to China.

After witnessing the severe degradation of the Isle of Arran’s marine environment from destructive commercial fishing practices, Howard Wood, a recreational diver spearheaded the establishment of Scotland’s first community-developed Marine Protected Area, leading to a dramatic recovery of biodiversity.

A former chief of the Xeni Gwet’in First Nation, Marilyn Baptiste led her community in defeating not one but three attempts by a powerful mining company to construct British Columbia’s largest gold and copper mine, which would have destroyed Fish Lake—a source of spiritual identity and livelihood for the Xeni Gwet’in.

In a country with growing socioeconomic inequality and human rights violations, Berta Cáceres rallied the indigenous Lenca people of Honduras and waged a grassroots campaign that successfully pressured the world’s largest dam builder to pull out of the Agua Zarca Dam.