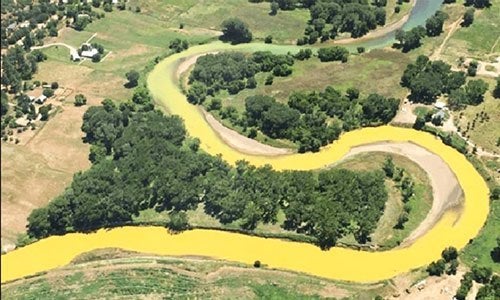 Just days after workers with the Environmental Protection Agency (EPA) accidentally spilled a million gallons of toxic mine waste into a Colorado waterway, the free-flowing sludge that turned portions of the state’s Animas River orange reached New Mexico, where health and wildlife officials say they were not alerted to any impending contamination. 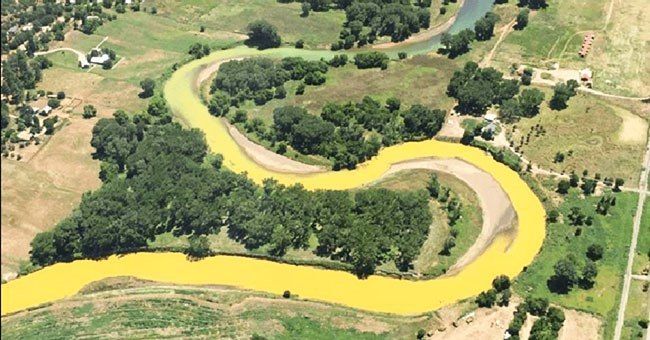 The Animas River in Colorado turned orange with toxins after a spill sent a million gallons of mine waste into a waterway last week. Photo credit: La Plata County Emergency Management

As the cities of Aztec and Bloomfield scrambled to cut off the river’s access to water treatment plants, they criticized the EPA for what they said was a lackluster effort in providing warnings or answers about the spill. The contaminants seeping into the river—at a rate of 548 gallons per minute—include arsenic, copper, zinc, lead, aluminum and cadmium.

The Animas flows into the San Juan River in New Mexico, which in turn joins the Colorado River in Utah’s Lake Powell.

Workers unleashed the waste while using heavy machinery to investigate toxic materials at Colorado’s non-functioning Gold King Mine. But the accident, while “unexpected” by EPA’s admission, is a reminder that defunct mines still heavy with contaminates exist throughout the West.

Until the late 1970s there were no regulations on mining in most of the region, meaning anyone could dig a hole where they liked and search for gold, silver, copper or zinc. Abandoned mines fill up with groundwater and snowmelt that becomes tainted with acids and heavy metals from mining veins which can trickle into the region’s waterways. Experts estimate there are 55,000 such abandoned mines from Colorado to Idaho to California and federal and state authorities have struggled to clean them for decades. The federal government says 40 percent of the headwaters of Western waterways have been contaminated from mine runoff.

There are a number of factors which contribute to the abandonment of such sites. One is cost, as cleaning up toxic materials can be an expensive endeavor. But more complex is the legal liability involved. According to the Clean Water Act, anyone who “[d]ischarges a pollutant from a point source into a water of the U.S.” without a permit can be prosecuted for a federal crime, even if they were trying to clean up pollution. That has prevented green groups from engaging in those cleanup efforts—particularly as an ongoing push for a “Good Samaritan” exception to the law has gone ignored by the federal government, AP writes.

“There’s still a whole generation of abandoned mines that needs to be dealt with,” Steve Kandell of Trout Unlimited, one of the organizations backing the “Good Samaritan” bill, told the AP.

Yet that ongoing issue is exactly what the EPA crew had been attempting to address last week—and the reason it won’t accept help. The Denver Post reports:

Silverton and San Juan County officials have resisted efforts to launch a full-scale federal “Superfund” cleanup to address this problem due to fears of a stigma that could hurt the tourism they count on for business.

“These are historic abandoned mines that have had acid drainage for decades. That is the very reason why we were up there,” EPA regional chief McGrath said. “We were trying to reach that drainage coming off the Gold King Mine. They were trying to put in a treatment system.

“We have been in conversations with the town of Silverton … and the state of Colorado about listing this area under Superfund. And if it is listed then, of course, removal (of waste) is part of Superfund that would allow us to take action up there. We have not been able to move this area to a listing under the Superfund.”

In the meantime, cities have closed access of the river to recreational and agricultural users, while health and wildlife officials conduct additional tests to determine the potential impacts of the spill. Long-term exposure to arsenic and lead can be fatal to humans.

Recent heavy rains have also raised the prospect that some of the waste which washed up onshore as it flowed down the Animas last week would rinse back out into the river, causing additional damage.

“It’s hard to know what is going to happen as more river flows join it,” EPA’s on-scene coordinator Craig Myers, in Durango, told the Post. “It is diluting. (The sludge of contaminants) is going to be settling out in places.”

La Plata county director of emergency management Butch Knowlton was more direct in his assessment. “The population that lives along this river is at the mercy of the EPA,” he said.

1 Million Gallons of Mine Waste Turns River in Colorado Orange