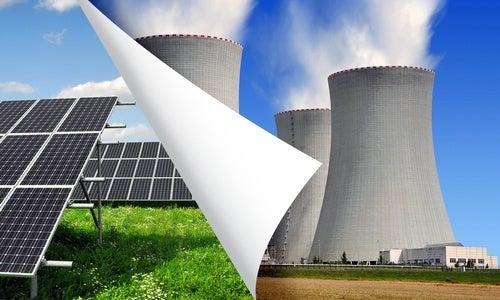 The urgency of expanding clean energy implies that nuclear power, presently the largest source of carbon-free energy and historically the clean-energy source of fastest scale-up, likely must play an important role in meeting needs for dispatchable electric power, carbon-neutral fuels and fresh water.

Nuclear is an opportunity cost relative to clean, renewable wind, water and solar energy because of

a. the significant lag time between planning and operation of a nuclear plant relative to a wind, solar, or geothermal plant;

b. higher carbon emissions of nuclear per unit energy; and

c. nuclear weapons proliferation risks, meltdown risks, waste disposal risks, and uranium mining risks. As such, the only basis for nuclear growth is if 100% wind, water and solar is not possible. However, because the technical feasibility of 100% wind, water and solar across 139 countries and 50 states has been shown to be possible, evidence suggests at this time that a solution can be obtained without nuclear.

This time includes 3.5-6 years to find a site, obtain a permit for the site, and obtain financing for the reactor, 2-3 years for the review and approval of the construction permit, 0.5-1 years between permit approval and issue, and 4-9 years for construction. (Jacobson, Energy and Environmental Science, 2, 148-173, 2009).

On the other hand, onshore wind and solar require an average of 2-5 years. A wind farm takes an average of 1-3 years for siting, purchasing or leasing land, monitoring winds, negotiating a power-purchase agreement and permitting. The construction period for a large wind farm is 1-2 years. A solar photovoltaic or concentrated solar power plant is also 2-5 years. Geothermal requires 3-6 years. (See citations in Jacobson, Energy and Environmental Science, 2, 148-173, 2009).

Nuclear is not carbon free and emits 6-24 times more carbon-dioxide equivalent emissions than wind per unit energy produced over the same 100-year period. Such emissions include those during (a) planning, permitting, constructing, operating, refurbishing and decommissioning a nuclear plant versus a wind turbine and (b) the emissions associated with reducing carbon sequestration in soil by covering the soil with impermeable material or by mining.

IPCC (2014) Section 7.8.1 (P. 540) suggests that the range in lifecycle carbon emissions from nuclear is 4-110 g-CO2-eq/kWh: The ranges of harmonized lifecycle greenhouse gas emissions reported in the literature are … 4-110 gCO2eq/kWh for nuclear power. 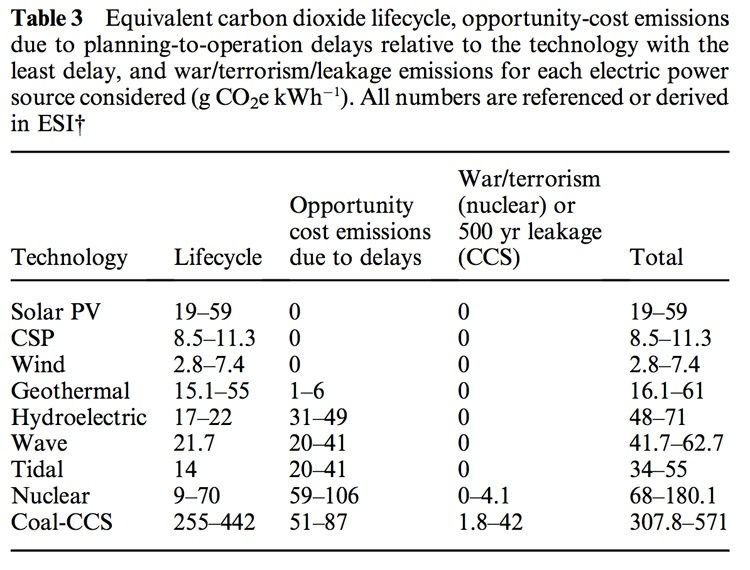 The figures in this document further summarize the comparison of all emissions from nuclear (LCA, OC, soil emissions and others) relative to all wind, water and solar technologies.

The net result of the data in the figures is that nuclear carbon-equivalent emissions per unit energy range from 6-24 times those of wind power, thus they are not zero.

Dr. Hansen argues that nuclear power “must” play an important role in the future. However, there is no scientific basis for this statement and his claim does not address the problems with nuclear power identified by the international community. First, whereas IPCC (2014) suggests that nuclear could play a role, they also imply that a solution can be obtained without nuclear. Specifically, they state that some proposed mitigation options may not be necessary:

IPCC (2014) FAQ 7.2. P. 569. The main mitigation options in the energy supply sector are energy efficiency improvements … use of renewable energy, use of nuclear energy, and carbon dioxide capture and storage (CCS) … A combination of some, but not necessarily all, of the options is needed.

Second, in the executive summary, IPCC (2014) clearly summarizes significant issues regarding nuclear power that Dr. Hansen does not discuss and that have not been resolved to date. IPCC (2014) states there is “robust evidence and high agreement” regarding these issues:

IPCC (2014) Section 7.6. P. 533. Studies of high variable RE penetration (8 citations, including Delucchi and Jacobson, 2011) and the broader literature (2 citations) suggest that integrating significant RE generation technology is technically feasible, though economic and institutional barriers may hinder uptake … The determination of least-cost portfolios of those options that facilitate the integration of fluctuating power sources is a field of active and ongoing research (citations).

Since the publication of IPCC (2014), Jacobson et al. (Proc. Natl. Acad. Sci., 112, doi: 10.1073/pnas.1510028112, 2015), found multiple low-cost solutions to the grid integration problem across the 48 contiguous United States when 100% wind, water and solar (WWS) generation for all energy sectors (electricity, transportation, heating/cooling, industry) was combined with low-cost storage, demand-response and hydrogen production. Roadmaps were subsequently developed for 139 countries. In sum, if 100% wind, water, solar works for each state and country as suggested in these studies, there appears to be no need for the growth in nuclear power. Because of the significant lead time, lesser carbon benefit, weapons proliferation risk, meltdown risk, waste risk and uranium mining risk, nuclear appears to be an opportunity cost relative to clean, renewable energy.

At high penetrations of intermittent renewables, baseload power becomes more expensive and more difficult to complement renewables. This effect is summarized in IPCC (2014), Section 7.6.1.1, P. 534, which states, …high shares of variable RE power, for example, may not be ideally complemented by nuclear, CCS, and CHP plants (without heat storage).

Response 3a: Regarding (1) carbon footprint, see Response 1b.

Response 3b: Regarding (2) slow decarbonization by nuclear, see Response 1a.

Referring to Jacobson et al. (Energy and Environmental Sciences, 8, 2093-2117, 2015). Not included in this chart is the “water” portion of this proposed renewable power installation: it is equivalent to 50 Hoover dams, one for each state; although the proposition is to do this with a larger number of smaller dams, it is not clear that these dams would be welcomed by all environmentalists.

Response: This statement is incorrect. Table 2 of Jacobson et al. (2015), shows that the 50-state roadmaps call for only 3 new conventional hydroelectric plants (thus dams), not 50, and they are all proposed for Alaska (thus none in the 48 contiguous states). The ones in Alaska can also be substituted for wind. The 48-contiguous-state grid integration study, (Jacobson et al., Proc. Natl. Acad. Sci., 112, doi: 10.1073/pnas.1510028112, 2015), similarly calls for zero new hydroelectric dams in these states. It does allow for pumped hydroelectric storage facilities that are existing plus those with pending licenses and preliminary and pending preliminary permits, but many of these exist already and they are nothing like Hoover Dam.

Similarly, the 139 country 100% wind, water, solar roadmaps, propose zero new conventional hydroelectric dams for any country. The efficiency of existing hydroelectric plants is proposed to increase, and existing plus planned pumped hydroelectric will also be used.