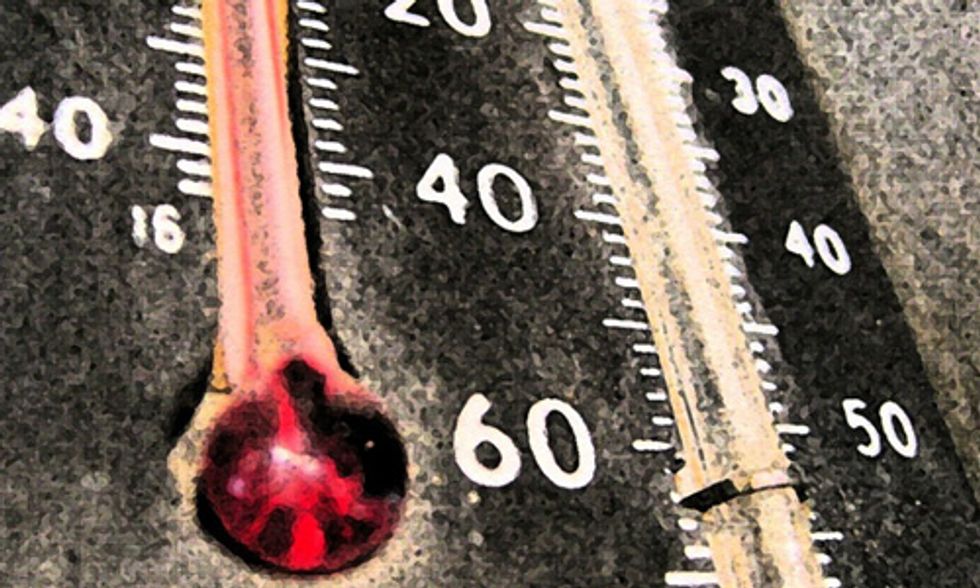 Earth is on a roll.

Adding "yet another month to a new mountain chain of extreme global temperature peaks," March 2016 was the warmest since at least 1891, according to the Japan Meteorological Agency (JMA).

"One stunning feature from the March 2016 temperature map was just how universally warm the month was," writes NOAA scientist. Photo credit: fuzzytractor/flickr/cc)

Not only that, but, as February did, March broke the previous record by the greatest margin yet seen for any month. Compared to the 20th-century average, March was 1.07°C hotter across the globe, according to the JMA figures, while February was 1.04°C higher.

If April also sets a monthly record—and there's no reason to think it won't—"the Earth will have had an astonishing 12 month string of record-shattering months," writes Andrew Freedman for Mashable.

The JMA's findings are likely to be confirmed by forthcoming reports from the UK Met Office as well as NASA and NOAA, whose satellite data indicates last month was the warmest March in records dating to 1979.

Scientists have pinned the record warmth to a combination of human-caused climate change and this year's strong El Niño event.

Responding to the news, professor Michael Mann, a climate scientist at Penn State University, told the Guardian: "Wow. I continue to be shocked by what we are seeing."

"The [new data] is a reminder of how perilously close we now are to permanently crossing into dangerous territory," Mann said. "It underscores the urgency of reducing global carbon emissions."

As Common Dreams reported, last month's NASA data showed that February 2016 was not only the hottest in recorded history, but it soared past all previous records, prompting scientists to describe the announcement as "an ominous milestone in our march toward an ever-warmer planet."

Meanwhile, NOAA said last week that March 2016 was among the warmest on record for the contiguous United States, and that Alaska had seen "its warmest start to the year on record, while 32 states across the West, Great Plains, Midwest and Northeast were much warmer than average" between January and March.

What's more, pointed out NOAA climatologist Deke Arndt in a blog post this week, "If you were alive during March 2016, and I'm betting you were, you witnessed U.S. history."

"One stunning feature from the March 2016 temperature map was just how universally warm the month was," wrote Arndt. "Every one of the 357 climate divisions across the contiguous United States and Alaska ended up—at least—in the 'warmer than normal' category."