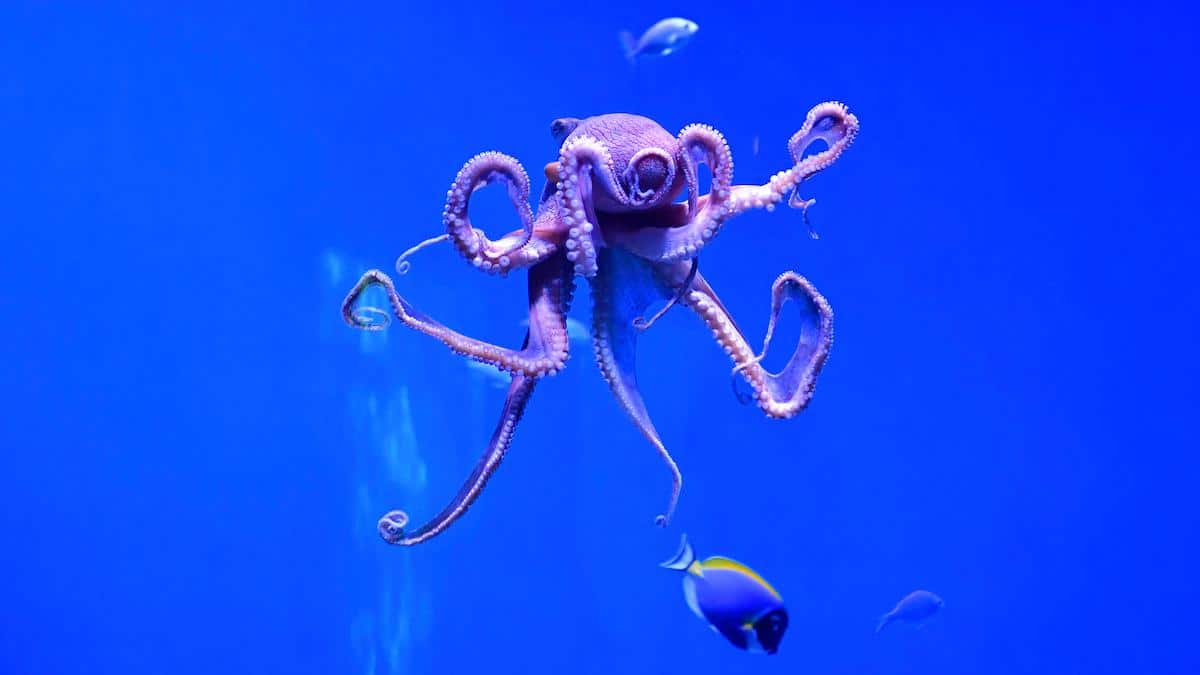 A day octopus, also known as the big blue octopus, found in both the Pacific and Indian Oceans, at the Aquarium of the Pacific in Long Beach, California on May 27, 2021. FREDERIC J. BROWN / AFP via Getty Images

A new animal welfare law in the UK may soon recognize decapods, like lobsters and crabs, and cephalopods, like octopi, as sentient beings. The classification means that the government would officially recognize that these animals feel pain.

This distinction will then need to be considered in future policymaking decisions.

The proposal is an extension to the UK’s existing Animal Welfare (Sentience) Bill, which originally categorizes all animals with backbones as sentient creatures. The new additions for decapods and cephalopods would add several invertebrates to the law, including lobsters, crab, shrimp, octopi, and squid, all of which are often caught and slaughtered brutally for consumption.

There will be no immediate effect on current industry practices or restaurant kitchens should the bill pass, but it does set the stage to create new laws and protections for these animals. For example, it could prohibit the act of boiling lobsters alive — common in cooking — because of their ability to feel pain and suffering. Switzerland, Norway, and New Zealand already ban this practice. It may also introduce more humane ways of capturing the animals.

A recent report from the London School of Economics found evidence of sentience in decapods and cephalopods through analysis of more than 300 studies. The researchers used eight criteria for determining likelihood of sentience, such as possession of nociceptors, responses to anaesthetics or analgesics, and whether or not the animals exhibited self-protecting tactics when injured or threatened. The authors found it very likely for these creatures to feel pain.

“In the light of these evaluations, the authors make a strong recommendation that all cephalopod molluscs and decapod crustaceans should be regarded as sentient animals for the purposes of UK animal welfare law,” Nicola S. Clayton, professor of comparative cognition at University of Cambridge, said in the report. “They recommend against declawing, nicking, eyestalk ablation and the sale of live decapod crustaceans to untrained, non-expert handlers, and they include suggestions for best practices for transport, stunning and slaughter.”

The government responded with a proposed expansion of the Animal Welfare Bill to include cephalopods and decapods. The proposal is currently making its way through the UK Parliament’s House of Lords, then it will move to the House of Commons.

“The UK has always led the way on animal welfare and our Action Plan for Animal Welfare goes even further by setting out our plans to bring in some of the strongest protections in the world for pets, livestock and wild animals,” Animal Welfare Minister Lord Zac Goldsmith said in a press release. “The Animal Welfare Sentience Bill provides a crucial assurance that animal wellbeing is rightly considered when developing new laws. The science is now clear that decapods and cephalopods can feel pain and therefore it is only right they are covered by this vital piece of legislation.