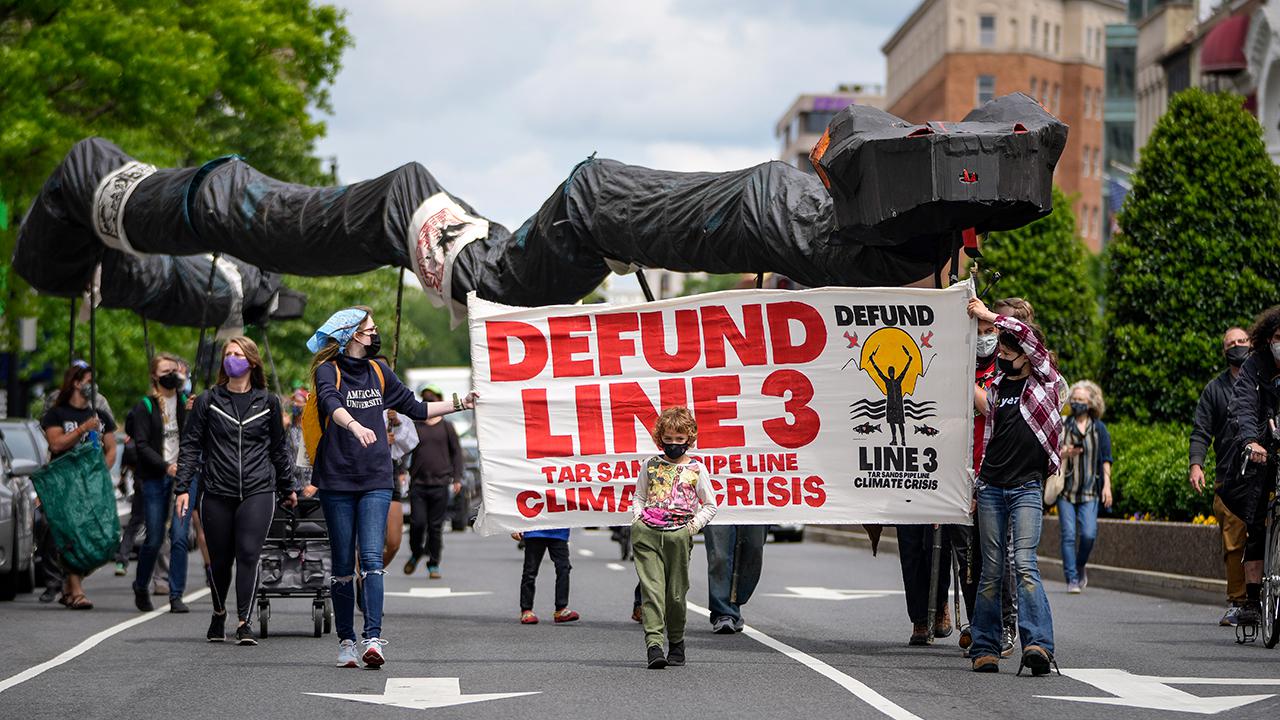 Environmental activists carry a large snake pipeline as they protest against the Enbridge Line 3 oil pipeline on May 7, 2021 in Washington, DC. Drew Angerer / Getty Images

From fake oil spills in Washington, D.C. and New York City to a “people mural” in Seattle spelling out “Defund Line 3,” climate and Indigenous protesters in 50 U.S. cities and across seven other countries spanning four continents took to the streets on Friday for a day of action pushing 20 banks to ditch the controversial tar sands pipeline.

“Against the backdrop of rising climate chaos, the continued bankrolling of Line 3 and similar oil and gas infrastructure worldwide is fueling gross and systemic violations of human rights and Indigenous peoples’ rights at a global scale,” said Carroll Muffett, president of the Center for International Environmental Law.

“It’s time for the big banks to recognize that they can and will be held accountable for their complicity in those violations,” Muffett added. His organization is part of the Stop the Money Pipeline coalition, more than 150 groups that urge asset managers, banks, and insurers to stop funding climate destruction.

#Line3 is being built through Indigenous territory without consent. If built, Line 3 would release as much greenhouse gas into the atmosphere as 50 new coal-fired power plants. It's time for banks like @WellsFargo @jpmorgan & others to stop financing climate chaos. #DefundLine3 pic.twitter.com/Es7MXsgq1T

The global protests on Friday follow on-the-ground actions that have, at times, successfully halted construction of Canada-based Enbridge’s Line 3 project, which is intended to replace an old pipeline that runs from Alberta, through North Dakota and Minnesota, to Wisconsin. The new pipeline’s route crosses Anishinaabe treaty lands.

Simone Senogles, a Red Lake Anishinaabe citizen and organizer for Indigenous Environmental Network, declared that “no amount of greenwashing and PR can absolve these banks from violating Indigenous rights and the desolation of Mother Earth.”

“By giving credit lines to Enbridge, these institutions are giving the oil company a blank check to attack Anishinaabe people, steal our lands, and further guide this planet into climate chaos,” Senogles said. “Those who financially back Enbridge are directly implicated in its crimes. To put it bluntly, blood is on their hands.”

TODAY: Indigenous rights & climate activists protest branches of 20 banks across 4 continents, 8 countries, and 50+ U.S. cities to urge them to #DefundLine3

Line 3 violates Indigenous rights and if built, would release as much greenhouse gas as 50 coal-fired power plants 😷🌎 pic.twitter.com/g6d9zdfbXm

The Stop the Money Pipeline coalition launched the #DefundLine3 campaign in February. At the time, Tara Houska — a citizen of Couchiching First Nation, tribal attorney, and founder of the Giniw Collective — wrote for Common Dreams:

It is from this sense of duty that I am asking you to join us in this campaign. Together, I know that we can do this. Throughout history people-powered movements have changed the world. And they sure as hell can stop Line 3.

Appearing on Democracy Now! Friday, Jackie Fielder of Stop the Money Pipeline noted that “Line 3 would result in an additional 193 million tons of greenhouse gases every single year, and it violates Indigenous rights of the Anishinaabe people and their right to free, prior, and informed consent.”

WATCH 📺 Our very own @JackieFielder_ on @democracynow this morning talking about our Global Day of Action.

The 20 banks behind Enbridge's Line 3 pipeline are financing climate chaos and the violation of Indigenous people's right to Free, Prior, and Informed Consent (FPIC) pic.twitter.com/myO09tDOlr

While critics of Line 3 continue to call on U.S. President Joe Biden to intervene and block the pipeline, activists also hope that increasing pressure on banks could quash not only this project but others like it.

“Wall Street may think it can keep profiting off disrespect for Indigenous rights and desecration of the natural world, but it needs to think again,” said Moira Birss, climate and finance director at Amazon Watch. “From the Kichwa in the Amazon to the Anishinaabe in Minnesota, Indigenous peoples and their allies are ramping up resistance, and we will hold accountable the financial enablers of this destruction.”

As 350.org co-founder Bill McKibben explained: “Let’s just say it straight. These banks are trying to profit off the end of the world, and the ongoing desecration of Indigenous land. History will judge them for it, but we’re trying to speed up the process.”

Activists and supporters shared updates from the protests on social media:

Today we smeared fake oil over @WellsFargo. The bank is one of the world's biggest climate criminals. It is making a killing from the Line 3 oil pipeline – committing atrocities against indigenous people & accelerating the climate crisis. Wells Fargo must #DefundLine3 NOW. pic.twitter.com/WfdB4iW1ch

Line 3 is being built through Indigenous territory without consent.

BREAKING: we’re outside @wellsfargo in London calling for them to pull their money out of a climate wrecking tar sands pipeline in North America.

We stand with indigenous communities to demand they #DefundLine3 @StopMoneyPipe posters by Jan Burger and Isaac Murdoch pic.twitter.com/ta6BvRyzeO

“Nearly every major U.S. bank has now promised that they will align their business with the Paris agreement,” noted Alec Connon, Stop the Money Pipeline coalition co-coordinator. “But the fact that those exact same banks are continuing to bankroll a tar sands oil pipeline that is completely incompatible with the Paris agreement and curtailing climate chaos shows just how hollow their promises are.”

The 2015 Paris agreement’s more ambitious goal is to limit global temperature rise to 1.5˚C by the end of the century. However, based on nations’ current plans to cut planet-heating emissions, the world is on track to hit 2.4˚C of warming by 2100, according to a projection published earlier this week by the Climate Action Tracker.

Osprey Orielle Lake, executive director of Women’s Earth and Climate Action Network, asserted that “financial institutions must be held accountable for their role in financing the destruction of the climate, the violation of Indigenous rights, escalating harms to public health during a pandemic, and increased rates of violence toward Indigenous women living near ‘man camps’ associated with pipeline construction.”

“In solidarity with Indigenous leaders, we are calling for fossil fuel divestment to protect the water and climate, and the health and survival of Indigenous communities,” she said. “As multiple crises in 2021 proliferate, business as usual must not and cannot continue.”

“Now is the time for financial institutions to align with the Paris agreement, respect human rights, divest from Line 3 and planet-wrecking companies, and instead invest in our communities, renewable energy, and a regenerative economy,” she added. “There is no time to lose!”