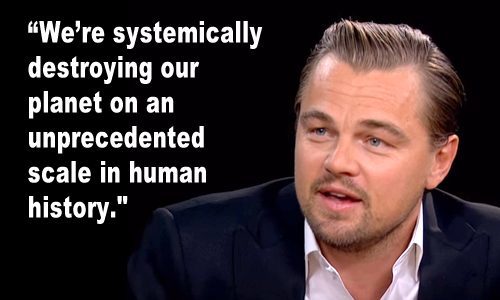 For those who missed the Golden Globes on Sunday night, The Revenant won big. Leonardo DiCaprio took home Best Actor for his role as an 1820s frontiersman Hugh Glass. Alejandro G. Iñárritu won a Golden Globe for Best Director. And, the film won for Best Motion Picture Drama.

Charlie Rose had the chance to sit down with DiCaprio and Iñárritu prior to the awards ceremony to talk about the film.

While filming for The Revenant, DiCaprio said he saw how “we’re systemically destroying … our planet on an unprecedented scale in human history.”

The impacts of climate change really hit home for the cast and crew, he said. “We’re seeing firsthand so many climatic changes that we had to change locations to the southern tip of Argentina just to find snow, and here we are today seeing unprecedented weather events all over the world,” DiCaprio explained.

Here’s a segment from Charlie Rose where DiCaprio shared how the film was a “turning point” in his life: