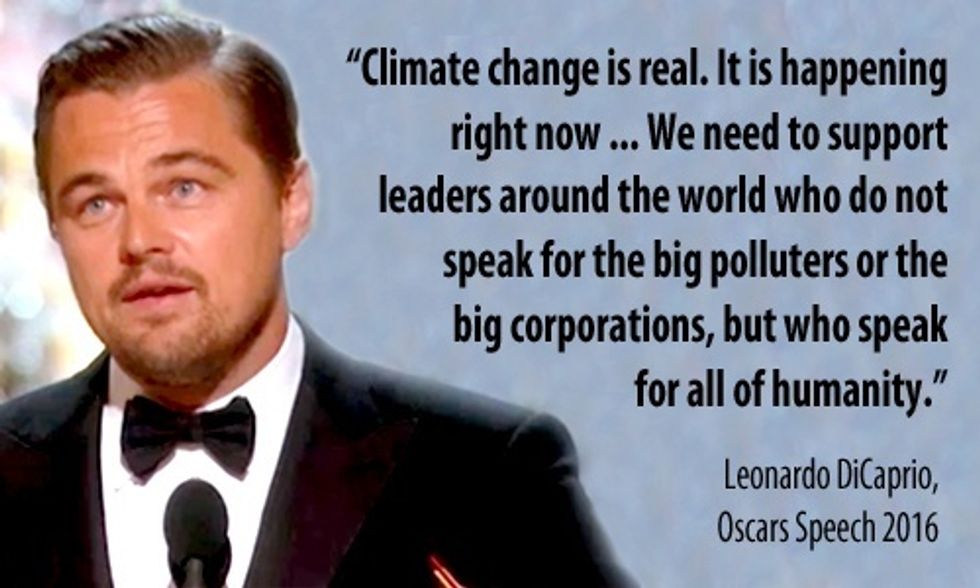 After six nominations, Leonardo DiCaprio won his first Oscar for Best Actor for his role in The Revenant at last night’s Academy Awards. The noted environmental activist devoted half of his acceptance speech to call for urgent collective action to fight climate change, calling it “the most urgent threat facing our species.”

The 41-year-old actor, who was favored to win the Oscar and had swept the Best Actor category in every major award show leading up to the Academy Awards, first thanked the cast and crew in his speech and then shined a spotlight on a his passion project.

"Making The Revenant was about man's relationship to the natural world. A world that we collectively felt in 2015 as the hottest year in recorded history," he said, describing how the entire production needed to move to the southern tip of this planet in Argentina just to be able to find snow.

"Climate change is real, it is happening right now," DiCaprio continued. "It is the most urgent threat facing our entire species, and we need to work collectively together and stop procrastinating."

He also spoke about the need to support leaders who fight the biggest polluters, as well as the need to stand up for the rights of indigenous people and for the "billions and billions of underprivileged people" affected by a warming planet.

"For our children’s children, and for those people out there whose voices have been drowned out by the politics of greed. I thank you all for this amazing award tonight. Let us not take this planet for granted. I do not take tonight for granted. Thank you so very much," he concluded.

DiCaprio's speech was given a standing ovation by the star-studded audience at the Dolby Theatre in Los Angeles.

The Revenant, which was nominated for 12 Oscars—more than any other film this year—took home two other awards at Sunday's ceremony, including one for cinematographer Emmanuel Lubezki and director Alejandro G. Iñárritu. The entire cast and crew braved the elements and faced extreme weather conditions in locations such as Mexico, Argentina, British Columbia and Alberta.

DiCaprio, who played fur trapper and legendary frontiersman Hugh Glass in the film, made similar comments at previous awards ceremonies about the The Revenant's grisly filming conditions.

DiCaprio, who is working on a documentary about climate change, told reporters at the SAG awards, "We are in the process of changing our climate for tens of thousands if not millions of years at this very moment, so this is a very significant turning point for me to witness it first-hand while doing this movie and simultaneously doing the documentary, and it’s absolutely, absolutely terrifying.”

As EcoWatch reported, DiCaprio saw the impacts of climate change first hand while traveling to film the documentary. He was “astonished to see that ancient glaciers” in Greenland and the Arctic are “rapidly disappearing well ahead of scientific models.” In India, he saw farmers’ fields devastated by unprecedented flooding. He said we need to keep fossil fuels in the ground, urged business leaders to divest from fossil fuels and pushed for a rapid transition to renewables.

“I had a friend say, ‘Well, if you’re really this passionate about environmentalism, quit acting,'" he said. “But you soon realize that one hand shakes the other, and being an artist gives you a platform. Not that necessarily people will take anything that I say seriously, but it gives you a voice.”

The longtime environmental advocate formed his Leonardo DiCaprio Foundation in 1998 to protect biodiversity and threatened ecosystems. DiCaprio—who urges a “transition to a clean energy economy that does not rely on fossil fuels”—is a United Nations Messenger of Peace and played an active role at the Paris climate talks, urging mayors and governors to “commit to no less than 100 percent renewable energy as soon as possible.”

Last month, DiCaprio and Pope Francis met at Vatican City to have a conversation focused on how they can work together to address the immediate need for major action to stop the devastating impacts of climate change.

"Thank you all so very much. Thank you to the Academy, thank you to all of you in this room. I have to congratulate the other incredible nominees this year. The Revenant was the product of the tireless efforts of an unbelievable cast and crew. First off, to my brother in this endeavor, Mr. Tom Hardy. Tom, your talent on screen can only be surpassed by your friendship off screen… thank you for creating a transcendent cinematic experience. Thank you to everybody at Fox and New Regency ... my entire team. I have to thank everyone from the very onset of my career ... To my parents, none of this would be possible without you. And to my friends, I love you dearly, you know who you are.

"And lastly I just want to say this: Making The Revenant was about man's relationship to the natural world. A world that we collectively felt in 2015 as the hottest year in recorded history. Our production needed to move to the southern tip of this planet just to be able to find snow. Climate change is real, it is happening right now. It is the most urgent threat facing our entire species, and we need to work collectively together and stop procrastinating. We need to support leaders around the world who do not speak for the big polluters, but who speak for all of humanity, for the indigenous people of the world, for the billions and billions of underprivileged people out there who would be most affected by this. For our children’s children, and for those people out there whose voices have been drowned out by the politics of greed. I thank you all for this amazing award tonight. Let us not take this planet for granted. I do not take tonight for granted. Thank you so very much."

Why a Rockefeller Donated $400,000 in Exxon Shares to Nonprofits Fighting Climate Denial