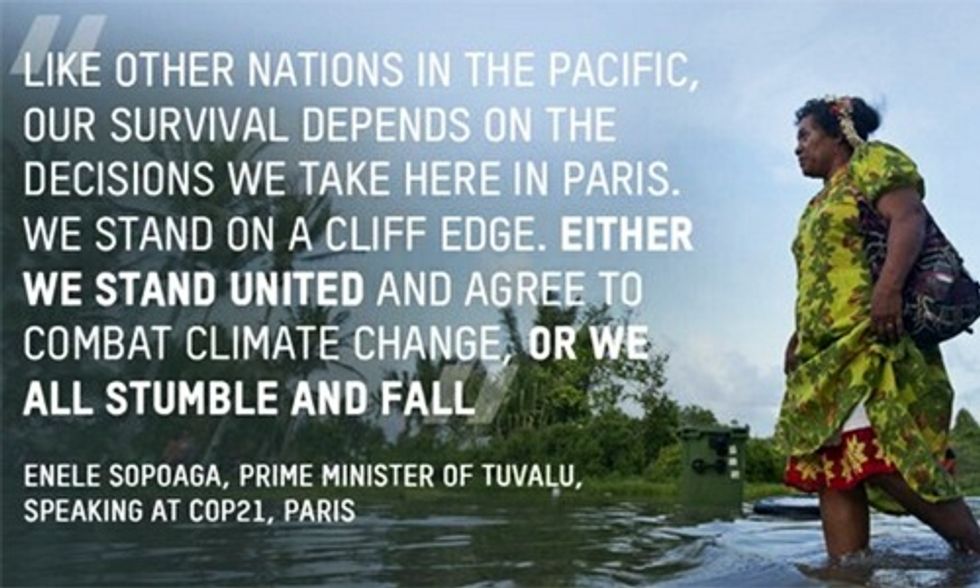 As the high-level Heads of State meeting wrapped up, emerging economies and developing nations took the spotlight at the COP21 Paris climate talks.

The Climate Vulnerable Forum (CVF), representing more than 20 countries around the world most at risk from climate change, backed the inclusion of a goal to transition to 100 percent renewable energy by 2050 in the Paris Agreement. CVF, which includes Afghanistan, Bangladesh and Vietnam, also reaffirmed their commitment to a strict limit on global warming to no more than 1.5C, reminding the rest of the world that millions of people will be affected by the decisions made in Paris. Even more, the pledge demonstrated that poorer countries “aren’t waiting to be rescued.”

CVF’s ambitious stance also garnered them a Ray of the Day, the flipside of the more commonly awarded Fossil of the Day prize, which usually goes out to the countries that “perform the worst” at the climate talks. Instead the Ray awarded to the vulnerable nations lauded them for setting an example and making an ambitious commitment to fighting climate change.

Another highlight of the day was India’s willingness to partner with other nations to boost renewable energy development. Prime Minister Narendra Modi, along with French President Francois Hollande, launched an international solar alliance with more than 120 countries, calling it “the sunrise of new hope.” Most signatory nations hail from the sun-drenched regions of the tropics, but several European countries, including France, have also signed on.

This initiative is the latest and possibly the grandest expression of India’s embrace of clean energy to power its development and that of other developing nations, building on the country's INDC (Intended Nationally Determined Contributions), in which India articulated its vision for decreasing energy poverty by massively scaling up its renewable energy capacity (to 40 percent by 2030) and cutting the carbon-polluting intensity of its emissions. The nation will be investing an initial $30 million with the eventual goal of raising $400 million from membership fees and international agencies.

Africa’s clean energy future is also looking bright, as 54 African nations announced the goal of producing 300 gigawatts of energy from renewable sources by 2030. That would nearly double the current generation capacity (of both clean and mostly non-clean energy) of the entire continent, entirely through renewable sources.