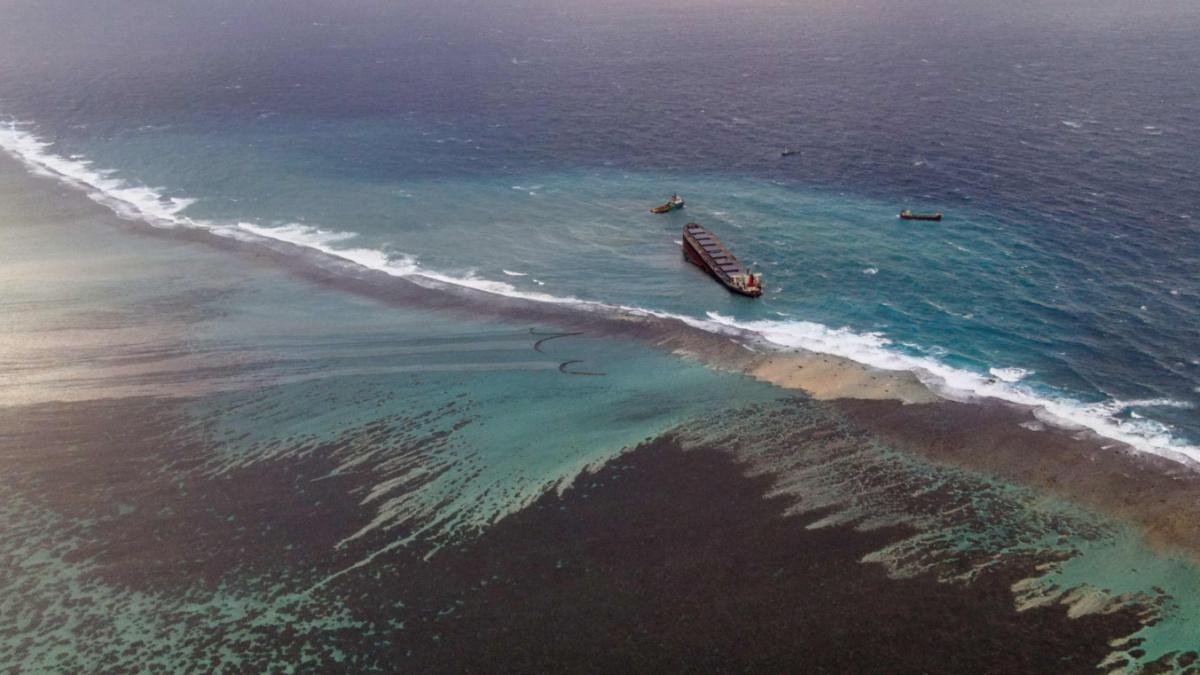 Oil spills, such as the one in Mauritius in August 2020, could soon be among the ecological crimes considered ecocide. - / AFP / Getty Images

An expert panel of top international and environmental lawyers have begun working this month on a legal definition of “ecocide” with the goal of making mass ecological damage an enforceable international crime on par with war crimes, crimes against humanity, and genocide.

Assembled by the Stop Ecocide Foundation at the request of several Swedish parliamentarians, the initiative to criminalize the destruction of ecosystems at the global level has already garnered support from European countries as well as small island nations highly vulnerable to rising sea levels.

The drafting panel is co-chaired by Philippe Sands QC, a professor at University College London, and Justice Florence Mumba, a former judge at the International Criminal Court (ICC).

The November 20 launch date of the project coincided with the 75th anniversary of the beginning of the Nuremberg trials of Nazi leaders, where the terms “crimes against humanity” and “genocide” were coined.

“The time is right,” Sands said recently at an event commemorating the Nuremberg trials, “to harness the power of international criminal law to protect our global environment.”

“Seventy five years ago, ‘crimes against humanity’ and ‘genocide’ were spoken for the first time, in Nuremberg’s Courtroom 600,” Sands added, “and my hope is that this group will be able to draw on experience since that day to forge a definition that is practical, effective, and sustainable, and that might attract support to allow an amendment to the ICC Statute to be made.”

Charles Jalloh, a professor at Florida International University and member of the United Nations International Law Commission who is on the panel drafting a legally robust definition of ecocide, said that “states should use all tools at their disposal, including their criminal law power at the national and international levels, to protect our shared global environment and to bring the most responsible perpetrators to justice.”

Professor Jalloh is a member of the UN International Law Commission & Editor in Chief of the Journal of African Legal Studies & African Journal of International Criminal Justice. Honoured to have @CharlesJalloh on our expert #ecocide law drafting panelhttps://t.co/bbl0ajSbkC pic.twitter.com/hj3RetwN2h

The Stop Ecocide Foundation noted that the concept of criminalizing ecocide “has been steadily gaining traction in recent months since small island states Vanuatu and the Maldives called for ‘serious consideration’ of it at the ICC’s annual assembly” in December 2019. According to the group, French President Emmanuel Macron “has actively promised to champion the idea,” and the Belgian government has also “pledged diplomatic action to support it.”

As The Guardian reported Monday, the ICC “has previously promised to prioritize crimes that result in the ‘destruction of the environment,’ ‘exploitation of natural resources,’ and the ‘illegal dispossession’ of land.”

“An ICC policy paper in 2016 said it was not formally extending its jurisdiction but would assess existing offenses, such as crimes against humanity, in a broader context,” The Guardian continued. Yet “there have been no formal investigations or charges of this type so far.”

Panel member Pablo Fajardo, the Goldman prize-winning Ecuadorian lawyer who challenged Chevron for polluting the Amazon rainforest, said that this “great legal vaccum that exists globally” results in “crimes… committed against nature, against life… go[ing] unpunished,” even though “these crimes take their toll on humanity.”

“We see… systemic, widespread, and deliberate destruction of the environment without any obvious consequences,” said panelist Christina Voigt, a professor at the University of Oslo and expert in climate change law. A newly defined crime of ecocide, she added, “could not only bring those responsible to justice, but also more importantly prevent further destruction.”

As The Guardian pointed out, “one challenge for the drafting panel would be to define at what point an ecocide offense would come into force. Chopping down a single tree on a village green would not be sufficient.”

Jojo Mehta, chair of the Stop Ecocide Foundation, told The Guardian that “it would have to involve mass, systematic, or widespread destruction” of the world’s ecosystems.

“We are probably talking about Amazon deforestation on a huge scale, deep sea bottom trawling, or oil spills,” she said. “We want to place it at the same level as atrocities investigated by the ICC.”

Mehta explained that “in most cases ecocide is likely to be a corporate crime.”

“Criminalizing something at the ICC means that nations that have ratified it have to incorporate it into their own national legislation,” she added. “That means there would be lots of options for prosecuting [offending corporations] around the world.”

Preparatory work is now underway, and the panel plans to deliver a draft of a legally enforceable definition of ecocide in early 2021.