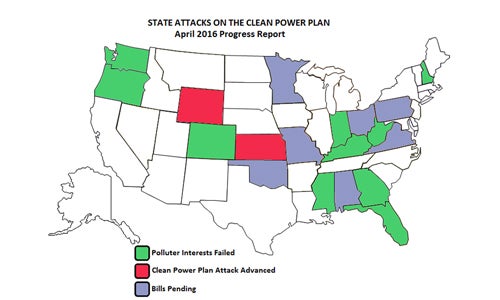 An alphabet soup of polluter-funded groups is taking credit for the latest state legislative push against climate action. The groups, including the American Legislative Exchange Council (ALEC), the American Energy Alliance (AEA) and the State Policy Network (SPN), all receive funding from the Koch brothers and their goal is to stymie the Clean Power Plan (CPP), President Obama’s signature effort to cut carbon pollution from power plants.

The good news is that, so far, polluter interests are not yielding much return on their investment from the money and these front groups they’ve injected into state capitols. 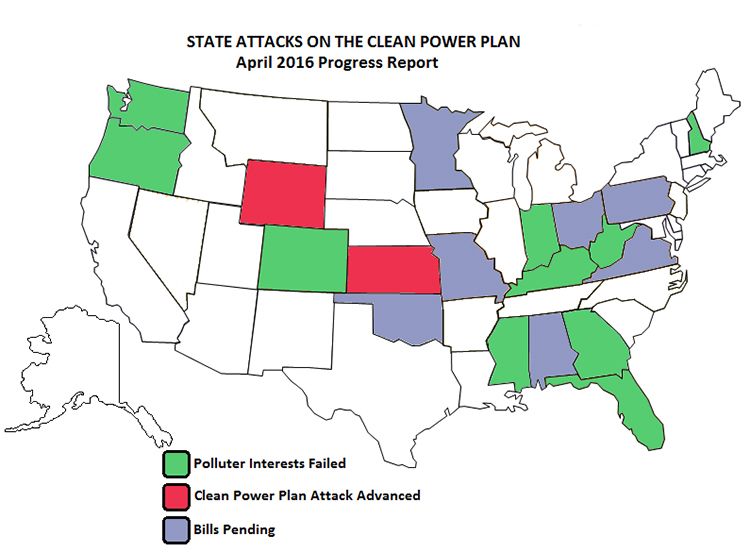 Of the 50 state bills introduced this year to obstruct the CPP, 56 percent already have died. Another 34 percent of those bills are languishing and we expect most of them to expire when state legislatures adjourn. Polluter interests lost ground in West Virginia, whose legislature passed a bill that improves its ability to act on the Clean Power Plan. The Koch brothers did score a recent victory in their home state of Kansas to stop the state’s work on the CPP, but it’s not a huge loss because the state had already suspended the process anyway. Additionally, the wind industry in Kansas still plans to expand generation despite Clean Power Plan setbacks, because the state has incredible wind energy resources.

The Clean Power Plan is on a solid legal foundation and is likely to be upheld. The stay issued by the Supreme Court only hits the pause button on CPP implementation deadlines and has no bearing on the legal merits of the case. Many governors want to use this extra time wisely to develop the best possible pathway to reduce carbon pollution, so they can hit the ground running when the CPP deadlines are reinstated. Governors generally want to preserve the freedom and flexibility to act in the best interests of their state and these polluter-linked state legislative maneuvers would undermine those best interests. The legislative schemes range from requiring excessive legislative approval for a governor’s plan to Environmental Protection Agency, to mandating a work stoppage for CPP planning.

The Koch groups have been targeting state budgets as a vehicle to protect polluter interests, with limited success. In Colorado, the budget language does not include restrictions to planning for the Clean Power Plan—it only modestly cut the air agency budget (a vast improvement from the initial proposal to defund the entire agency). In Virginia, the budget rider restricting funds for Clean Power Plan work can be interpreted narrowly and Gov. McAuliffe wants to continue with development of a state Clean Power Plan. Gov. McAuliffe views the Clean Power Plan as “a necessary response to climate change and an opportunity for Virginia to become a leader in clean energy.” And, between you and me, I already had low expectations for Wyoming even before the legislature defunded the state’s Clean Power Plan process and I was pleasantly surprised when Wyoming leaders called for continued progress despite the budget restriction. In addition, just a few weeks ago, coal mining and utility executives in Wyoming reinforced this sentiment that the state needs to start planning for carbon reductions.

Outside of state budgets, polluters are also pushing stand-alone bills to restrict the Clean Power Plan progress in states:

While many legislatures already have adjourned, some are still in session so a few bills could be in play. We will continue monitoring statehouses for developments, but so far it seems that the Koch brothers and polluter interests are not getting their money’s worth in legislatures.