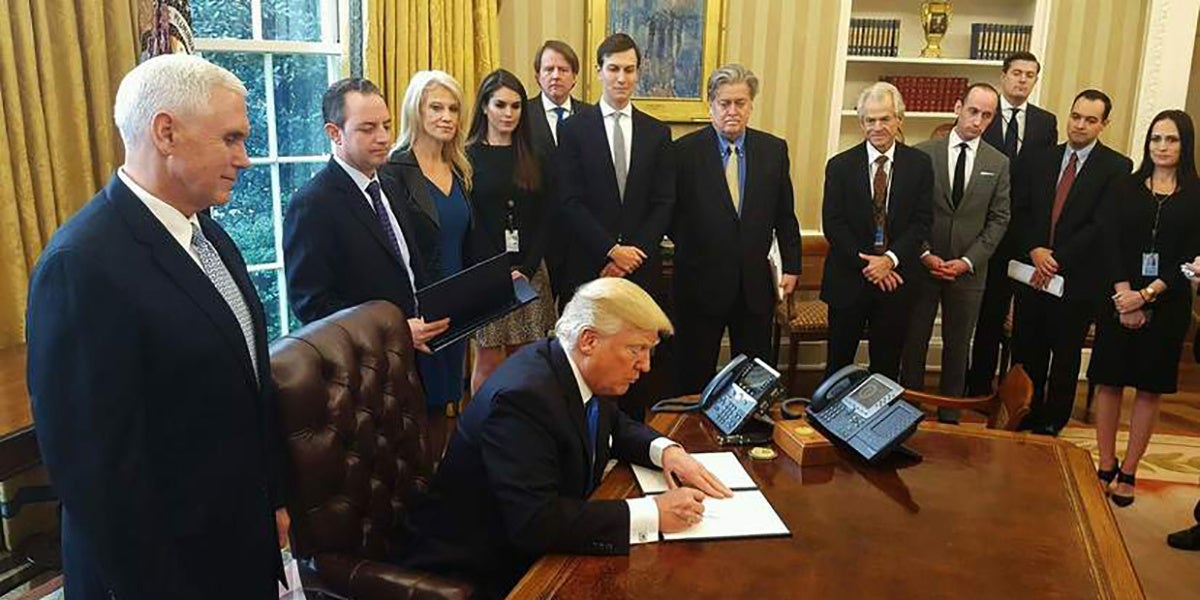 At a Feb. 21 hearing, a U.S. District Court judge ruled that the Trump administration must either fork over documents showing how the U.S. Department of State reversed an earlier decision and ultimately came to approve the Keystone XL pipeline, or else provide a substantial legal reason for continuing to withhold them. The federal government has an order to deliver the goods, one way or the other, by March 21.

DeSmog has reviewed the court evidence from the environmental groups bringing the case, records which help illuminate their argument that the government is, in fact, withholding such documents. The judge will decide if those documents, legally, should be made public.

The case, which began in March 2017, pits the Indigenous Environmental Network and the North Coast River Alliance against the State Department, U.S. Fish and Wildlife Service, the U.S. Department of interior and TransCanada, the owner of Keystone XL. During his first week in office, Donald Trump signed a memorandum calling for the State Department to perform an expedited 60-day permit review of the pipeline. Two months later, the State Department gave Keystone XL the permit it needed to cross the U.S.-Canada border.

Under the Obama administration, the Keystone XL pipeline, which would carry oil from Alberta’s tar sands, underwent a years-long environmental review process which culminated in President Barack Obama nixing it in November 2015. For the better part of the past decade, the pipeline has served as a central mobilizing force for the environmental movement.

At the center of this case is a dispute over the administrative records of federal agencies, which in other lawsuits are routinely made public as part of the pre-trial process.

Generally, releasing such documents gives a snapshot of the full deliberative process behind federal agencies’ decisions. DeSmog, in fact, published a story on such documents in 2015 related to a different tar sands pipeline project, which involved Enbridge’s Alberta Clipper (also known as Line 67), part of a broader pipeline system DeSmog calls the “Keystone XLClone.”

In the TransCanada case, the State Department has argued for keeping these pre-trial records sealed while the plaintiffs, the environmental groups, have argued they should be made public. These documents, which might include emails and memos, would offer the plaintiffs and the general public an idea of how the Trump administration decided to approve the Keystone XL.

The plaintiffs say that not all of those records have been turned over.

“Federal Defendants have wrongly omitted an unknown number of emails and other internal communications considered by the agencies during their review of the Keystone XL pipeline,” the plaintiffs in the case argued in court documents on Jan. 8.

In an affidavit exhibited as part of that filing, Cecilia Segal, an attorney for one of the plaintiffs, cited a Dec. 19 phone call she had with the federal defendants, in which they said that agency emails and other records do not need to be disclosed as part of the case.

Another letter exhibited as part of the Jan. 8 filing, written on Nov. 30 by attorneys for the Center for Biological Diversity, further complained that the documents already handed over were not adequately comprehensive or organized in a manner useful for the case. And many documents, they allege, seem to be missing entirely and without explanation.

“We are concerned that both the State Department and Service have withheld records as privileged without identifying and certifying them on a privilege log,” wrote the attorneys.

“The State Department Administrative Record includes very few emails and inter-agency communications, even though such materials are typically included in administrative records that are compiled for litigation by federal agencies. Yet the State Department has provided no descriptions of these records, or even acknowledged the existence of these and other records that have been withheld in their entirety, let alone provided a log with basic details about what these records are, who generated them, and why the State Department is evidently hoping to shield them from judicial review.”

A privilege log is a document, submitted to a judge and made part of the court record, which details both the nature of documents pertinent to a case and a legal rationale for keeping them out of the public court record.

“Because they have refused to provide a privilege log, it is impossible for Plaintiffs and the Court to determine how extensive the withholdings are and whether they are appropriate,” wrote the plaintiffs in their Jan. 8 filing. “Accordingly, the Court should order Federal Defendants to produce a privilege log that adequately describes the withheld materials, identifies the basis for their withholding, and substantiates any claimed privileges.”

The State Department and TransCanada, for their part, have come to a different legal conclusion, saying that the documents in question are “deliberative” in nature and not part of any official administrative process. They argue that the plaintiffs are attempting to turn the administrative records into a Freedom of Information Act request, positing that pre-decisional documents should not be included among those disclosed in the case.

“The bare fact that predecisional, deliberative materials were generated during the decisionmaking processes, does not transform those materials into documents that were before the decisionmaker in any relevant sense and therefore part of the administrative record, any more than documents reflecting a trial court’s predecisional deliberations, such as bench memos, other communications between judges and their staff, and drafts of decisions, are part of the trial record,” wrote Department of Justice attorneys in a Jan. 22 court filing.

They also argued in that filing that the plaintiffs are on a “fishing expedition” styled as a mission to “complete the record.” Ultimately, it will be for Judge Brian Morris to decide which argument has more merit in the coming months.

At least one group believes the entire premise of the dispute amounts to a cause for celebration. The climate advocacy organization 350.org—which has long led the movement opposing Keystone XL—says it believes this development is a sign the pipeline may never be built. Along those lines, it showed excitement over the judge’s decision in a press release:

“The Trump administration’s approval of the Keystone XL pipeline has been nothing but smoke and mirrors,” said 350.org Executive Director May Boeve. “The truth is undeniable. Every shred of scientific evidence shows this pipeline is a threat to our climate, and to the lands, waters, and lives in its path.”