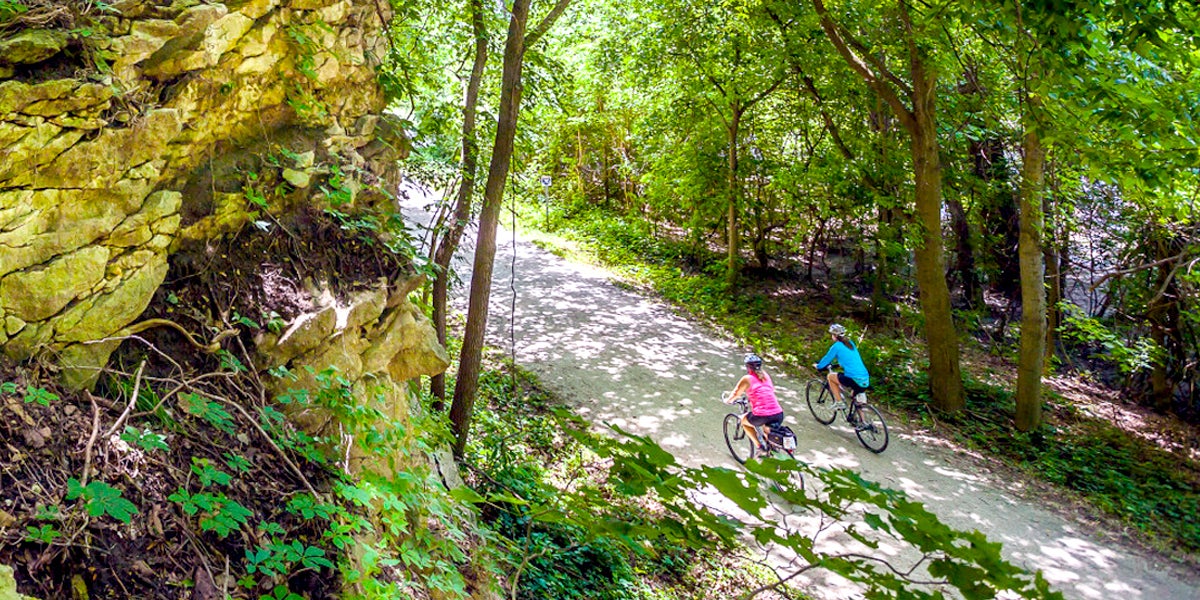 You can now walk or cycle across most of the state of Missouri. Gov. Jay Nixon has opened a 47.5-mile extension to the Katy Trail, effectively creating one continuous hike-and-bike path from the St. Louis area to the outskirts of Kansas City.

“You’ll be able to go 287 miles on an incredible asset,” Nixon told the Kansas City Star at the ribbon-cutting on Dec. 10 in Pleasant Hill, a suburb just south of Kansas City.

According to the governor’s office, the new section of the trail follows the corridor of the old Rock Island Railroad for 47.5 miles from Pleasant Hill to Windsor, where a junction connects to the rest of the Katy Trail State Park.

We are only 8 days away from the big event in Pleasant Hill: linking #KC to #STL with extension of #KatyTrail. Get your bikes ready! #KT2KC pic.twitter.com/eA6pYpDjYv

At 287 miles, the Katy Trail is now officially the nation’s longest rails-to-trails project, besting the 253-mile John Wayne Pioneer Trail in Washington state. Rail-trails are ideal because it converts unused or abandoned rail corridors into recreational areas for the public. The Katy Trail sits on the former Missouri–Kansas–Texas Railroad.

Tyler Month, vice-president of the Pleasant Hill Chamber of Commerce, told radio station KCUR that the new stretch of the Katy Trail acts like a bridge to smaller communities.

“We’re off the beaten path as far as highways go,” Month said, “so this attracts a different group of organizations and individuals to our town that would not have otherwise come here.”

The scenic and mostly flat trail follows Lewis and Clark’s path along the Missouri River. The nearly 300-mile, uninterrupted trail features plenty of nature, Missouri River bluffs and picturesque communities along the way. Horseback riding is also allowed on a 35-mile section of the trail, from Sedalia to Clinton.

The extension took the Missouri Department of Natural Resources seven years to construct at a cost of $15.5 million, KCUR reported.

Plans are underway to extend the trail even further. Imagine someone biking from Jackson County on the state’s western border all the way to the iconic Gateway Arch on the eastern border.

Nixon said the trail is “eerily close” to reaching that goal.