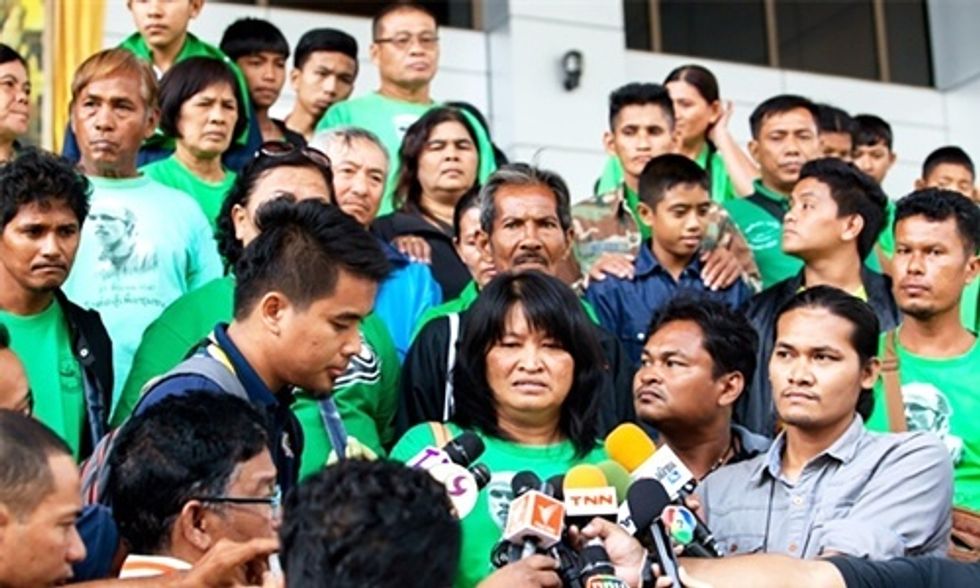 The recent Thai Supreme Court acquittal of three men who masterminded the murder of environmental activist Charoen Wat-aksorn, shows a skewed justice system that puts capitalism in front of community. But this is not the only case of the forced silence of environmentalists.

On June 21, 2004, Charoen Wat-aksorn, a 37-year-old pineapple farmer from Bo Nok village in Prachuap Khiri Khan province, some 240 km [150 miles] south of Bangkok, was returning by bus to his hometown. He had just been in the capital to testify before a parliamentary anti-corruption panel as to how local politicians were colluding with business figures to conduct illegal land grabs.

Charoen Wat-aksorn being interviewed as part of a documentary by Greenpeace (2002). Photo credit: Yvan Cohen / Greenpeace

As the leading opponent of coal-fired power plant projects in his province, Charoen was a thorn in the side of companies who wanted to raze land and kick out communities. For a decade he fought, fended off bribes, survived multiple threats and mobilized tens of thousands of villagers to lead blockades. In 2002, bowing to pressure, the Thaksin government announced they would postpone plans, eventually scrapping the coal power plant projects in Bo Nok and in neighboring village, Ban Krut.

But on that day in June as Charoen alighted from the Bo Nok bus station after simply standing up for what he believed in, he was shot.

The two accused gunmen, Saneh Lekluan and Prachuab Hinkaew, who confessed to the assassination, mysteriously died in 2006 just before they were due to testify, though any formal proof of their cause of death was not presented.

In 2008, Thanu Hinkaew, a 53-year-old lawyer, was convicted and sentenced to death. His sibling, Manote Hinkaew, 49, a former provincial councillor, and their father Juea Hinkaew, 78, a former head of a Bo Nok sub-district where a coal-fired power plant was planned, were acquitted.

But over a lengthy appeals process, on Oct. 13, the Supreme Court delivered the final verdict. Due to lack of evidence, the ruling was upheld and all three men were acquitted.

"For the past 11 years following the case of Charoen Wat-aksorn's murder, we have realized that the Thai justice system is incapable of prosecuting the perpetrators and victims can hardly expect any protection," said his wife Korn-uma Pongnoi.

Charoen, like other activists, has risked all to protect his community and the environment. According to a 2014 Global Witness report, "on average two people are killed every week defending their land, forests and waterways against the expansion of large-scale agriculture, dams, mining, logging and other threats." Between 2002 and 2013, 16 Thai environmentalists were murdered.

But for these dedicated activists, the dangers of coal are worth fighting for. Two recent reports from Greenpeace show that in Indonesia, existing coal plants cause an estimated 7,100 premature deaths every year; and in Vietnam, an estimated 4,300 premature deaths. A similar coal report from Thailand is currently being researched.

Non-violence is a core value of Greenpeace. Across the world, from Indonesia, Poland, Australia, Hong Kong and many other countries, activists have staged protests to end the destruction of coal mines on health and the environment. The age of coal is over, and we call for the use of renewable energy as a clean, green alternative to unsustainable and dangerous fossil fuels.

At the Supreme Court hearing in front of more than 100 Bo Nok villagers who gathered to hear the final decision, all wearing green t-shirts screen-printed with the slain activist's image, Korn-uma declared:

"Thailand's skewed justice system must be promptly reformed from the investigation process to the judicial process at all levels to make them transparent, or else wicked people will be scot-free while innocent people are detained."

This is unconscionable. We stand with the brave activists in Thailand—and around the world—who are fighting for a green and peaceful world.