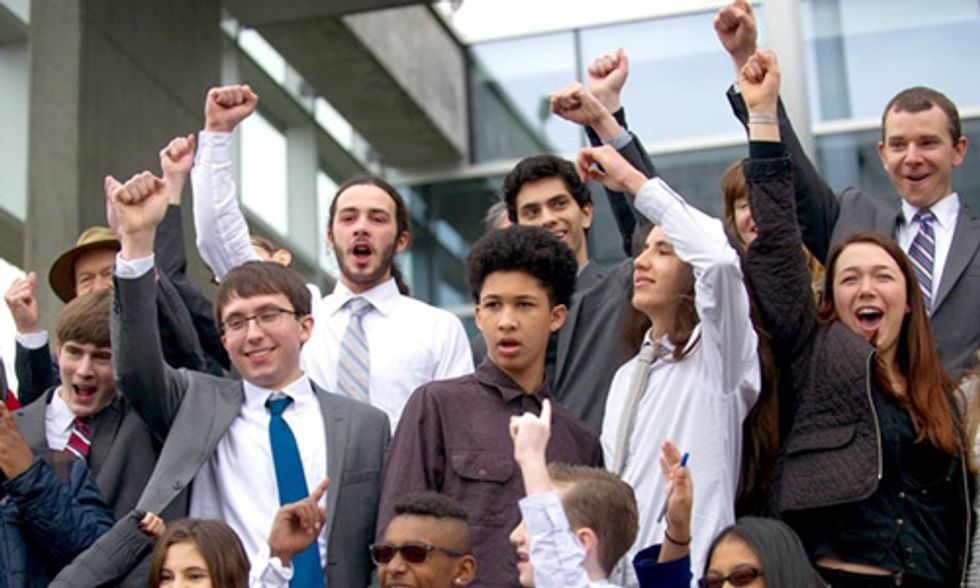 U.S. Magistrate Judge Thomas Coffin of the Federal District Court in Eugene, Oregon, decided in favor of 21 young plaintiffs in their landmark constitutional climate change case against the federal government. Judge Coffin ruled Friday against the motion to dismiss brought by the fossil fuel industry and federal government.

The court's ruling is a major victory for the 21 youth plaintiffs, ages 8-19, from across the U.S. in what Bill McKibben and Naomi Klein call the “most important lawsuit on the planet right now."

The youth plaintiffs after the hearing on March 9 in Eugene, Oregon. Photo credit: Our Children's Trust

These plaintiffs sued the federal government for violating their constitutional rights to life, liberty and property, and their right to essential public trust resources, by permitting, encouraging and otherwise enabling continued exploitation, production and combustion of fossil fuels.

“This decision is one of the most significant in our nation's history," plaintiffs' attorney Philip Gregory said.

"The court upheld our claims that the federal government intensified the danger to our plaintiffs' lives, liberty and property. Judge Coffin decided our complaint will move forward and put climate science squarely in front of the federal courts. The next step is for the court to order our government to cease jeopardizing the climate system for present and future generations. The court gave America's youth a fair opportunity to be heard."

As part of Friday's historic decision, Judge Coffin characterized the case as an “unprecedented lawsuit" addressing “government action and inaction" resulting “in carbon pollution of the atmosphere, climate destabilization and ocean acidification."

In deciding the case will proceed, Judge Coffin wrote:

“The debate about climate change and its impact has been before various political bodies for some time now. Plaintiffs give this debate justiciability by asserting harms that befall or will befall them personally and to a greater extent than older segments of society. It may be that eventually the alleged harms, assuming the correctness of plaintiffs' analysis of the impacts of global climate change, will befall all of us. But the intractability of the debates before Congress and state legislatures and the alleged valuing of short term economic interest despite the cost to human life, necessitates a need for the courts to evaluate the constitutional parameters of the action or inaction taken by the government. This is especially true when such harms have an alleged disparate impact on a discrete class of society."

“This decision marks a tipping point on the scales of justice," Kelsey Juliana, one of the youth plaintiffs from Eugene, said. "Youth voices are uniting around the world to demand that government uphold our constitutional rights and protect the planet for our and future generations' survivability. This will be the trial of the century that will determine if we have a right to a livable future, or if corporate power will continue to deny our rights for the sake of their own wealth."

The court rejected the courtroom arguments of the federal government and fossil fuel industry that Congress could sell the coastal sea waters of the U.S. to Exxon. Instead, the court found that the federal government is subject to the public trust doctrine and that “such a sweeping and profound effect" as suggested by the defendants is not consistent with U.S. Supreme Court jurisprudence. In January 2016, defendant status was granted to three fossil fuel industry trade associations, representing nearly all of the world's largest fossil fuel companies, who called the case “extraordinary" and “a direct, substantial threat to [their] businesses."

The decision denied motions seeking to dismiss the youth's climate change lawsuit. The motions were brought by the federal government and the fossil fuel industry who denied any duty under the constitution or the public trust doctrine to protect essential natural resources, such as air and oceans, for the benefit of all present and future generations.

“Science clearly establishes that our planet's increasing energy imbalance—caused in substantial part by our government's support for the exploitation and combustion of fossil fuel—imposes increasingly severe risks on our common future," Dr. James Hansen, guardian in the case for all future generations and world-renowned climate scientist, said.

"Now, from Eugene Oregon, comes a prescient and insightful ruling from a federal district court. Judge Coffin in effect declares that the voice of children and future generations, supported by the relevant science, must be heard. We will now proceed to prove our claims. It is perhaps not too late for serious action to preserve a viable climate system that will be required by our posterity."

The court heard oral arguments from attorneys for two hours on March 9, before hundreds of people supporting the youth, while hundreds more waited in lines to enter the courthouse. In an unprecedented move, oral argument was streamed via video feed into three additional courtrooms in Eugene, Oregon and one in Portland.

In denying the motions of the federal government and the fossil fuel industry, the court's decision framed the issue as follows:

“Plaintiffs are suing the United States … because the government has known for decades that carbon dioxide (C02) pollution has been causing catastrophic climate change and has failed to take necessary action to curtail fossil fuel emissions. Moreover, plaintiffs allege that the government and its agencies have taken action or failed to take action that has resulted in increased carbon pollution through fossil fuel extraction, production, consumption, transportation, and exportation. Plaintiffs allege the current actions and omissions of defendants make it extremely difficult for plaintiffs to protect their vital natural systems and a livable world. Plaintiffs assert the actions and omissions of defendants that increased C02 emissions 'shock the conscience,' and are infringing the plaintiffs' right to life and liberty in violation of their substantive due process rights."

The court's decision also upheld the youth plaintiffs' claims in the Fifth and Ninth Amendments “by denying them protections afforded to previous generations and by favoring short term economic interests of certain citizens." Judge Coffin upheld plaintiffs' assertion of violations under the public trust doctrine, ruling that there is a federal public trust and plaintiffs' claim can proceed.

“Judge Coffin accepted the complaint's presentation of undisputed scientific evidence that the federal government has, and continues to, damage these young plaintiffs' personal security and other fundamental rights," Julia Olson, counsel for the plaintiffs and executive director of Our Children's Trust, said. "Unlike almost every other case deciding constitutional rights throughout history, the climate rights that will now be decided in this case, cannot be vindicated by future generations."

This case alleges the federal government is violating plaintiffs' constitutional and public trust rights by promoting the development and use of fossil fuels. The complaint explains that, for more than 50 years, the U.S. Government has known that carbon dioxide (CO2) pollution from burning fossil fuels causes global warming and dangerous climate change, and that continuing to burn fossil fuels destabilizes the climate system. The next step is a review of Judge Coffin's decision by another judge in the same court, Judge Ann Aiken.

“When those in power stand alongside the very industries that threaten the future of my generation instead of standing with the people, it is a reminder that they are not our leaders," Xiuhtezcatl Tonatiuh Martinez, one of the youth plaintiffs and youth director of Earth Guardians, said.

"The real leaders are the twenty youth standing with me in court to demand justice for my generation and justice for all youth. We will not be silent, we will not go unnoticed, and we are ready to stand to protect everything our "leaders" have failed to fight for. They are afraid of the power we have to create change. And this change we are creating, will go down in history."