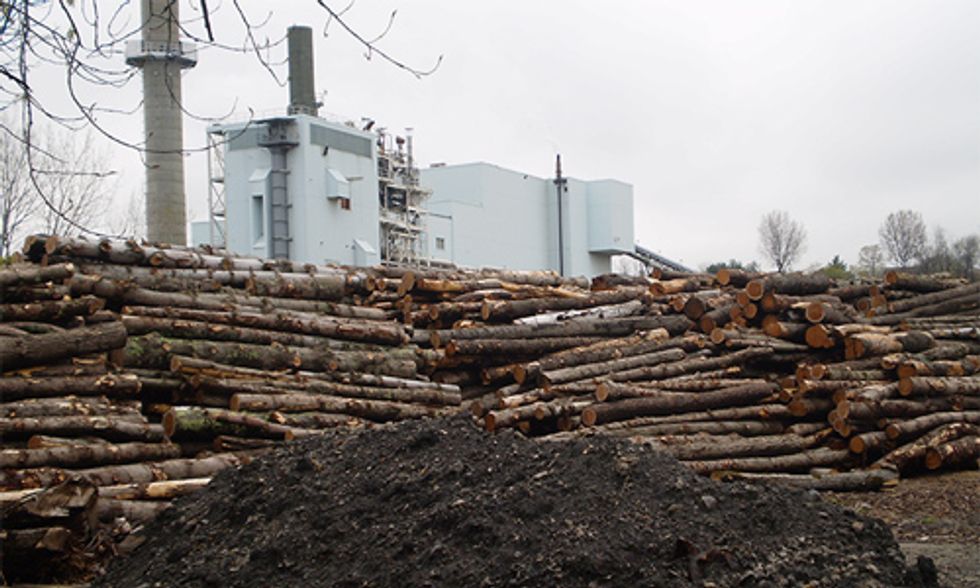 Wood Burning, Biomass, Air Pollution and Climate Change, by Christopher D. Ahlers, adjunct professor of Law at Vermont Law School, explains that the term renewable is a “subjective policy judgment" that must take into account the health and environmental impacts of a given energy source.

Chipping trees for biomass energy at the Arapaho National Forest in Colorado.

Currently, biomass energy makes up 50 percent of renewable energy in the U.S., according to the U.S. Energy Information Administration, with half of that tally coming from wood products.

Ahlers, legal support for the Philadelphia-based Clean Air Council, contrasts biomass energy from solar and wind and instead compares bioenergy to fossil fuels, as “both involve the extraction of solid material from the Earth, for the purpose of combustion." He also discusses the time difference between growing a new tree (decades to centuries) and the formation of new fossil fuel deposits (millennia).

The idea of separately accounting for the carbon emissions of fossil fuels and bioenergy—biogenic carbon—is “ambiguous," according to the report, which references the U.S. Environmental Protection Agency's (EPA) ongoing “uncertainty" on the topic.

While wood gradually emits carbon dioxide as it decomposes in the forest, Ahlers points out that wood burned in a biomass facility releases the CO2 in one immediate pulse. Still, he notes the issue involves a “complex factual question" that climate scientists have “wrestled with."

Biomass101, a coalition of organizations representing the forest products industry, agrees that accounting for bioenergy carbon emissions is complicated. In an email to The Biomass Monitor, a representative writes that biomass energy is “part of a complex process of carbon capture, storage and emission that carries on much the same whether trees become forest bioenergy or are lost to insects, disease, storm damage, wildfires and the like."

The organization contends that “biomass is carbon neutral where American forests are capturing as much or more carbon as energy production is emitting and where sustainable forest management is reinforcing that dynamic."

The EPA and proponents of biomass energy have distracted attention away from its public health impacts by “framing the issue of biomass around climate," writes report author Christopher Ahlers, in an email exchange with The Biomass Monitor. Ignoring air pollution, he said, has resulted in “limiting the engagement of environmental groups," many of which are either tangentially involved with the issue or not at all.

All forms of combustion, including biomass, emit nitrogen oxides and fine particulates, along with hazardous air pollutants (formaldehyde, benzene, toluene), mercury and other chemicals. The EPA has linked nitrogen oxides to respiratory problems and when it comes to particulate matter, the agency has “not identified a threshold below which there are no adverse effects on human health."

Therefore, the report concludes that biomass energy “contributes to the formation of the country's two most significant air pollution problems."

Because of its air emissions, biomass is “more similar to coal, oil and natural gas (non- renewable energy), than it is to wind and solar power."Ahlers determines that “many people have erroneously become fixated on biomass, even though it presents harm to public health."

The report also tackles the issue of residential wood burning, including wood stoves and fireplaces.

New England is a hot bed of wood heating, with Vermont, New Hampshire and Maine ranked first, fourth, fifth in per capita air emissions from wood burning. The report notes a “broader pattern of elevated asthma levels" in these states.

Because of what he calls a “cultural affinity for wood burning," when it comes to wood stoves, some states are “refusing to enforce more stringent standards for the protection of public health."

Outside of the U.S., burning wood and biomass for cooking and heating is responsible for “millions of annual deaths from household air pollution in developing countries."

According to Biomass101, the fact that trees cut for bioenergy eventually grow back means the energy source is “inherently renewable."

However, Clean Air Council believes the expansion of biomass energy is less a science-based decision and more the “result of political and cultural choices being made by both consumers and corporations."

Ahlers makes the point that nuclear energy could theoretically be considered renewable, because of its lack of direct air emissions and the fact that uranium isn't a fossil fuel, however it's been denied the label mostly because of its health and environmental impacts.

The report concludes that the same restrictions applied to nuclear power should be applied to biomass energy, “due to the health and environmental impacts in the form of fine particulates and harvesting of trees."

Josh Schlossberg is the editor-in-chief of The Biomass Monitor.