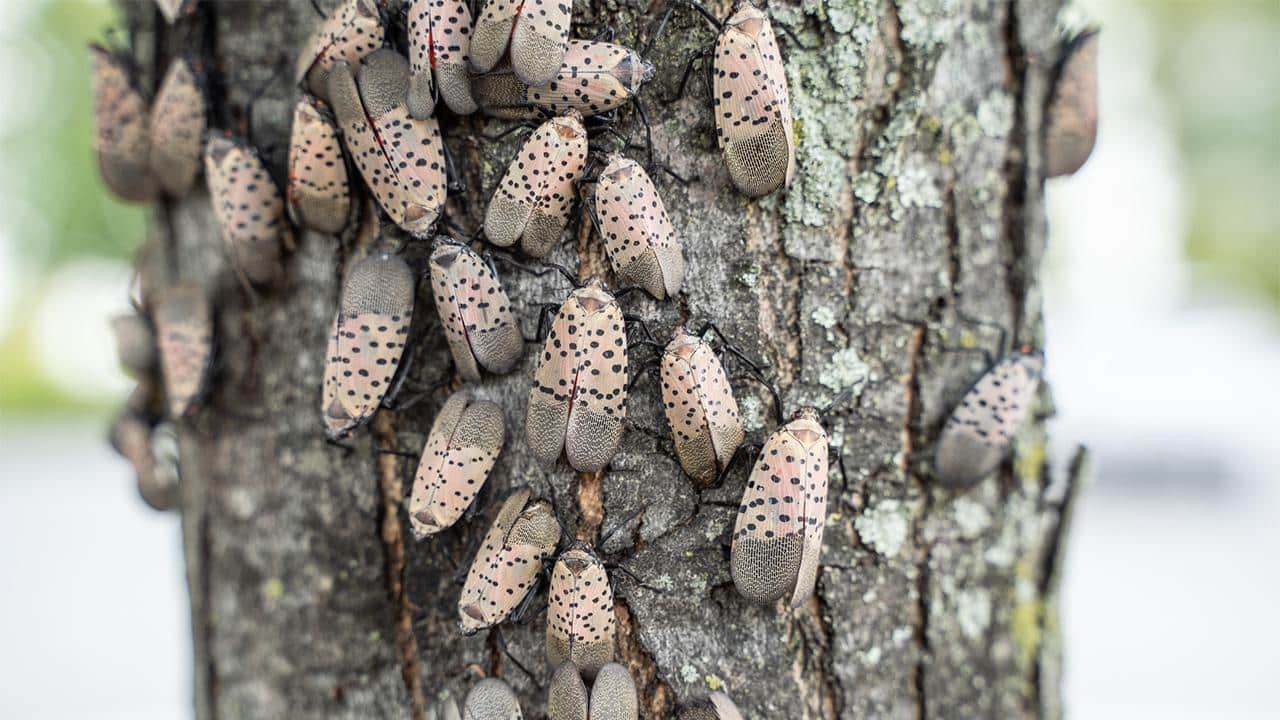 By Frank A. Hale

The spotted lanternfly was first detected in Pennsylvania in 2014 and has since spread to 26 counties in that state and at least six other eastern states. It’s moving into southern New England, Ohio and Indiana. This approximately 1-inch-long species from Asia has attractive polka-dotted front wings but can infest and kill trees and plants. We recently caught up with Professor Frank Hale, an entomologist who is tracking this species.

The Conversation: How did the spotted lanternfly get to the U.S., and how quickly is it spreading?

Frank Hale: It is native to India, China and Vietnam and probably arrived in a cut stone shipment in 2012. The first sighting was in 2014 in Berks County, Pennsylvania, on a tree of heaven — a common invasive tree brought to North America from China in the late 1700s.

By July 2021 the lanternfly had spread to about half of Pennsylvania, large areas of New Jersey, parts of New York state, Maryland, Delaware and Virginia. It also had been found in western Connecticut, eastern Ohio, and now Indiana. To give an idea of how fast these lanternflies spread, they were introduced into South Korea in 2004 and spread throughout that entire country – which is approximately the size of Pennsylvania – in only three years. 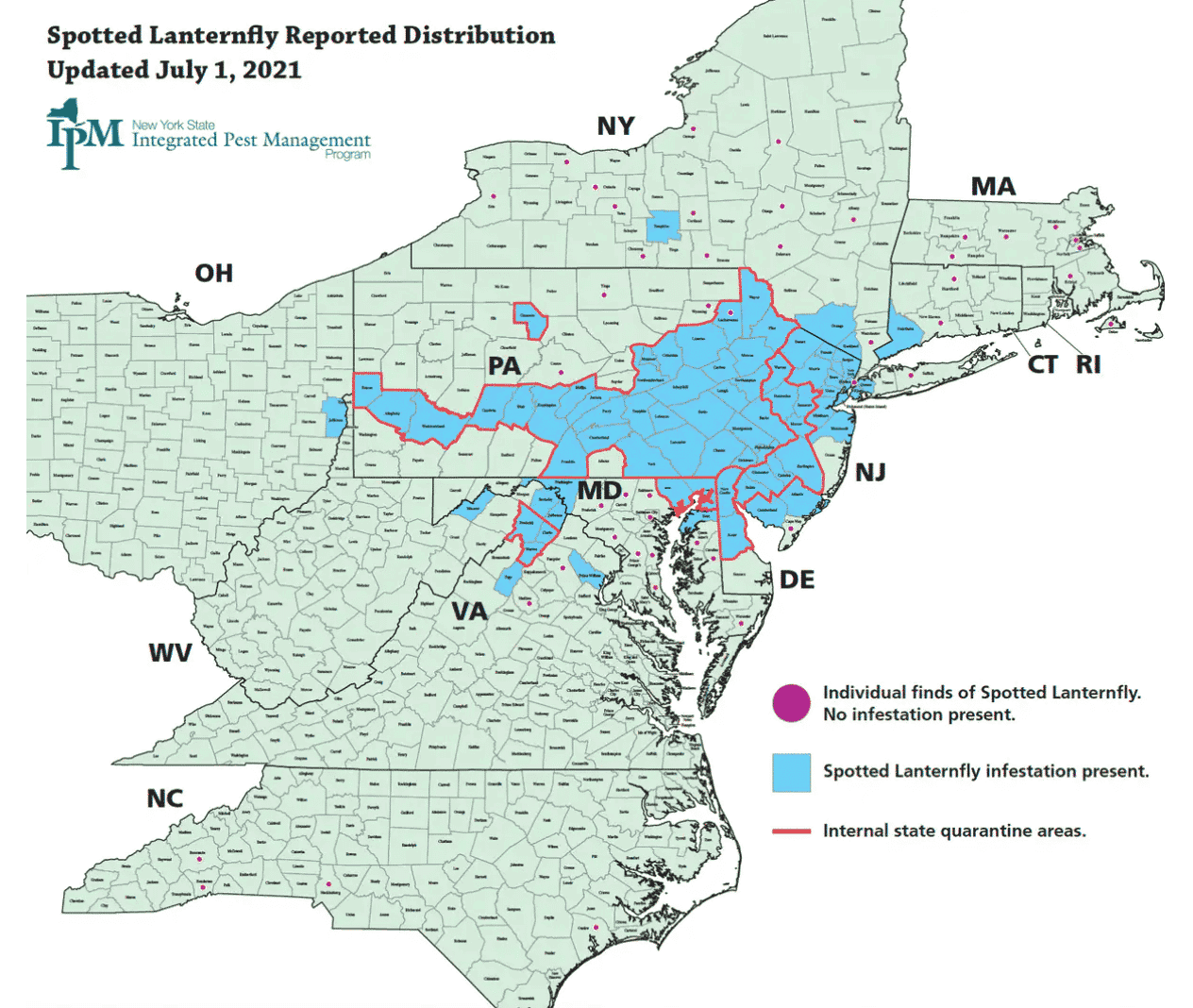 In only seven years, the spotted lanternfly has infested large areas of the Middle Atlantic and has begun to push into Connecticut. New York State Integrated Pest Management Program

TC: How do they spread so fast?

FH: The lanternflies lay egg masses in late summer and autumn on the trunks of trees and any smooth-surfaced item sitting outdoors. The egg masses, which resemble smears of dry mud, can also be laid on the smooth surfaces of cars, trucks and trains. Then, they can be unintentionally transported to any part of the country in just a few days. Once the eggs hatch, they crawl to nearby host plants to start a new infestation.

TC: How do they damage trees and plants? What do they feed on?

FH: They feed by piercing the bark of trees and vines to tap into the plant’s vascular system to feast on sap. For a sucking insect, lanternflies are relatively big. They remove large amounts of sap and excrete copious amounts of clear, sticky “honeydew” that can coat the tree and anything beneath. A black sooty mold grows wherever the honeydew has been deposited. While unsightly, sooty mold isn’t harmful when growing on the bark of the tree or beneath it. Lanternfly feeding seriously stresses trees and vines, which lose carbohydrates and other nutrients meant for storage in the roots and eventually for new growth. Infested trees and vines grow more slowly, exhibit dieback – begin to die from the branch tips – and can even die.

TC: How are scientists and officials trying to stop their spread?

FH: Biological control shows some promise for the future. Two naturally occurring fungal pathogens of spotted lanternflies have been identified in the U.S. Also, U.S. labs are testing two parasitoid insects – insects that grow by feeding on lanternflies and killing them in the process – that have been brought from China for testing and possible future release.

TC: How worried should people be about this lanternfly?

FH: Very worried. Lanternflies easily build to high numbers. The area where host trees live is relatively wide, and lanternflies damage crops, the forest and the landscape. They damage many plants and cause a major nuisance to the general public. The heavy flow of honeydew and the resulting sooty mold makes a mess of the landscape. The adults start to aggregate on plants and structures to lay their egg masses in September. Their sudden, mass appearance can be alarming to people the way periodical cicada populations shock people when they come out of the ground. But lanternflies are more shocking because the few predators that could feed on them, like wheel bugs and predatory stink bugs, do not seem to control the infestations. That is why the introduction of parasitoids from Asia are important for achieving some meaningful level of biological control.

Lanternflies can be a serious pest of grapes, and where found, they have reduced grape yields and damaged or killed vines. Multiple applications of insecticides are often needed to kill them, but this increases the cost of crop production. The pest threatens the major wine-producing regions in the East, such as the Finger Lakes and Long Island in New York; parts of Virginia; and Newport, Rhode Island.

TC: Have any other pests similarly damaged trees?

FH: Yes, the emerald ash borer, which arrived in the U.S. from China by accident and was discovered in 2002. It has killed millions of ash trees in North America. The Asian longhorned beetle, which feeds on and kills many species of trees, has turned up in multiple locations, most recently near Charleston, South Carolina. Maple, buckeye, horse chestnut, willow and elm would be threatened if this pest ever got widely established.

The box tree moth damages boxwoods and is known to live in Canada. It has been seen in Connecticut, Michigan and South Carolina. It possibly was spread accidentally into the U.S. in shipments of boxwoods from Canada. It is not known to be established in any state, but a federal government order has halted importing host plants like boxwood, euonymus and holly from Canada.

TC: What should I do if I see one?

FH: If it has already infested the region where you live and you find spotted lanternflies on your property, contact your local county extension office for control recommendations.

But if it has not been found in your county or state, report it to your state department of agriculture. If the infestation is caught early before it can become established in your area, hopefully it can be eradicated there. Eventually, it will spread to many parts of the country. We can slow the spread by identifying and eradicating new infestations wherever they arise.

Frank A. Hale is a Professor of Horticultural Crop Entomology at the University of Tennessee.

Disclosure statement: Frank A. Hale as a representative for the University of Tennessee Institute of Agriculture (UTIA) receives funding from USDA APHIS PPQ. In 2020, UTIA received funding to survey for spotted lanternfly and other pests and diseases of grapes at Tennessee vineyards. I was a PI on that cooperative agreement. I have been the state survey coordinator for the Cooperative Agricultural Pest Survey (CAPS) in Tennessee since 2014 as a representative of UTIA. CAPS allows our state to survey for invasive pests and diseases.