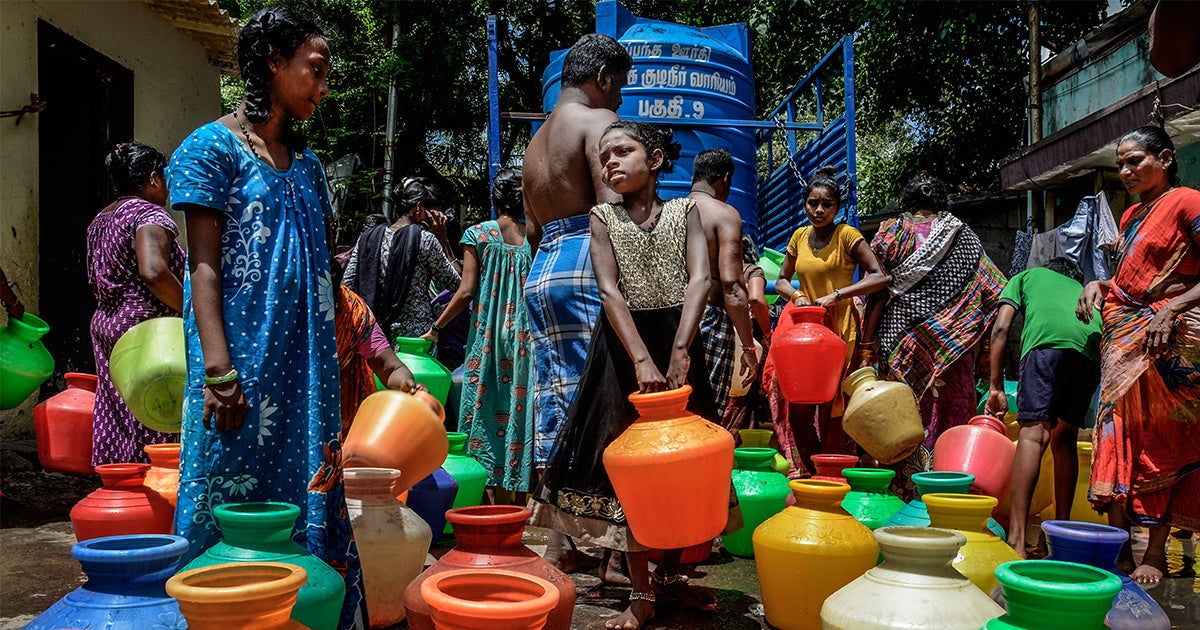 People in Chennai gather near the metro water supply tanker to collect the water for their daily usage on June 29. Atul Loke / Getty Images

A special train loaded with 2.5 million liters (approximately 660,000 gallons) of water reached the parched Indian city of Chennai Friday, The Times of India reported. The water was sent to relieve India’s sixth-largest city, which is running out of water due to lack of rain.

The train left the station in Jolarpet around 7:10 a.m and arrived in Chennai around noon, where it was greeted by state ministers.

It was scheduled to depart Thursday, but was delayed due to leaking in the valves connecting the water tank to the railway station, Reuters reported.

The train is set to be the first of many: Tamil Nadu Chief Minister Edappadi K Palaniswami promised in June to send trains carrying 10 million liters (approximately 2.6 million gallons) a day, The Hindu Business Line reported. It is part of an attempt to serve a city whose four reservoirs have all run dry.

Up until now, water has been transported into the city via some 15,000 tankers a day, more than 9,000 from the city and another 5,000 from private companies, according to The New York Times. People living on the outskirts of the city block roads when the tankers pass out of concern that all the water is being directed towards companies, city residents and hotels, Reuters reported.

Palaniswami spoke to the problem of distribution when he announced the plan to send the trains. He said Chennai Metrowater was inundated with requests for extra supplies from apartment owners.

“We cannot supply water only to the affluent but also need to take care of poor people. Due to the severe shortage, I urge people to use water sparingly,” he said, as The Hindu Business Line reported.

The crisis has disrupted daily life, causing some schools to close and prompting some businesses to urge their employees to work from home, Reuters reported.

28-year-old Chennai resident Rushyant Baskar told The New York Times he relies on neighbors to share private tankers or to text him when a city tanker arrives. He said he was sleeping less and his mother did not feel she could take time to visit relatives across town. He said in the past people had come to the city in search of money.

“Now we run after water,” he said.

The water shortage is partly due to development and mismanagement, The New York Times explained, as lakes and fields that would have collected rain have been built over. Groundwater is also overused as a primary source of water, rather than a backup.

But it is also made worse by the climate crisis, which is predicted to cause weaker monsoons in South Asia. Southern Tamil Nadu saw below average rainfall the last two years.

Maximum temperatures have also risen in the city by 1.3 degrees Celsius since 1950, Indian Institute of Tropical Meteorology climate scientist Roxy Mathew Koll told The New York Times. The heat both increases demand for water, and makes it evaporate faster.