India’s Sixth-Largest City Is Almost Out of Water 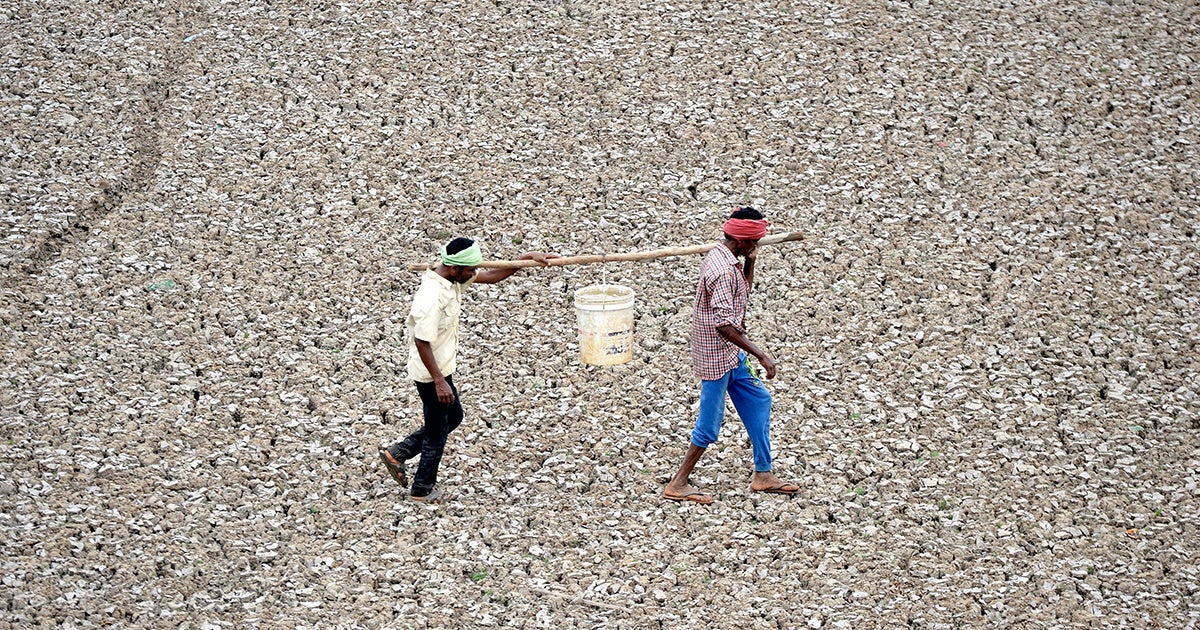 In this photo taken on June 20, Indian worker carry the last bit of water from a small pond in the dried-out Puzhal reservoir on the outskirts of Chennai. ARUN SANKAR / AFP / Getty Images

As much of India bakes in a deadly heat wave, the country’s sixth largest city is running out of water, Time reported Thursday.

In Chennai, home to nearly 4.6 million people, four major reservoirs are running dry. The monsoon has been delayed, and rainfall has fallen 99 percent in the region from June 1 to 19, while temperatures have reached 104 degrees Fahrenheit.

“We are facing one of the worst water shortages in recent years. The water situation has been very bad for the last month. And it will be worse if there is no rain in the coming days,” Chennai resident Rajasimhan told BBC News. “There is no water through the taps.”

A weaker monsoon season in South Asia is one of the predicted outcomes of the climate crisis, Al Jazeera reported. The entire region has seen below average rainfall for the last five years. In southern Tamil Nadu, the state where Chennai is located, monsoon rains were 62 percent below normal last year. They were also weak in 2017, leading to a depletion of groundwater and the drying out of four major lakes: Chembarambakkam, Poondi, Red Hills and Cholavaram. Dramatic satellite images from Maxar show the depletion of Lake Puzhal, the city’s largest reservoir, between June of 2018 and 2019, CNN reported.

Tamil Nadu is facing severe water crisis. The satellite image shows comparison between last June & this June of Puzhal lake. What is the next step #EdappadiPalanisamy government is taking? Many water bodies have dried up.#WaterScarcity #ChennaiWaterCrisis #water pic.twitter.com/RkN1ZTQsac

State fisheries minister D Jayakumar told Al Jazeera that the government was moving approximately 400 water tankers on 9,000 trips across the city to help the thirsty population.

But the water is not coming fast enough for some. At least 550 people were arrested Wednesday at a demonstration outside the municipal building of Coimbatore, CNN reported. They held empty water containers and accused the government of mismanagement.

There have also been reports of fighting over water and of water trucks being hijacked, CNN reported.

There is some temporary relief in store for Chennai. There were reports of rain on Thursday, but the Indian Meteorological Department told CNN it would not relieve the drought.

“Unfortunately this is forecast to be light to moderate rain and the reservoirs are almost dry. So, this won’t help in replenishment but will just give respite from the heat,” the department said. “The proper rain to fill up the reservoirs isn’t expected until November.”

The much awaited Chennai rains.. pic.twitter.com/6tgxPZRdoR

Due to a combination of climate change and mismanagement, India overall is facing the worst water crisis in its history. A report from a government think tank released in 2018 found that 200,000 Indians die each year from lack of access to water and demand would double supply by 2030.