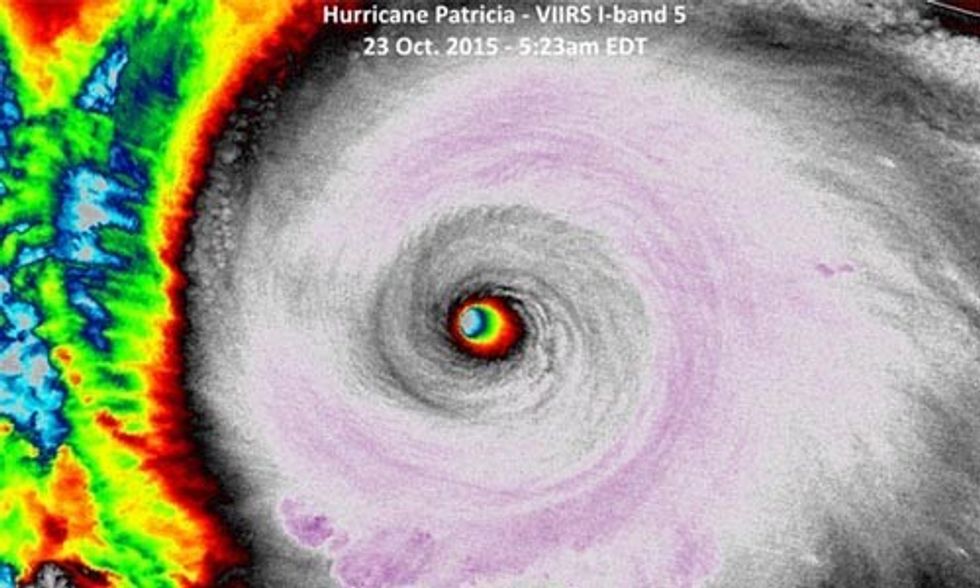 Stunning, historic, mind-boggling and catastrophic: that sums up Hurricane Patricia, which intensified to an incredible-strength Category 5 storm with 200 mph winds overnight.

At 2:46 a.m. EDT Oct. 23, an Air Force hurricane hunter aircraft measured a central pressure of 880 mb in Patricia, making it the most intense hurricane ever observed in the Western Hemisphere. The aircraft measured surface winds of 200 mph, which are the highest reliably-measured surface winds on record for a tropical cyclone, anywhere on the Earth. The previous strongest Eastern Pacific hurricane was Hurricane Linda of 1997, with a pressure of 902 mb (estimated from satellite imagery). The strongest Atlantic hurricane on record was Hurricane Wilma of 2005, with an 882 mb central pressure. Patricia does not beat the record-lowest pressure in the Western Pacific, though, which is held by Super Typhoon Tip of 1979: 870 mb.

Latest visible satellite image of Hurricane Patricia.
Wind barbs from the early-morning October 23, 2015 Air Force hurricane hunter mission into Hurricane Patricia, off the Pacific coast of Mexico. The aircraft measured winds of Category 5 strength (dark pink colors) at their flight level of 10,000 feet across a 20-mile diameter region. Winds at the surface as measured by a dropsonde were 9 percent lower compared to winds measured at flight level, so we likely there was a region at least 15 miles in diameter of Category 5 winds at the surface. Image credit: Levi Cowan, tropicaltidbits.com

Patricia's central pressure dropped an astonishing 100 mb in 24 hours, making it the fastest-intensifying hurricane ever observed in the Western Hemisphere. Patricia's pressure at 5 a.m. EDT on Thursday, Oct. 22, was 980 mb, and was 880 mb at 5 a.m. EDT on Friday. The previous record was a drop of 97 mb in 24 hours for Hurricane Wilma of 2005 (between 1200 UTC 18 October - 1200 UTC 19 October), according to the official National Hurricane Center (NHC) report for the storm. Patricia's intensification rate was very close to the WMO-recognized world record for fasting-intensifying tropical cyclone: 100 millibars in just under 24 hours by Super Typhoon Forrest in the Northwest Pacific in 1983.

Patricia is estimated to have intensified 85 knots (100 mph) in 24 hours, from a tropical storm to a Category 5 hurricane. In the Eastern Pacific, Hurricane Linda of 1997 is the only storm on record to have intensified at this rate. The Atlantic's record holder for largest wind increase in 24 hours is held by Hurricane Wilma of 2005, which intensified from a 60-knot tropical storm to a 150-knot Category 5 hurricane—an increase of 90 knots (105 mph). Air Force reconnaissance observations indicated that the eye of Wilma contracted to a diameter of 2 n mi during this time; this is the smallest eye known to NHC staff. Patricia's eye diameter was 8 miles at it's peak strength.

Patricia the Third Strongest Tropical Cyclone in History (by wind)

However, it is now recognized (Black 1992) that the maximum sustained winds estimated for typhoons during the 1940s to 1960s were too strong. The strongest reliably measured tropical cyclones were both 10 mph weaker than Patricia, with 190 mph winds—the Western Pacific's Super Typhoon Tip of 1979, and the Atlantic's Hurricane Allen of 1980. Both storms had a hurricane hunter aircraft inside of them to measure their top winds. Haiyan's winds were estimated using only satellite images, making its intensity estimate of lower confidence.

Dr. Hugh Willoughby, former head of NOAA's Hurricane Research Division, had this to say about the winds measured in Super Typhoon Nancy and the other high-end typhoons from this list from the 1960s:

"I would not take the winds seriously because reconnaissance meteorologists estimated them visually. A decade later when I flew with the VW-1 hurricane hunters, we had the same Doppler system used to measure the winds of Typhoon Nancy. It tracked the aircraft motion relative to the (possibly moving) sea surface. It couldn't get a coherent signal in high winds because the beam reflected from both the actual surface (whatever that is) and blowing spray. Visual estimates are dubious because the surface (under the eyewall!) is hard to see unless you are flying below cloud base (200-300 m) and also because appreciably above 115 mph, it's completely white with blowing spray. We used to think that we could estimate stronger winds from the decreasing coverage of slightly greenish patches where the spray was thinner. I now think that we were kidding ourselves. In those days the distinctions among wind gust, sustained one-minute winds, etc., were less well defined than they are now. So we may never know the 1960s reconnaissance data really means!"

At the same time, we should keep in mind that not all hurricanes are sampled while at peak strength. Satellite methods of estimating intensity, such as the Dvorak technique, cannot capture the most extreme peak winds and central pressures found in storms such as Patricia and Wilma. It is possible that previous hurricanes, such as the 1935 Labor Day hurricane that devastated the Florida Keys, had intensification rates and peak winds on par with Patricia. The bottom line is that Patricia is at the very highest end of what we can expect in terms of a small, extremely intense hurricane.

The size of a hurricane also shapes its destructive power. Although Sandy was never a Category 4 or 5 hurricane, its longevity and size enabled it to move as much water in the form of waves and surge as Category 5 Katrina. We are lucky that Patricia is no larger than it is—although this is cold comfort for those who will be directly affected.

Figure 4. MODIS image of Hurricane Patricia as seen from NASA's Terra satellite on Thursday, October 22, 2015. At the time, Patricia was a Category 4 storm with 130 mph winds. Image credit: NASA

Satellite loops early Friday afternoon showed that Patricia’s cloud tops had begun to warm, indicating weakening, and with wind shear now a moderate 10 - 20 knots and interaction with land beginning to occur, Patricia will likely weaken to 155 - 175 mph winds by landfall. The storm's expected turn toward the northeast has begun, and the storm is beginning to accelerate toward the coast of the Mexican state of Colima.

At particular risk is the city of Manzanillo, a regional center that straddles the back of a bay spanning several miles. On its current track, it appears that Patricia could make landfall sometime between 6 and 10 p.m. EDT just to the northwest of Manzanillo—a trajectory that raises the odds of a catastrophic storm surge in or near Manzanillo. Patricia’s strongest winds are confined to a relatively small area, with hurricane-force winds only spanning a range of 30 miles from Patricia’s center. Category 5 winds of 156+ mph cover an area 15 miles across. Wherever those winds are focused, we can expect gigantic waves atop a devastating surge. An unnamed 1959 hurricane—the deadliest in Northeast Pacific history, with an estimated 1,800 direct and indirect fatalities—struck near Manzanillo on October 27 (see YouTube newsreel footage below). In a Friday afternoon blog post, storm surge expect Dr. Hal Needham says he expects a storm surge of 16.5 ft (5 m), which will be accompanied by large, destructive waves. This would be the largest storm surge in the modern history of Western Mexico.

After landfall, Patricia will slam into very rugged terrain, triggering torrential rains with the risk of severe flooding and mudslides. The mountainous trek will shred Patricia’s low-level circulation quickly, but the hurricane’s upper-level circulation will proceed quickly northeastward, arriving near South Texas by Sunday. Models suggest that a nontropical or hybrid low-pressure center may develop near the upper-level center at that point. Patricia’s presence will exacerbate a multi-day rain/flood episode already under way across Texas, with widespread 4” - 8” rainfall amounts across the eastern half of the state expected between now and Monday. Localized totals well over a foot are quite possible.

iCyclone Storm Chasers in the Path of Patricia

Storm chaser Josh Morgerman, who intercepted Super Typhoon Haiyan at landfall in Tacloban in the Philippines, is aiming to be in the path of Hurricane Patricia's eye at landfall in Mexico. From the iCyclone Facebook page:

"7:30 a.m. Friday (Jalisco): Erik and I are staring of a gun. Incredible Hurricane PATRICIA—possibly the most intense hurricane in recorded history—is just offshore with winds of 175 knots (200 mph). The NHC forecast track takes the center right over our current location. To say we have conflicted feelings is an understatement. We want to see history unfold. We also don't want to die. Main task—as soon as we have daylight—is to find a really good building in Perula or nearby La Fortuna. We're thinking closer to the main road—away from the water."