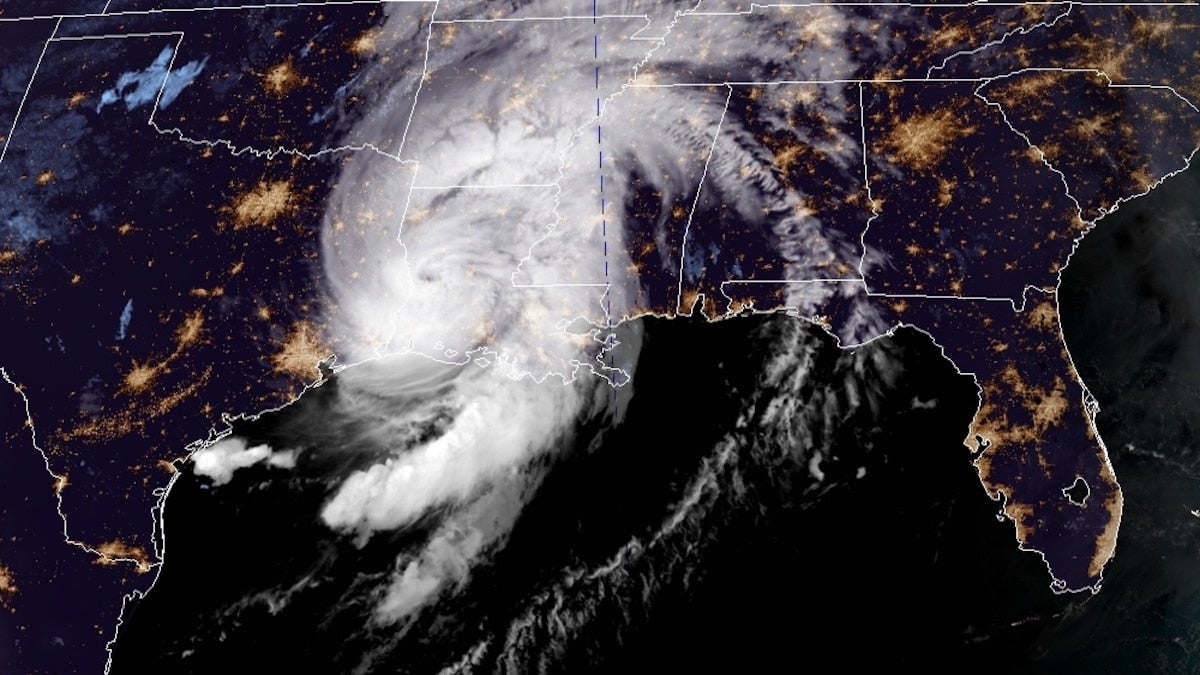 In the middle of the night, Hurricane Laura made landfall, hitting the Gulf Coast in Louisiana with record-setting 150 mph winds, according to the National Hurricane Center, which warned of an “unsurvivable” storm surge.

“Unsurvivable storm surge with large and destructive waves will cause catastrophic damage from Sea Rim State Park, Texas, to Intracoastal City, Louisiana, including Calcasieu and Sabine Lakes. This surge could penetrate up to 40 miles inland from the immediate coastline, and flood waters will not fully recede for several days after the storm.”

The storm weakened rapidly as it moved inland, losing strength as it was downgraded to a category 3 hurricane. Early Thursday morning, it was down to a category 2 and the National Hurricane Center expects it will weaken to a tropical storm as it turns northeast and moves over Arkansas Thursday.

“At the time of landfall, Laura was a ferocious looking hurricane with a clear circular eye, an intense eyewall, and tightly-coiled surrounding spiral bands,” the National Weather Service said in an update on the storm early Thursday, as The Washington Post reported.

Cameron, Louisiana on the Gulf Coast, about 35 miles east of the Texas border, bore the brunt of Laura as it moved on shore with near record winds. In Lake Charles, a city of 78,000 people, buildings shook as the storm’s winds ripped through the city’s streets.

“There will be parts of Lake Charles underwater that no living human being has ever seen before,” Louisiana Gov. John Bel Edwards told WWL Radio, as CNN reported. “We are marshaling all of our people and assets to go in … and start a very robust search and rescue effort.”

The National Hurricane Center warned that the storm surges would make a low-lying area, like Cameron, part of the Gulf of Mexico until the storm had passed and the floodwaters receded, as The New York Times reported.

In the run up to the storm, governors from both Louisiana and Texas urged people to evacuate. “I’m asking people right now to pay attention to this storm, to get out of harm’s way,” said Edwards during a briefing before the storm’s arrival, as The New York Times reported. “Understand, our state has not seen a storm surge like this in many, many decades. We haven’t seen wind speeds like we’re going to experience in a very, very long time.”

While the storm is weakening, its heavy winds are still ripping through Western Louisiana and grazing East Texas, causing widespread power outages. Furthermore, the hurricane is dropping five to 10 inches of rain over a wide swath of the Gulf Coast, and up to 18 inches in some areas, according to The Washington Post. That intense rain is leading to flash flooding in some areas.

The National Hurricane Center warned that just because the storm is weakening does not mean it is safe. The effects will continue to be felt through the weekend for areas east of the Mississippi River.

In a statement Thursday morning, it said:

“It should be noted that strong hurricanes like Laura are not just coastal events. Even though Laura’s highest winds will decrease quickly as it treks inland, significant impacts from heavy rains and strong wind gusts are likely through at least tonight across portions of Louisiana and Arkansas. Some strengthening as an extratropical cyclone is expected when the storm moves over the Atlantic waters late this weekend and early next week.”