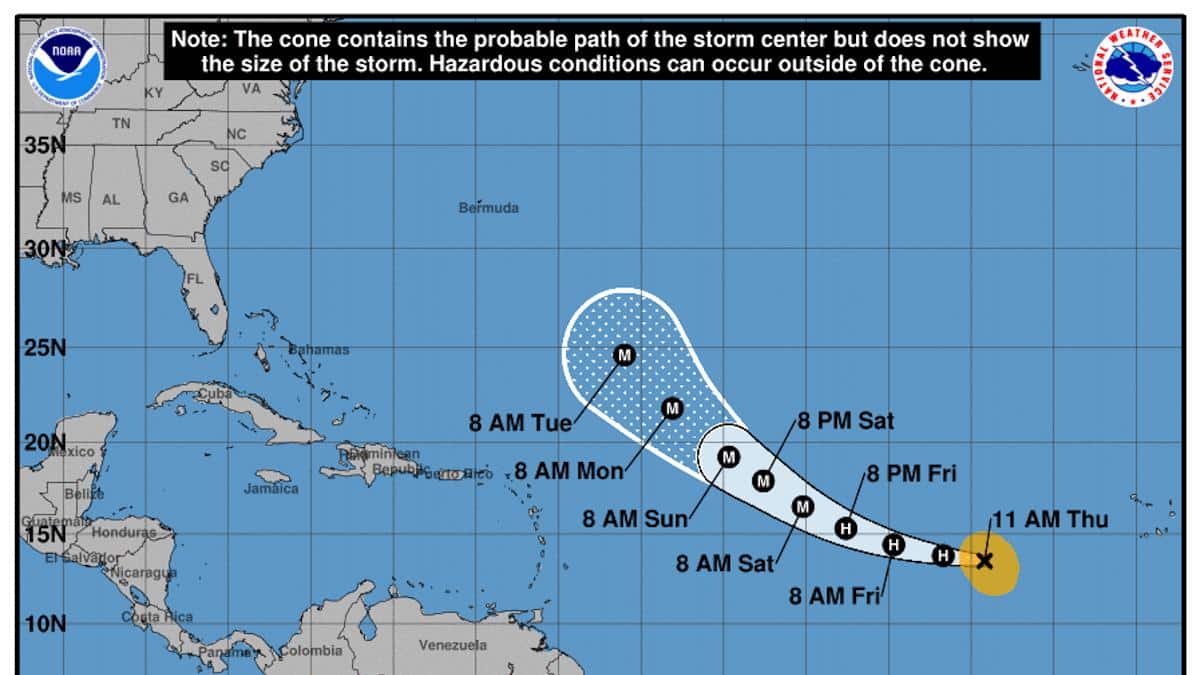 As rains from Hurricane Ida inundate the Northeast, another hurricane has formed in the eastern tropical Atlantic.

Hurricane Larry formed early Thursday, NOLA.com reported. It currently has maximum sustained winds of 80 miles per hour, according to an 11 a.m. Atlantic Standard Time (AST) update from the National Hurricane Center (NHC), making it a Category 1 storm for now.

“Steady to rapid strengthening is forecast during the next couple of days, and Larry is expected to become a major hurricane by Friday night,” NHC wrote.

Further, the NHC predicted that it could reach wind speeds of 130 miles per hour by Sunday night, making it a Category 4 storm, the South Florida Sun Sentinel reported.

Larry first became a hurricane around 5 a.m. AST, according to the NHC. At the time, it had winds of up to 75 miles per hour. Within six hours, it had gotten “larger and a bit stronger,” NHC said.

Hurricane #Larry Advisory 8: Larry is Larger and a Bit Stronger. Steady to Rapid Intensification Likely in the Coming Days. https://t.co/VqHn0u1vgc

As of the most recent update, the storm is located about 660 miles west from the southernmost Cape Verde Islands. There are currently no coastal watches or warnings in effect, and NOLA.com reported that it does not immediately threaten any land.

However, the South Florida Sun Sentinel said that the forecast showed its path moving west and then northwest towards the Caribbean Sea through Sunday. Hurricane forecast maps can only predict a storm’s movement five days out, but NHC said the storm could become one of the longest-running tropical systems on record.

11 AM EDT, Sep 2nd — A Special Tropical Weather Outlook has been issued to introduce a new system ESE of the Cabo Verde Islands. Some additional development could occur in the next 24-h & this system has a low (30%) chance of development.

The 2021 hurricane season was forecast to be more active than usual. In early August, the National Oceanic and Atmospheric Administration (NOAA) put the chances of an above average season at 65 percent.

“A mix of competing oceanic and atmospheric conditions generally favor above-average activity for the remainder of the Atlantic hurricane season, including the potential return of La Nina in the months ahead,” Matthew Rosencrans, lead seasonal hurricane forecaster at NOAA’s Climate Prediction Center, said at the time.

It is not clear whether the climate crisis is making hurricanes more frequent, according to the Center for Climate and Energy Solutions. However, it does increase the chances that the storms that do form will be more dangerous, as they are wetter, more intense and slower moving.

This was the case with Hurricane Ida, CNN noted.