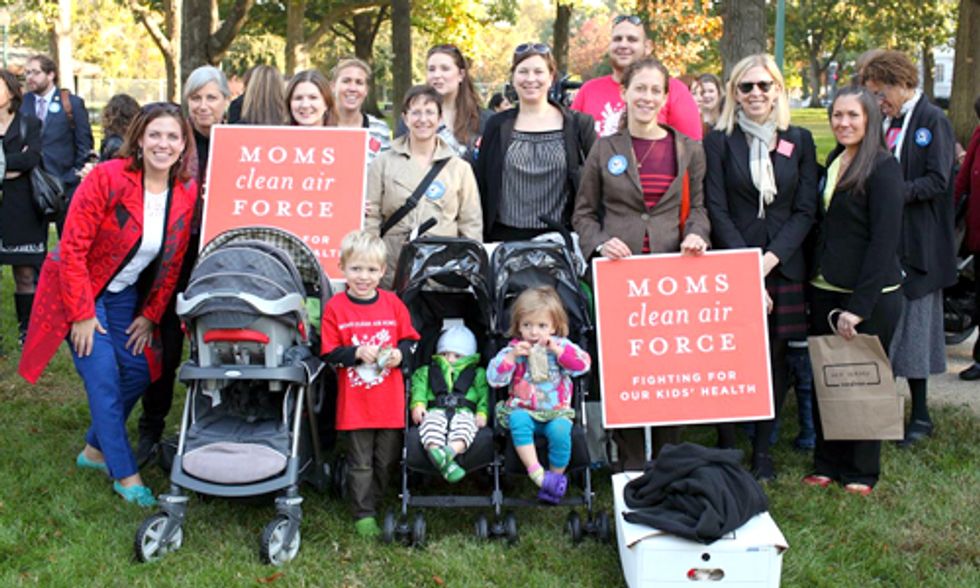 A Stroller Brigade of hundreds of parents and their children descended on the nation's capital today to call on Congress to protect their families from toxic chemicals.

The demonstration for safer chemicals was timed to coincide with the U.S. Senate's consideration of reforming federal laws overseeing toxic chemicals, which organizers say is the most serious reform attempt in nearly 40 years.

Toxic chemicals—many of which are linked to cancer, birth defects, early puberty, asthma and other serious illness—have been found in common consumer products ranging from household cleaners to children’s products and building materials.

Stroller Brigade organizers say the chemical industry has been blocking progress on meaningful reform, spending a staggering $30 million for lobbying in the first two quarters of this year alone.

"Americans have woken up to the fact that known toxic chemicals get into our homes and our bodies, often through the products we buy, and that the government doesn't do a thing about it," said Andy Igrejas, director of Safer Chemicals, Healthy Families, the coalition that hosted today's event.

"We need reform that truly protects American families from chemicals that contribute to the rising rates of childhood cancer, learning disabilities, infertility and other health problems. The current proposal before Congress does not meet that standard," he said.

A rally on Capitol Hill, which kicked off at 10 a.m., featured parents, children and cancer survivors from around the country. Families also met with their senators to urge federal reform that will:

Among the parents in attendance was actress Jennifer Beals, who has been an outspoken advocate for safer chemicals.

“We are living in the most extensive human experiment imaginable, one that is without our consent because it is largely being conducted without our knowledge,” Beals said. “We look to our government to provide our basic rights of clean air and water and yet right in front of us, chemicals have for the most part gone untested in their effect on human health.”

Representatives from Alaska visited their senators, including two delegates from St. Lawrence Island in Alaska who hand-delivered chemical policy reform resolutions from the villages of Gambell and Savoonga. The Alaska Nurses Association hand-delivered a similar resolution, which says in part, “the Alaska Nurses Association advocates for meaningful chemical policy reform both nationally and on the state level that reduces the use of toxic chemicals and requires that less harmful chemical be substituted whenever possible and ensures adequate information on the health effect of chemicals is available to the public before these chemicals are introduced on the market such as is the process outlined in SB 1009.”

New information about product testing was revealed at the event. The new data, commissioned by Healthy Stuff and the Center for Health Environment and Justice, found common products with high levels of phthalates, a group of chemicals linked to hormone-disruption, cancer and infertility. Among the products were dumbbells, over-the-ear headphones, vinyl flooring and a Spongebob Square Pants rain poncho for children.

"Diverse organizations of doctors agree on the urgency of reforming our toxic chemical laws and the critical elements needed for it to be meaningful," said pediatrician Dr. Yolanda Whyte, citing statements by the National Medical Association, American College of Obstetricians and Gynecologists and American Academy of Pediatrics.

"The proposal before Congress does not meet that test," Whyte said. "We're here to tell Congress that reform needs to be meaningful and credible with the public health community."

Among the critical elements Whyte cited were protection of vulnerable populations, looking at all the sources of exposure to a chemical and providing a strictly health-based standard of review.

Sara Chieffo, legislative director of the League of Conservation Voters, said,  “To win the support of moms across the country, reform of our toxic chemical laws must be real. Parents are asking the Senate to pass reform that will truly protect the public from toxic chemicals.”