Hiker Snaps Terrifying Selfie From 'Edge of the World' 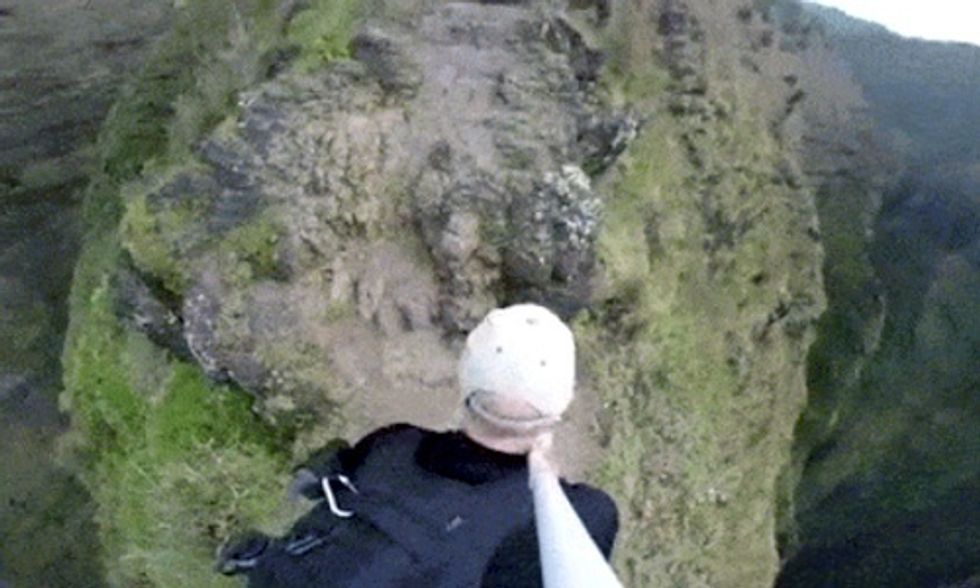 The Awa'awapuhi Trail on the island of Kauai, Hawaii is breathtaking, offering gorgeous views of Kauai's famed Na Pali coast.

But one intrepid hiker and photographer, Scott Sharick, kicked it up a notch by going beyond where the trailhead ends and walking out onto a horrifyingly narrow ridge with a GoPro in hand to capture the moment.

"Standing on the edge of one of the ridges on the Na Pali coast is very invigorating," Sharick told the Huffington Post. "It makes one feel so small to be in such a vast place where it looks like you are on the edge of the world."

This is strictly prohibited by the park. A warning on its website reads: "DANGER: Do not venture beyond the safety railing at the end of the trail! Footing is extremely unstable, and the drop to the valley floor below is over 2,000 feet."

Dangerous selfie-taking is becoming a real problem. To give you some perspective, despite all the hype this summer over shark attacks, more people actually died this year while trying to take a selfie with the animals than from shark attacks. Governments from Australia to Russia have launched awareness campaigns and closed prominent landmarks because people wouldn't stop taking dangerous photos. And so many people were getting too close to bears in a Denver area park just to take a selfie with the creatures that the park was forced to close for a period of time.

Sharick acknowledged the danger: "Anyone hiking should be aware of the challenges of any given hike. And they should not go beyond their means just to see a beautiful view or to get a picture."

Watch him walk out on a narrow ridge with a 2,000-foot drop on either side:

For some more absolutely amazing views from the hike, check out David Chatsuthiphan's blog post on Unreal Hawaii.