113 Million Americans Under Heat Warnings Ahead of July 4 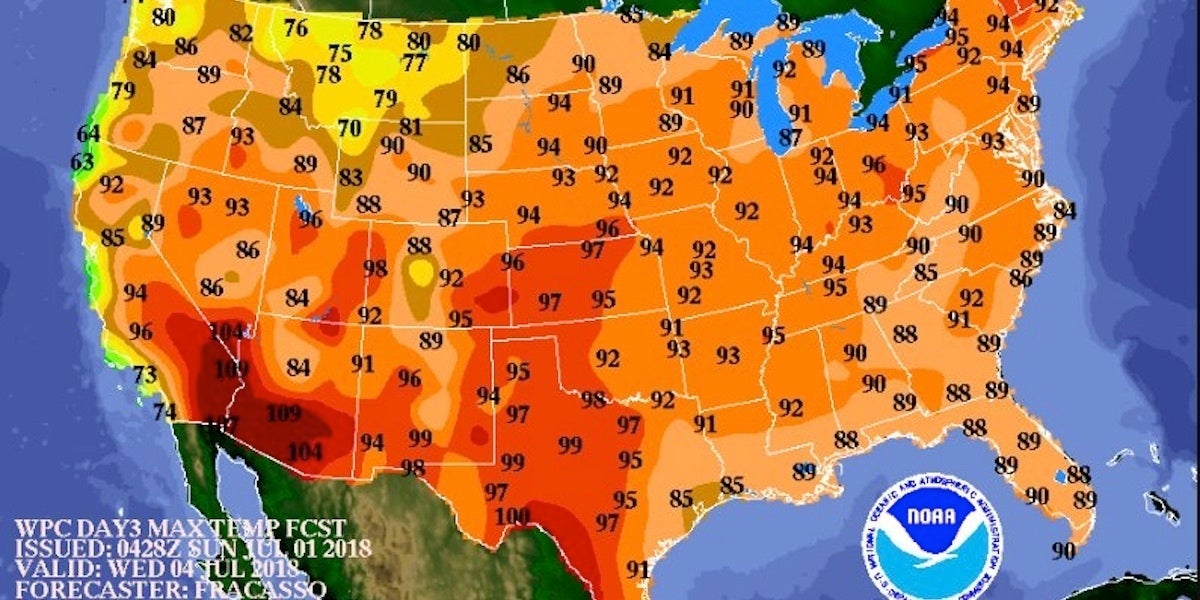 The National Weather Service (NWS) predicts that the “dangerous” heat wave sizzling the central and eastern U.S. will persist through Independence Day.

The eastern U.S. might experience its first heat wave of the year, with temperatures predicted to top triple digits in Syracuse, New York on Monday, Burke said.

Elsewhere, he added, the humidity in St. Louis, New York, Chicago and Boston will make temperatures in the mid-90s feel more like 100-to-105 degrees Fahrenheit. Baltimore and Albany might also hit 99 degrees.

“It’s going to be a hot week everywhere east of the Rockies,” Burke said. “At risk populations should definitely seek cool shelter.”

Dangerous heat wave will continue from the Plains to the Midwest, Mid Atlantic, and the Northeast U.S. through the Independence Day Holiday. High temperatures pushing 100 degrees will be possible in the major I-95 cities. Limit outdoor exposure, especially during peak heating.

Overnight lows could remain above a sweltering 75 degrees, especially in urban areas.

“The vast expanse of concrete, pavement and brick will give off heat through the night,” AccuWeather Senior Meteorologist Alex Sosnowski
explained.

The extensive heat wave comes from an “impressive” upper level ridge over the eastern U.S.,
according to NWS.

“This is leading to widespread subsidence aloft, and thus mostly sunny skies and hot conditions,” the agency said. “Temperature anomalies on the order of 10 to even 20 degrees above normal are expected on Monday, with the potential for some record high temperatures to be set across the northeastern states.”

Hot days and heatwaves can bring stress our bodies. The danger is especially acute in old age or for individuals with health concerns such as heart disease.

This July 4, remember to stay hydrated, take breaks in the shade or in places with air conditioning and limit strenuous outdoor activities, NWS
advised on Twitter. Also, never leave kids or pets unattended in vehicles.

With today and tomorrow being the hottest days during this heat wave (heat indexes of up to 100 to 110+), the chances for heat exhaustion and heat stroke will be at their highest. Know the signs and the proper actions to take! pic.twitter.com/SOymZucihs